In December, my friend Trish announced she and her husband Mark were expecting their first child in August.

It was awesome news and I was ecstatic for them, and selfishly excited for myself that after years of being a long distance aunt to some of my other friends' kids, this was my chance to be an in-town aunt. I wanted to be a part of the experience from start to finish. 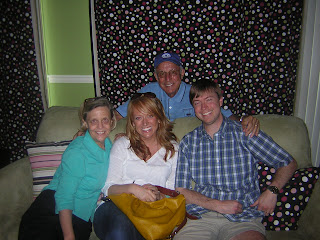 Pregnancy and babies also opens up a whole world of possibilities for a blogger like me trying to do new things. I decided to test the waters and asked Trish one day, over the phone, "Would you care if I came with you to a sonogram, or did something with the baby, for the blog?"

Truthfully, I don't completely remember her response (it was a long time ago), but I remember not being able to read her reaction. We were on the phone, which can be tricky, and for all I knew, she could be rolling her eyes, shaking her head no, or completely checked out of the conversation entirely. She never really said, "No," but she never said, "Yes," either.

"Think about it," I said, "Talk to Mark, see what he thinks. It's not a big deal either way, just an idea."

At first I was somewhat surprised that she didn't immediately say, "Sure!," since Trish is one of my least modest friends, and she and I are really close. But the more I considered my own request, the more I felt badly for even asking.

If someone asked me if they could "tag along" with me to the gynecologist, friend or not, I would have emphatically responded, "Hell no. Absolutely not. Not a chance." 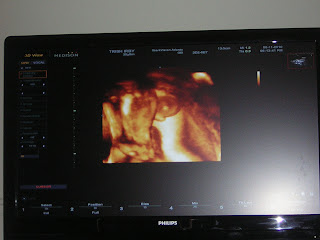 Even if it was for a blog, or for a million dollars, whatever, doesn't matter, I would have said, "Sorry, I don't think so."

And this is a baby we're talking about here. These doctor's appointments are important; they are special. We're not just checking on things downstairs to make sure everything is working properly. At these appointments, we're checking on a living person growing inside of another living person.

So when Trish didn't respond right away, I thought that maybe she felt like I'd crossed the line on our friendship and really put her on the spot, which I did. So I dropped it, feeling embarrassed and bad for having put her in that position. And for several months, we never talked about it again.

And then randomly, I got an email from Trish, telling me that she and Mark's 3-D sonogram was scheduled for Day 257, if I'd like to still come for the blog.

"I'll be there," I told her, trying not to sound overeager, even though I was jumping out of my skin excited to make Day 257's thing I've never done before to see a live sonogram.

I was the first to arrive at Stork Vision, where the sonogram was going to be taken. I told the receptionist, who (hopefully) could tell that I wasn't pregnant, that I was here for my friend Trish. I wondered if he thought that I was some sort of weird friend who was obsessed with babies. 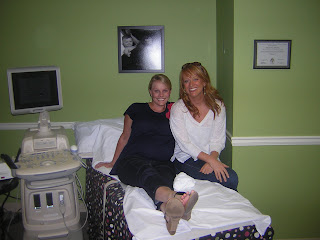 Trish's parents, who I know very well, arrived next, bring the count of non-pregnant people in the waiting room to three. (The number of pregnant people was still zero.) Upon seeing them, I immediately felt guilty for barging into this very special family experience.

"I hope you guys don't mind that I invited myself to this family event," I said sheepishly.

Trish's dad, Roger, grabbed my shoulders, smiled and said, "Gallman, you ARE family." And then he gave me a big hug.

While we waited for Trish and Mark to arrive, we flipped through pictures of other babies who already had their 3-D sonogram pictures taken at Stork Vision.

Several things surprised me before we even got started with the sonogram. First, Stork Vision is in no way affiliated with Trish's doctor, or any doctor at all that I could tell. They are an outside company who make their money from curious families who want to see their still-cooking babies before they arrive. 3-D sonograms are not medically necessary, and Trish told me a lot of families elect not to do them at all.

The sonogram technician led us back to the examining room, which looked more like a living room set up for a sporting event. A couch, a love seat, and a huge flat screen TV. The only thing missing were snacks and beer.

Trish, now completely familiar with sonograms and exactly what to do when getting one, climbed up on the examining table in the corner of the room and laid down on the table.

She announced to the sonogram tech, and to us, that she drank a lot of water that afternoon. Apparently liquid helps the baby move around and makes him easier to see.

Well it must've worked, because after a few trips across Trish's belly with the scanning wand (that's what it's called, I looked it up), the technician found Baby Will. 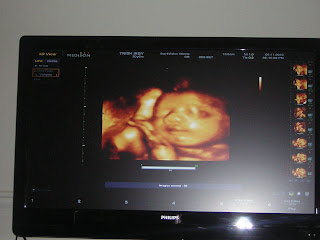 Soon after she found him, we all saw him, right there on the big screen. I couldn't believe it.

I mean, yes, that's what we came to see, and I fully expected to catch a glimpse of the little bambino, but I just didn't expect to see him so well. And so quickly. The bottoms of his feet (which spent most of the day kicking Trish during her third trimester), his perfect spine, and his delicate chin resting on his little hand as if he was contemplating something super important.

We stared at his little face for a while. I marveled at his bow-like mouth and decided that I thought he looked like Mark, but with Trish's nose. And much to the delight of everyone, the sonogram technician pointed out that Will had hair.

She moved the wand again, pressing firmly on Trish's belly and settled in one place. I squinted my eyes, but couldn't really tell what I was looking at. I didn't have to wait long for the tech to tell me.

"And Dad, Grandpa, that's his penis," she said, "And there are his testicles."

"Wow," Mr. Wise said with all the earnestness of a proud grandfather. His response was so honest; his timing, impeccable. We all laughed loudly.

No surprise, she stayed on the penis for a while.

Later Grandpa Roger said that based on what he saw, "That little William is going to be one popular boy." I was loving it. I don't know what I loved more, the fact that I could see what Trish's baby looked like, or the family commentary going on in the background. 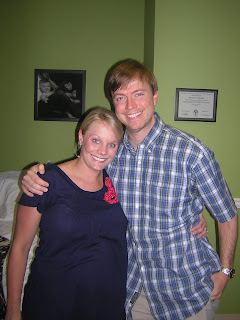 After a while, Trish lifted her head off the pillow. She said she looked at me because she was concerned that I hadn't said a word since the sonogram started. All she could see was my mouth. And it was wide open.

I was truly amazed. Stunned into silence.

"I'm in shock," I admitted. "This is most insane thing I've ever seen. I mean, you can see what he looks like!"

Trish and her family agreed at the awesomeness, and in case registering for gifts like a Boppy, a Diaper Genie, and an Exersaucer hadn't done the trick, seeing their child's precious face on a flat screen made all real. Really real.

"Babe, we're gonna have a baby," Trish said to Mark.

Indeed, you are Trish, and he's a cute one too. I know, because I saw him. I freaking saw him on a television screen!

William James was born August 17, 2010, weighing in at a healthy 8.8 pounds, meaning I did not reach my goal to post this blog before he was born. No surprise, he's even cuter in person than he is on TV.
Posted by Stephanie Gallman at 11:18 PM