Though my friend David hasn't really made a whole lot of blog appearances, I'll have to say what he's lacking in quantity he's definitely making up for in quality: drive-in movies, glassblowing, and his idea for Day 342's thing I've never done before: DragonCon.

According to the event's website, DragonCon is, "The world's largest fantasy/Science-Fiction convention held annually in Atlanta every Labor Day weekend." 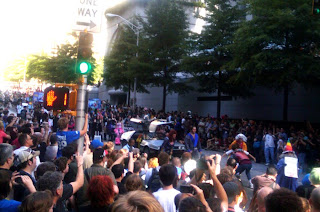 Now having attended the festivities, I think I'd like to rewrite a more appropriate description. I'd call DragonCon (sorry, Mom), "The weirdest fucking thing I've ever seen. So fucking weird."

I'm not sure when he came to love DragonCon, but David and his brother (who flew in from New York City exclusively for the event) are big fans. They've attended in years past and had already hit downtown for Friday night's festivities. His brother opted to sleep in on Day 342, but David picked me up nice and early Saturday morning so we could catch the parade.

"It's the best people watching ever," he said to me as we made our way downtown.

"Better than the airport?," I asked.

But when I pressed David for more details about what exactly happens at DragonCon, he couldn't really elaborate. 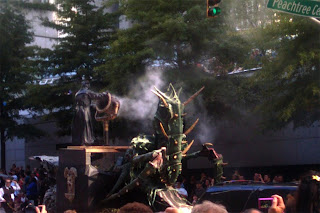 "I mean, what's the point of the costumes? Is there some sort of contest? Is it a convention? Are there classes that people take?"

David paused and stared at me, like I had backed him into a corner with my line of questioning.

"I really don't know," he said calmly. "To me, it's just a bunch of freaks dressed in costume."

That sounded good enough for me, though since I'm not really a Halloween person to begin with, it was hard for me to imagine why anyone would enjoy dressing up in costume for seemingly no reason at all.

Traffic was terrible on our way downtown thanks to DragonCon and plethora of other events going on downtown. We got stuck at a red light for several minutes and had to watch part of the parade from the car. From what I could tell, it looked like a normal parade with floats and bands, lots of little kids watching. And then I looked out my window and saw people on either side of the street wearing animal ear headbands and angel wings, holding wands walking towards the parade, and I had to consider that this parade was actually very different from anything I'd ever seen before .

We parked the car and rushed over to the parade. What surprised me the most right away was the amount of people that this event had drawn. I was there simply as a spectator, and I had to assume that others were also, but mostly these people had come out, in costume, to fully engage and embrace DragonCon. 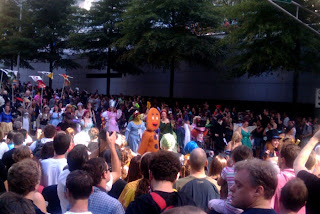 Because we arrived late, it was difficult for me to see a lot of the parade, but based on what I had seen so far, there was no doubt Atlanta had been overrun by people with extremely vivid imaginations, and their creativity had manifested in costumes and dragon floats.

The highlights of the parade for me were the "cast" of Shrek including an over-sized Gingy, and the "cast" of Back to the Future and the Delorean. The parade ended with the "cast" of Star Wars and a George Lucas lookalike that left everyone in the crowd asking each other, "Is that him?!" "There's no way that's him!"

David and I laughed about how many of these parade participants were leading double lives.

"What if you saw your straight-laced boss, or your physician out there, dressed up like a Gladiator?," I asked him.

And I tried to imagine what I would say if I saw mine.

David explained that four downtown hotels are where all of the DragonCon action happens. The Sheraton, the Hilton, the Hyatt Regency, and the Marriott Marquis all happily play host to the event, so after the parade was over, we walked over to one.

And here's when things really got weird.

To say that walking into the lobby of a DragonCon hotel was scary might be going a little far, because there was absolutely nothing to be scared of. But I was beyond overwhelmed. As far as the eye could see there were people dressed in costumes, walking around like it was no big deal.

There was a part of me that was frightened by the horror-themed costumes; I felt a little bit like I was back at the Netherworld Haunted House, and worried that someone might get in my face and try to scare me. But these costumed creatures were jovial and friendly and for the most part, kept to themselves. Except when asked to pose for a picture, which they all happily and often did. 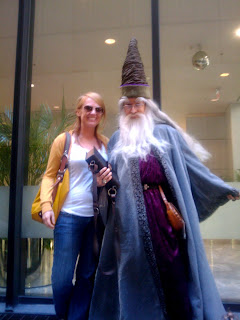 After spending a day there, I know now that I could write a book entitled, Things Overheard at DragonCon, but I burst out laughing when I passed by a guy dressed like Harry Potter tell his friend wearing a cape, "Buy a rocket, the end is near."

The nerdiness of DragonCon was completely living up to its potential. And most participants own it. One woman wearing a "Nerd Convention" t-shirt holding a plastic sword said, "I feel so powerful with this thing!"

The women were absolutely rocking this event, wearing platform shoes and tight outfits posing for pictures with men whose tongues might as well have been dangling out of their mouths. In a world that might not accept their quirkiness and unconventional beauty, they are accepted and appreciated here and it made me smile.

We took a break from the hotel hopping to eat lunch outside, where we could thankfully continue the people watching.

It occurred to us while eating that ESPN's Gameday show was taping downtown for the UNC-LSU game, so in addition to the DragonCon crowd, football fans were starting to fill the streets. For us, it meant we got to see the merging of two very different kinds of people. Seeing the oxford shirt preppy fraternity guys walking down the sidewalk with guys dressed like superheroes was comedy all its own.

All nerd jokes and judgments aside, I had to wonder at what point in our lives to some of us go in one direction and others go in the direction of DragonCon. If instead of taking me to 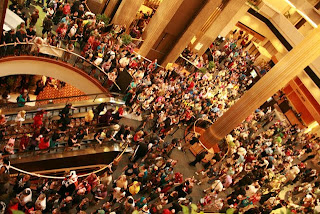 the beach or to South Carolina football games on weekends, my parents brought me to science fiction/fantasy conventions, would I be among these women dressed up like wenches? And at what point does someone cross the line from liking the movie Shrek and wanting to dress up like Shrek to march in a parade? Why do some of us play poker and some play Dungeons and Dragons? When it comes to our interests and our freakiness, is it nature or nurture?

And is there ever a chance that someone can be a member of both teams? I spotted a big guy in an Auburn hat, who I assumed was like David and me, and just around to observe. But when he accidentally bumped into me and said, "Excuse me mi lady," as if he was from another century, I had to then assume that he was one of us and one of them.

David saved the best for last for after lunch. He'd been building it up since he picked me up, telling me about this room he and his brother had accidentally stumbled upon the night before. The basement where the ultimate DragonCon weird goes down and the weirdos come out to play. Literally.

On the way there, there was more people watching, more posing with wizards and superheroes. I overheard a young kid speaking very seriously to another. 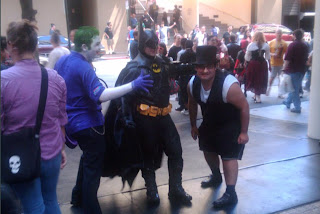 "Well, no, because there are no living people on that planet."

Are these people serious? Who talks about this stuff?

We took an escalator downstairs to the basement where there were rows and rows of long banquet tables and stacks of games on each of them. There were games that I recognized, like Monopoly and Apples to Apples, but they were abandoned. From what I could tell no one was playing with them.

David seemed a little bit disappointed, explaining that the night before the "game room" was filled with people all playing different games. I hope he didn't think that I wasn't absolutely impressed with what I was seeing, because I definitely was. Freaked out, but definitely impressed.

In fact, I had to remind myself to not let my mouth gape open in amazement/shock/horror of the nerdiest people I've ever seen sitting at tables playing Dungeons and Dragons, Risk and a whole slew of other games that I'd never seen before and probably wouldn't understand.

We walked around the perimeter of the room, and then snaked in and out of the tables observing. I planned on smiling at anyone that I made eye contact, but that would've required anyone looking in our direction, which did not happen. The people playing these games were completely oblivious to us. They were so wrapped up in what they were doing, they didn't even notice that I was staring and trying to stifle laughter at what I was seeing. It was as if t 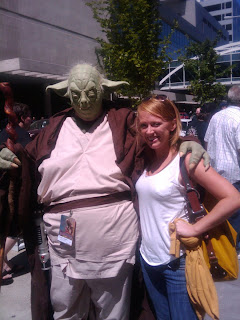 But they weren't acting. They were serious. Very serious, in fact. After an eternity of staring at a large sheet of paper with coordinates and ships on it (almost like Battleship, but not), someone spoke.

"Bring your speed down to 2. And see the major for your next assignment."

My eyes widened and I stared at David, and I couldn't hold my laughter. I quickly walked away from the table and headed towards the escalator, making that last quote the last of my DragonCon experience.

I still have absolutely no idea what DragonCon is for. I can't get anyone to verify if anything other than dressing up and gaming goes down there, so I've had to assume that maybe it's just an opportunity for the freaks of the world to come together to wave their freak flag.

And as someone who has been waving her own freak flag all year, I say, "Wave On, DragonCon!"
Posted by Stephanie Gallman at 10:05 AM

Email ThisBlogThis!Share to TwitterShare to FacebookShare to Pinterest
Labels: David B.