On Day 339, I met Maribeth for dinner at Corner Tavern in Little 5 Points. Our friend David met us as we were finishing dinner to have a few drinks.

The purpose of David joining us was so that he could deliver my items from our glassblowing class. They had to be left at the studio to cool and the instructor advised us to come back and get them in the next week or so. David picked up mine for me, and since I had been out of town the weekend before, I just told him to meet me after dinner. 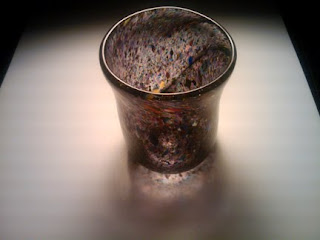 way we could follow through with our plan to make Day 339's thing we've never done before to ask the bartender to serve us drinks in our very own glasses.

The way I saw it all transpiring in my head was that we'd present the glasses, very nonchalantly, as if we were those quirky people who insist on drinking out of their own glasses. I wanted to appear natural, cool, laid back about the entire request.

But of course, I was neither cool or laid back. I instead, unwrapped the glass from the paper it was wrapped in and handed it to the waiter. He knew this was my first time making such a ridiculous request and if he didn't, I think I probably told him, in an obnoxious I'm-trying-to-be-charming way that, "I MADE THE GLASS MYSELF! IN A GLASSBLOWING CLASS! CAN YOU BELIEVE IT?"

The waiter smiled, seemingly willing to comply with my request. He asked me what I wanted to put in the glass, and I fell silent. I hadn't really thought about 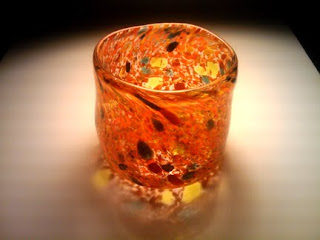 I fumbled for a second and I think he saw my uncertainty as an opportunity to pitch their featured drink of the day, one that incorporated the coffee energy drink "Whynatte Latte."

He said it tastes a lot like an Irish coffee and I didn't ask any more questions. I said, "Sure!" adding another first to Day 339.

He returned with my glass, which miraculously does hold liquids without leaks. I really made a glass! And it's functional! I took a look at the Whynatte concoction, which looked like a latte on ice and then I took a sip. The waiter was right, the drink tasted like a minty Irish coffee.

Good, if I was snuggled up on a couch in front of a fire place in someone's mountain home in December.

Not good if I was playing trivi 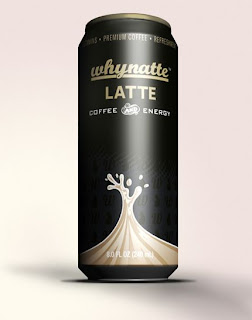 a in a loud bar in Atlanta where temperatures had yet to dip below 90 degrees despite it being September, which is exactly where I was.

The drink turned warm quickly and then it was like drinking super sweet, thick coffee. I don't want to make any sweeping judgments here, but I think there is something wrong with pre-blended coffee drink in a can. And even more wrong when the drink is served with alcohol in a bar.

I had no choice but to finish it because it was in my glass that I intended to take home with me. I should've followed David's lead and simply ordered a liquor drink.

Until trying this terrible concoction, I'd lived my life with a "Why not?" kind of attitude. But now, I have to associate my once-favorite phrase with this horrible excuse for a coffee beverage.

The next time someone asks me, "Whynatte?," I'm afraid I'm going to have to say, "Because it tastes terrible and makes you feel like shit the next day."
Posted by Stephanie Gallman at 10:00 AM

Email ThisBlogThis!Share to TwitterShare to FacebookShare to Pinterest
Labels: David B., Maribeth