Back on Day 305, the thing I'd never done before was supposed to be order and drink a non-alcoholic beer in an effort to relate, in a small way, to a pregnant woman's plight. Only the restaurant Trish and Mark and I went to didn't serve non-alcoholic beers, so I installed their unborn child's car seat instead.
Since (or maybe even before) that failed attempt, my friend Amanda has suggested trying O'Douls as something I've never done before. When a day was winding down and I hadn't done anything that I'd never done before, she offered herself and her apartment for the perfect place to drink a six-pack.
I never took her up on the offer, and truthfully I thought I'd make it to 365 without needing to, because with just weeks to go, activities were lining up left and right.

On Day 346, Amanda and I set out to run the stadium stairs at Grady High School like hard core athletes, but when we arrived at the school, there were only two football players on the field and they said the stadium was closed. 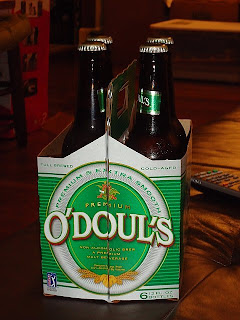 So as a backup, we had no choice but to drink an O'Douls non-alcoholic beer as Day 346's thing I've never done before.

If you've been reading for a while, you likely already know that there is very little rhyme or reason to this blog. I went from attempting to do something very good and very healthy for myself to sitting around Amanda's apartment drinking beers. As long as I hadn't done it, everything was fair game.

After getting turned away at Grady High School, and decided that O'Douls was the way to go, we walked for a little bit to Amanda's neighborhood bodega to pick up our booty. But there was no booty at this market. At least not the kind we were looking for.
Amanda had to start getting ready for work (she had been temporarily moved to an overnight shift), so I drove to Trader Joe's, certain that they would have some tasty non-alcoholic beers we could sip on, maybe even fancier ones than O'Douls. But the only thing I could find was yuppie dorks and fresh from the gym people looking for trendy snack food and cheap wine.

I was starting to take all of these hurdles as a sign that the beer gods didn't want me to try brews without alcohol. Why else would they be making it so difficult?

I finally went to Publix instead, where I was finally successful in locating the O'Douls. I took my purchase to the express checkout lane and threw the six-pack on the conveyor belt, weirdly proud about making this purchase. I considered asking the clerk for a pack of cigarettes, just to raise some eyebrows, but decided against it.

When the sales clerk asked me for my ID, I was elated like I always am when I get carded, but I was also a bit confused. If the beer doesn't have any alcohol in it, then why do I have to be 21-years old to buy it?

I got back to Amanda's and presented the six-pack like we were teenagers and just bought beer with a fake ID.

I told her that the clerk asked me for my license and Amanda agreed that was strange. I think she congratulated me on not looking well above 21-years old. I presented her with a celebratory bottle of non-alcoholic brew and then opened one for mys 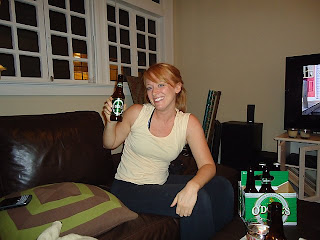 "Cheers," I said, as we clinked bottles. We both took a sip and then looked at each other.

We were having beers while she got ready in her bedroom. It felt like college a little bit, drinking while getting ready to go out. Only we were drinking non-alcoholic beer and she was getting ready for work. Such a strange way to spend a Wednesday.

When Amanda's husband Stephen got home from work, I think he was a little confused to find his wife and I kicked back on the couch drinking O'Douls. If he was trying to read between the lines, his heart might've even stopped.

Amanda texted me from work later that evening, "The O'Douls makes me have to pee," she said.
She was right. O'Douls came with all of the negative side effects (burping, peeing a lot, calories), but there was no buzz. No warm and fuzzy feeling.

So while it tasted fine, I think I'm going to have to pass.

At least not until I'm pregnant and in desperate need for the taste of beer. Otherwise, what's the point?
Posted by Stephanie Gallman at 4:57 PM

Email ThisBlogThis!Share to TwitterShare to FacebookShare to Pinterest
Labels: Amanda, Mark I., Trish