Tackling a project to do 365 things I've never done before could not have happened had it not been for the eager support of my friends and family, rooting me on from the start and willing to be a part of challenges.

If you've been reading this blog from the start, you likely know the names of some of these 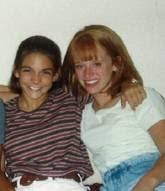 supporters. Their names appear to the right of the screen, in that huge long list of awesomeness where I've "tagged" them each time they participate in my blog, and in my life. The more times they participate, the larger their name gets. But don't be fooled into thinking that only those on that list have participated in this experience. There are plenty more, whose names are smaller or nonexistent, who have cheered me on from afar, commenting on my progress and leaving me messages of encouragement when an entry has touched them. Tagged or not, without my team, my pit crew, there is no way this project would have ever gotten off the ground or sustained 352 days.

One of my friends, who had yet to appear in the blog until this day, is my hometown friend Kelly.

I have known Kelly since middle school. We met in 7th grade at the height of our awkwardness. We spent summers swimming in her pool, going to the mall, and obsessing about boys, and have been friends ever since.

When we were in college, Kelly moved to San Diego to live with her sister. She was only su 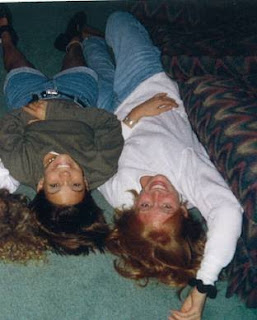 pposed to stay for the summer, but after meeting a wonderful guy and falling in love, she decided to stay. Years later, she and the wonderful guy got married and now they have two gorgeous kids. It's taken years, but I think I've finally accepted that Kelly's probably not moving back to the east coast. Knowing that I will always have a friend in Newport Beach, California with a free place to stay makes that pain hurt a little less.

With two young kids and a busy life in California, flying to Georgia to go sky-diving or polar bear plunging with me for the blog was obviously not in the cards for Kelly, but she is definitely one of my supporters from afar. There was something that I'd wanted to try for the blog, though, and I thought she might be able to help, so I emailed her ahead of Day 352.

"Are you kidding?" she said. "Yes! We Skype all the time!" Kelly's sister has since moved back to the east coast and that's where her parents live too, so web chatting through this service is something that they do often.

We made plans to make Day 352's thing I've never done before to catch up with each other via Skype.

Ahead of my Skype date with Kelly, I talked to others who were frequent Skype users. Some of 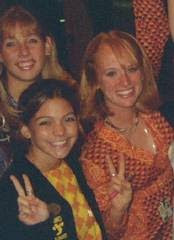 my co-workers with long-distance boyfriends were big fans of the service, as were those who lived far away from their families. My friend Jackie said Skype has been great for her son because while he's not much for talking on the phone, when he can look at the screen and see the person he's talking to, he's much more likely to become engaged in the conversation. In fact, at one time her son thought her parents (his grandparents) actually lived in their "'puter" (computer).

I looked forward to seeing Kelly's face (and her kids' faces) and for us having a real conversation that included body language and visual responses. There is only so much that a phone call can do.

Everyone that I talked to said Skype is extremely user-friendly, but it would be like me to somehow screw it up or not be able to figure it out. So I asked a ton of questions before logging onto my boss' computer, where he had a webcam installed for Skype. I created an account and then found Kelly's username that she had given me ahead of our date. I clicked on her name, and within seconds, a screen popped up and I could see her! Clearly I'm behind the times when it comes to technology, evident by my television and my cell phone, but I honestly could not believe how easy this was.

I gasped like I was seeing her for the first time in my life.

"KELLY! HIIIIIIIIIIII!" I shouted at the screen. Everyone sitting around me turned and looked annoyed. I apologized for my overzealousness and tried to play it cool. And then I laughed at myself, as I imagined that how I was acting was exactly how my technologically disadvantaged father might act if he was using Skype for the first time. 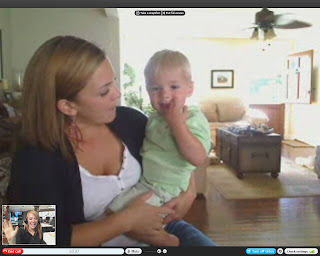 Again, I was shouting at the computer.

I started spastically clicking on audio buttons and furiously looking for a microphone hook ups, anything to fix the problem so that she could hear me. I knew my friend Katy uses Skype for her job, so I rushed over to her desk to see if she could help."

Do you have a Skype headset?," she asked me.

She explained that a lot of personal computers have microphones built in, so an external mic isn't necessary, but since we're in a public workspace, a headset with both earphones and a microphone is necessary. I didn't have one. She didn’t either.

Noooooooooooo. My Skype date was about to go up in flames.

Kelly was patiently waiting in front of her computer when I ran back to my desk. Skype has an application that also allows you to Instant Message the person you're talking to, presumably in situations like this. I explained to her what was going on and told her I was in search of a headset and would be right back. She laughed and said, "Ok."

After pleading with several people, my friend Jason finally came to the rescue with a Skype headset. It made me look like a telephone operator, but I didn't care. I plugged it in, and finally I could hear Kelly and she could hear me. 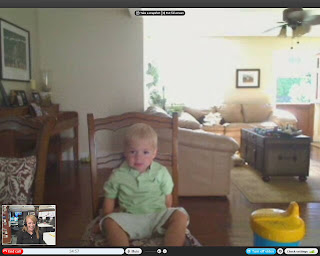 Crisis was averted, and our Skype conversation could commence.

Unfortunately for Kelly, our Skype conversation, at least for the first ten minutes, became a conversation about Skype. I was so enthralled with this technology and the fact that it costs nothing; I could hardly concentrate on the conversation. I was "that girl" who said probably a dozen times, "I can't believe I'm looking at you right now! And you're in California!"

When I finally calmed down long enough about Skype to actually talk to her, we had so much fun catching up. There is a little bit of a delay, which can be frustrating but also humorous. I could hear her laugh sometimes before I could see her react to what I was saying. And because I was looking at her on the screen and not directly into the camera, we never really looked each other in the eye.

I didn't think about it while we were talking, but later I was absolutely hysterical thinking about the first time I ever logged onto the Internet with Kelly and our other friends Lisa and Cindy. We were at my parents' house on their old computer with one of those free trials from AOL. We stayed up for hours online chatting with God knows who, pretending like we were in college and making up fake names for ourselves. 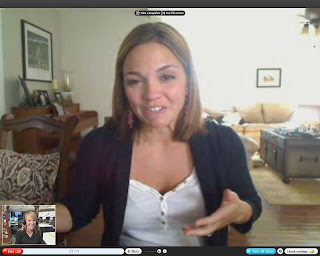 Fifteen years later, there we were, on the computer again, only this time talking about our real lives, not ones we made up. Still hysterically laughing, though.

I felt like I got a glimpse into her life, and she got to see a little of mine too. I was at work, but I wasn't technically working when we spoke, but still there were phones ringing and co-workers stopping by my desk to talk to me. Kelly's kids were waking up from a nap and were running around in the background, demanding to be let out where their dad was. She managed to get them to say hello, but they are active little boys with an agenda of their own. And they even cuter live than they are on their Christmas card. I was soaking it up.

There is absolutely no way that Skype could ever replace the comforting feeling that comes with being the presence of good friends. I so wish that Kelly and I lived closer and saw each other more than once or twice a year. There's nothing quite like giving her a hug, seeing her face in person, and hearing her laugh without a delay. But to have the option of speaking to her face-to-face and see her crazy kids bouncing through her house, all for free, through the wonders of the Internet? Well, that's technology that I can get behind.

Skype, you are amazing. As long as, of course, I remember a headset.
Posted by Stephanie Gallman at 5:30 PM