Day 351 was several weeks in the making. In fact, several friends of mine and I had started talking about taking an art class back at the wine party I threw on Day 297. 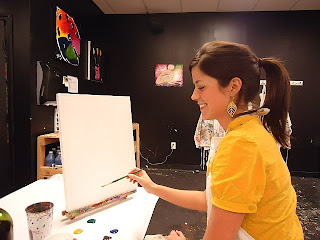 Sips N Strokes is just one of many "art for amateurs" studios popping up around Atlanta and all over the country tailored for non-artists who want to learn how to paint. The teachers at the studios will actually teach their students step by step how to paint their very own masterpiece, and the studios encourage students to bring their own wine or snacks and make a party out of the experience. The friends that I knew who had been before all had a great time and all created something worthy of hanging in their homes.

A Sips N Strokes outing sounded like a fun thing to do, and several of the wine party participants were interested. But thanks to busy schedules and lives, when it came down to it, Emily was the only person who could actually commit. She and I perused the studio's website that allows you to see what painting will be taught on each particular day. There was a lot of emailing back and forth, a lot of discussion (Do I really want a UGA Football themed painting in my house?), and a lot of us almost deciding on a painting only to have it sell out before we could put down our deposit.

Finally, we came together and decided to the embrace the country side of our usually rock 'n roll personalities and paint a picture of cowboy boots as Day 351's thing I've never done before 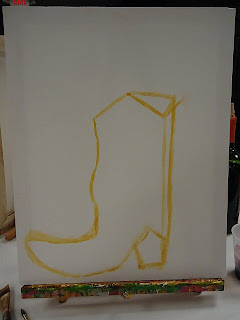 When I arrived at the class, I couldn't believe how many other people were there, interested in painting cowboy boots on a Monday night. The tables, all set up with easels and white canvases, were packed.

I purchased a magnum bottle of red wine for Emily and I to "sip" on while we were there (I don't know why I thought we'd ever drink that much), but I proved my amateur painting and drinking status because I forgot cups to drink from. I was like an unprepared student on her first day of class without paper or a pencil and I embarrassingly had to go to the head of the classroom and ask if they had an extras. Luckily, they did.

Only when I returned with cups (phew!) was I was able to properly get set up and ready to paint. Emily poured the wine, while I put on the apron they had provided. There was a young, spunky redheaded woman walking around instructing us on which colors we would need for this painting. I joined the other students at a station set up with huge jugs of paint with what was the equivalent of a piece of white cardboard and collected the colors and returned to my seat. I felt like I was back at Harbison West Elementary School art class.

When it was time to actually get started, the young, spunky lady slipped fastened a microphone around her head a la Britney Spears. She told us her name was Molly as she climbed up on an elevated platform to stand in front of her very own white canvas. There were a few other welcoming pleasantries and then she went right into teaching us how to paint cowboy boots.

At first, her instruction was extremely straight-forward. She told us to dip our medium-sized brush into a little yellow paint mixed with white and to draw a straight line down almost in the middle of the canvas. From there, still with the yellow paint, she gave more specific instructions that included drawing more lines next to each other and an upside down triangle at the base of one of the lines. I trusted the p 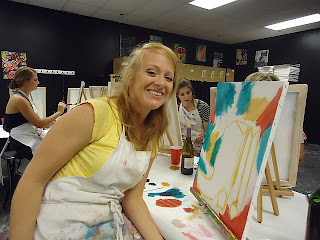 rocess, but I had absolutely no idea where she was going with this. My lines and upside down triangles looked more or less like everyone else's around me, though, so I felt like I was on the right track.

And then Molly went off the map, abandoning step-by-step instructions for the more abstract. She said, "Now from the lines you've already drawn, just draw the body of the boot."

"Just draw the body of the boot?" Just like that? Just do it? How, Molly? How?

I don't know how to just do that. That's why I'm here, Molly. Because that would take artistic ability, something that I lack. I'm going to need you to tell me exactly how to pull that off. I looked around and saw that everyone else was just doing what Molly was doing, and with serious reservations, I went for it.

The result was the most insane yellow boot I've ever seen. The leg of the boot was so big, it looked like someone with elephantitis owned these boots. And the toe pointed upward like an elf shoe. I took a step back and tilted my head to the side. The boots still looked awful, so I took a sip of wine. Clearly this painting was going to be a disaster, I thought, might as well drink! 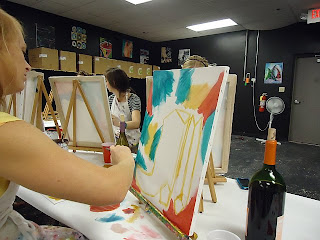 The whole, "now just paint the boot," merely kicked off a succession of instructions from Molly that were hardly helpful or really instructional at all. And I had to consider that maybe painting can't really be taught. At some point, true talent has to step in. That's what separates the Van Goughs and the Picassos from everyone else. Or, in this case, what seemed to separate every single other person in the class from me.

Molly went rogue, slapping blue, yellow, and pink paint in the white space surrounding her boots, encouraging us to do the same. I tried to follow her lead, or literally copy what everyone else around me was doing, but my color blocks looked crazy, and not at all like the picture on the website.

After slapping paint on her canvas and somehow making it look great, she turned around and told us we'd need to clean off our medium sized brush and dip it into the black paint.

"Now it's getting real," she said, smiling. I paused, pleasantly surprised and half-expecting for her to tell me that everything that we had done up until now was practice. Then she'd deliver new canvases and 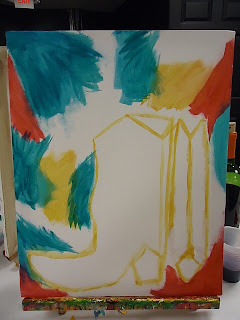 we'd all get to start over.

I'm sure I don't need to tell you that's not what happened. She kept talking.

"This is serious," she said.

Indeed she was serious about the black, and when she said it was getting real she meant that once the black paint goes on the canvas, there is little a painter can do to fix it. All of my terrible yellow lines and ill-shaped boot could be tweaked with darker colors or covered up all together. But once black gets slapped on there, it's a whole new ball game. A serious one, according to Molly.

I did as I was told, looked at Emily and started to go for it, but then I stopped. I waited for her to go first, like she could show me the way. I hoped that the black paint could help me shape my boot to not look so crazy.

Once the boots were traced in black, Molly came down from her platform and began walking around the classroom to check out how everyone's pictures were coming along. She was still mic'ed, so we could all hear her as she responded with constructive criticism or words of praise. Occasionally she'd shout instruction as vague and confusing to me as, "Just draw the boot." 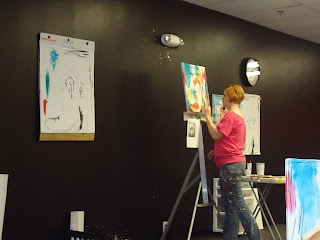 "Now add an emblem to your boot if you want."

"Shade the back of the boot with black so it looks like it's casting a shadow."

"Blend the blocked colors so that they're not so separate from one another, like they all run together."

When she responded positively to someone's work, we all turned to look at what picture warranted such remarks. I should've known by the elaborate wine and cheese spreads laid out by some of the other students that there were definitely some in the class who had been to Sips N Strokes before. But to turn around and see what could only be the work of professional artists, I couldn't help but be annoyed. Not only were the paintings good, these painters were so good that some of them had taken the creative license to make their cowboy boots depict the Impressionist or Cubist art movements.

I had flashbacks to the adult g 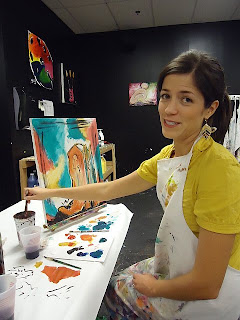 uy with braces who tried to one-up everyone in cooking class. Pretending he really wanted to know how to cook Thai food and then dropping Thai cooking knowledge on everyone for hours. These people didn't sign up for this class to learn how to paint. They came to show off!

When Molly came to our table, she looked at mine and tilted her head to the side, clearly disapproving of what she was seeing. She pointed to an area that I had left unpainted and then looked at me.

"Were you meaning to leave that part white?"

I certainly wasn't meaning to do anything really. At that point, I was just putting paint on the canvas and hoping for the best. She was hardly the warm and fuzzy art teacher that I remembered from elementary school and she made me nervous.

I looked at Emily with pleading eyes. I didn't think it looked that bad with the white, 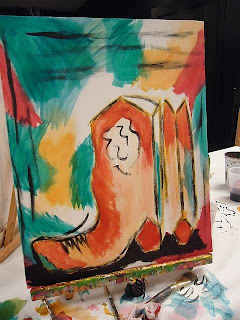 but before I could defend my decision, Molly turned her attention to Emily's painting. I could tell she liked what she was seeing. She picked up it up, much to Emily's surprise and mine, and held it up for the entire class to see.

"See how she added the black accents?" The class smiled and nodded. Emily is a teacher herself, so while it was nice to be praised in front of the class, I could tell she was a bit uncomfortable being on this side of the attention. In an instant, Emily went from teacher to teacher's pet.

By the time Molly was done walking around the classroom, we'd all more or less finished our paintings and were free to go whenever we wanted. Emily and I stayed, mindlessly adding accent lines and filling in gaps, pretty sure that nothing we were doing was going to make much of a difference on how our pictures looked. I had also become engaged with the conversation happening across from me. A handful of girls, probably five years younger than me were discussing some serious drama between a guy one of them was dating and some other skank from Auburn and I had to hear how it all played out. Plus they were having a party that weekend and desperately trying to decide on whether or not Jell-O shots were necessary, or just a pain to deal with. I almost spoke up, saying Jell-O shots are almost always a good idea, and then asking if I could come to a party. 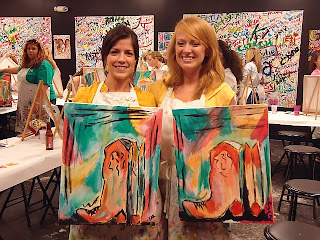 I found myself aching to be a better painter, and to be five years younger, and then perfectly happy with just being me, almost 30 and a painting amateur.

Sips N Strokes does not an artist make, but I did prove that I'm excellent at following directions and hanging out with my friends, drinking wine always makes for a good time. Like Molly said at the beginning of the class when faced with a room full of skeptics, the painting did come together in a way that I never thought possible. Not in a way that it merits hanging on my wall anytime soon, or ever, but certainly worthy of wrapping up and giving to a family member for an awkward Christmas present.

Or, perhaps worthy of a sale on eBay. I wonder if that bitch Connie likes cowboy boots?
Posted by Stephanie Gallman at 6:00 PM

Email ThisBlogThis!Share to TwitterShare to FacebookShare to Pinterest
Labels: Emily