On Day 341, a group of work friends decided to blow off some steam over a couple of beers at the Bookhouse Pub. 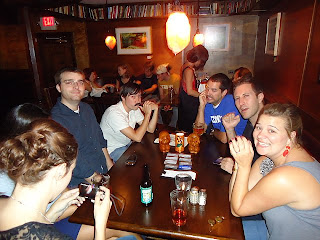 I begged Amanda and her husband Stephen to come because I was not motivated to think of anything to do that I'd never done before and I knew she'd come up with something that would be highly entertaining to write and read about.

I think Amanda was upset that I'd yet to actually go out with anyone that I'd met online at Plenty of Fish.com, because she was using this "blog-fan's choice," as an opportunity to force me out of my dating shell. Her goal from the start was to find someone that I could buy a drink for or give my number to or use a cheesy pickup line on.

But my experience with meeting cool guys worthy of such tactics is that those kinds of meetings rarely happens when I (or in this case, Amanda), is looking for it. I usually encounter interesting, attractive people that I'd like to get to know better when I haven't showered, my hair is slicked back into a ponytail and my shirt has holes in it. I was coming to this bar from work, looking relatively presentable, so I knew my chances of meeting anyone worthwhile were slim to none. 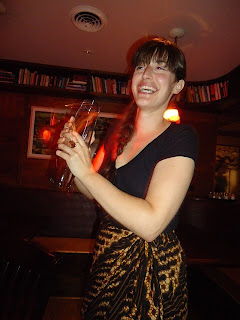 And sure enough, I was right.

I would've done any of those things Amanda was suggesting, but but neither of us could really find anyone worthy of sending a drink or giving my number to. Despite her persistence with a guy that looked like former CNN television anchor Rick Sanchez, we abandoned this mission and moved on to something else. (Later I saw that he had a wedding ring on, so it obviously wasn't meant to be.)

What else can be achieved in a bar that I hadn't done before? In my almost-30 years had I done all of the inappropriate, regret-the-next day bar activities? Certainly not.

The night was starting to wind down and there were friends at my table ready to pay their checks.

"I still haven't played credit card roulette," I said out loud to the table to no one specific.

Credit card roulette involves handing the waitress a group of credit cards to choose from. Whatever card she chooses has to pay the whole tab. If I was going to make this Day 341's "thing," the rest of the group had to be on board and willing to play.

Luckily, I'd suggested we play on payday, so all of our checking accounts were in good shape for this kind of game. Timing, I continue to realize, is everything. With everyone then feeling 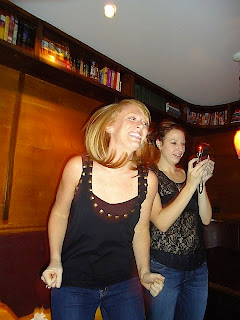 generous (and perhaps a little tipsy), they said, "Sure!" Day 341's thing I've never done before was to play credit card roulette.

If you play the odds, which I don't because I'm not entirely sure I know what that means, then credit card roulette is really a safe bet. With eight cards in the pile, I had only a one in eight chance that my card would be chosen. Even when we decided to choose two cards to split the check (the bill was significantly higher thanks to some fancy, expensive tiki drinks, commemorative glasses included), the odds were still in my favor.

That's the thing about credit card roulette: if your card is the one chosen, you must pay for everyone's purchases, regardless of how ridiculous they seem (Tiki glasses? In a beer bar?).

By splitting the check between two people, the odds moved to one in four. There was a 75 percent chance that I would not have to pay for my (or anyone else's) drinks. I like those odds.

But with any gamble, there is always a chance you could lose. Or win. Here's something I'm still not clear on--if my card got pul 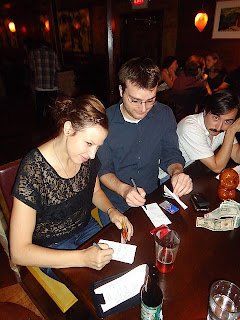 led and I had to pay, does that mean I "won" credit card roulette, or did I "lose?" Being chosen makes it feel like I'm a winner, but paying for everyone makes me feel like a loser.

Everyone laid their cards face down on the table. When the waitress returned, we explained to her what we were doing and she returned with the bill and two pint glasses. She gathered the cards and put them in one of the glasses, turned the other glass upside down to cover them and then shook wildly, mixing up the cards.

She reached her hand into the glass and pulled her first card.

"Devon Sayers," she said, unsure of how to pronounce his last name.

The whole table, except for Devon, erupted into thunderous applause and shouting. 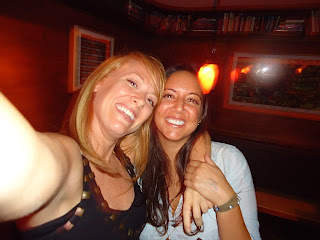 She covered the remaining seven cards with the glass and shook again, drawing another card from the pile.

Again, more applause and shouting, at least from the six of us whose cards weren't picked.

Carolyn and Devon took their loss (or win) in stride, and happily posed for pictures while signing their checks. I posed for a picture with Katy, happy that my beers were paid for and my checking account remained untouched for another night.

I'm not quite sure how I would've felt if it was me who had to pay, but from where I was sitting, credit card roulette is a great game.

Losing never felt so good.
Posted by Stephanie Gallman at 10:40 AM