Day 349: Not that Kind of Transfusion

Elizabeth and Kristof were in town from San Francisco, and on Day 349, we all met at Kyle and Greg's house to watch the South Carolina/Georgia game. Friends dropped in and out with their kids and their dogs throughout the day and we flipped back and forth between baseball and football games. It was a daytime get together that lasted well into the night.

I was sure that at some point, after all the games were over and we needed a change of scenery, that we'd head out to the bars. 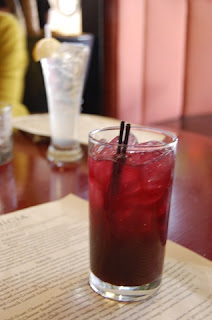 But no one was really interested in doing that. And I couldn't help but think that in addition to having conversations about life insurance, getting older also meant that we'd traded bar-hopping for staying in and playing games.

But having game night was not Day 349's thing I've never done before. Pretending to be Charlie Chaplin and humming the words to "Here comes the Sun," by the Beatles and having Momo understand it during a riveting and competitive game of Cranium, well, I'd never done either of those things either but what I'm not counting them.

Day 349's thing I've never done before was to try a new drink called a "Transfusion." Andrew told us about them and how good they were and when he saw that we were interested, he wasted no time in going to the store to buy the ingredients to make them. The drink includes vodka and grape juice, half a cup of ginger ale and a lime wedge. I assume they are called, "Transfusions," because their color makes them look like blood, but I didn't care. After drinking beer all day, the cocktail was a sweet and refreshing change.

As Andrew said, "These are money." Indeed they are.
Posted by Stephanie Gallman at 9:00 AM