One of the many reasons (along with my friends, my job, and the weather) that I am so positive about living in Atlanta is because I live close to my office, so I rarely suffer through the intolerable traffic that the city is known for. Door to door, I live a mere 4.4 miles from work and I get to drive through quaint neighborhoods to get there, avoiding the interstate altogether. My company offers free parking across the street from my office, so I drive to work every single day. 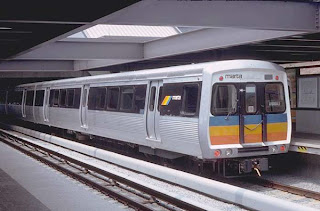 On Day 338 I vowed to change my mode of transportation to work, by weighing three options: take MARTA (Atlanta's transit system), ride my bike, or walk.

I'd looked into taking MARTA to work many times. I like living green, I like riding (good head-clearing, read a book time) and I love not spending money on gas.

But when I researched routes, I quickly realized that while possible, taking MARTA from where I live is counter intuitive; the closest MARTA station isn't within walking distance to my house, and riding a bus to get there would take an hour to do what takes me, at most, 15 minutes to do in my car. I'm not against it, but it just seemed like a colossal waste of time. And driving away from the direction I am headed just to ride the train is simply ridiculous.

Riding my bike to work was another option, but I'm not at all confident about my bike-riding skills, especially on the busy downtown streets. I'm willing to look like an idiot for 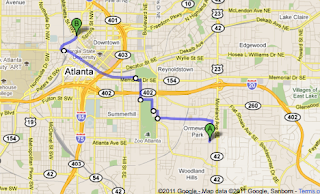 the blog, but since escaping death on Day 195 , I promised I'd do less daredevil-ish challenges. I was so close to hitting the 30-year milestone. To risk ending it all while merely trying to pedal to work just seemed like a mistake.

So straight off enjoying some of the food that Atlanta is famous for at the Varsity, the time had come to tackle another Atlanta-based challenge. A blog activity I'd thought about since I started Project 29 to 30. On Day 338 I took to the streets and walked to work as the thing I've never done before.

To those of you big city dwellers, this probably doesn't sound very impressive. But for me, this was a big deal because Atlanta is not a "walking city." At least that's what people tell me, and almost everyone has a different opinion as to why. 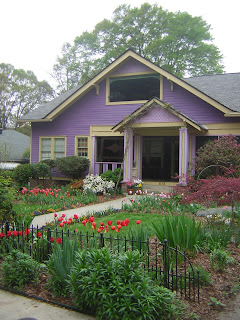 up way too fast!"

"Everything is so spread out."

Regardless of the reasons why, most of the people I know drive to get where they are going. Neighborhoods are spread out and having a vehicle is almost necessary to get anywhere. I know but a few people who have chosen to live here without wheels and most of them eventually folded and eventually bought a car. It's not ideal; in fact it is one of my least favorite things about Atlanta, but it's reality.

On Day 338, though, I was on a mission to walk my non-walking city. And with a little preparation, I knew I could make it happen. I had a convenient work schedule on my side (I didn't have to be at work until 11am, so I wouldn't have to walk in the dark), the weather was hot (but not raining), and I am a member of the gym at my office, so I could shower and change my clothes before heading to work.

I woke and packed the items that I would need for the walk. An outfit, shoes, toiletries, my wallet, and my Blackberry were all I really had room for in my Jansport (circa 1999) backpack. I dressed in workout clothes, laced up my sneakers, strapped on my iPod and took off for work. 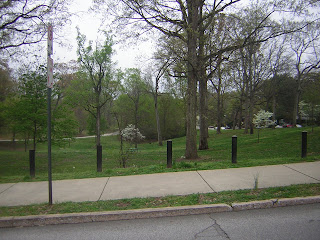 I'm not sure why (all I was doing was walking), but this challenge made me a little nervous. A ridiculous emotion, considering I knew the terrain. Half of the journey to my office was on a route that I run two or three times a week anyway.

Plus, the walk was nice. Relaxing, really. By not driving, I had time to be alone with my thoughts, without the distractions of the radio or traffic. I confess I reached for my Blackberry several times and caught up on work emails, which sort of killed the mind-clearing aspect of the journey, but I eventually forced myself to put it away and just walk. I even made it a point to stop and smell the roses (literally) and even enjoyed the company of a butterfly for one leg of the journey. I discovered about 10 houses that I wanted to buy and confirmed that my yard is significantly more awesome than every other yard in my neighborhood.

The looks I got from neighbors and passersby were sometimes comical; the workout attire I was wearing said, "Girl on morning exercise 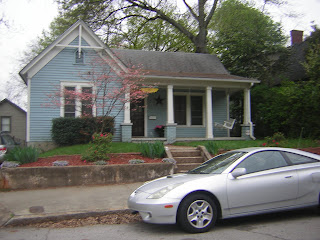 trip," the book bag screamed, "Student on her way to class." But as much as I'd like to believe that I still do, my days of looking like a college student have long since passed, so I'm sure the look was overall quite confusing.

At the edge of Grant Park, I passed my friend Mark's old house, took a picture of it and emailed it to him in New York.

"Hello from Atlanta! Your house is doing well, just like you left it," I wrote. He loved it.

I stopped for coffee at Ria's Bluebird, a diner on the edge of Grant Park. While waiting for my drink, I caught a glimpse of a man who looked like he could be my friend Trey's dad.

I texted our other friend Philip to tell him. Within a few minutes, Philip called me back.

"I think I just saw a guy that looks exactly like Trey's dad," I yelled into the phone as a car whizzed by.

But I don't care. This was a great idea; one that I questioned only once when I had to cross over Interstate 75/85. The sidewalk was wide and I was not at all in danger, but there were some sketchy construction workers who were a little "mouthy," and it killed the relaxation for a bit. Plus the smell of fumes coming from the highway could've done some permanent lung damage.

Once I made it across, I really started to think about Atlanta and its "non- 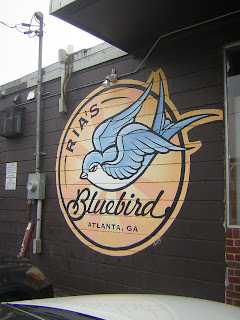 walking city" status. I live in a neighborhood outside of downtown, and I never had to venture from a sidewalk. I don't think I'm on a plight to single handedly make Atlanta a walking city, but when my work schedule allows for it, I'd definitely like to do this again. And since, I've considered all of the other places I used to drive to that I could walk to instead and I've done it.

I arrived at work (an hour and twenty minutes later) both relaxed and energized. Sweaty, and in need of a shower, but feeling great. I had already exercised for the day and had already done my blog activity. I'm sure there were a lot of factors in play there, but I credit the walk for making Day 338 a really good day.

When it was time to go home, however, my co-worker Alta was none too pleased that I was attempted to brave the tough Atlanta streets on my own. I was fighting daylight, so the walk home was much faster than the morning. I think I might've even jogged a few times. And while I encountered a few crazies, I definitely hit more on my way there in the morning than I did on the way home.

Who said Atlanta isn't a walking city? I walked it out.
Posted by Stephanie Gallman at 10:10 AM