Day 56: Roundhouse Kick to Your Face


Justin, fellow Wooter and colleague, is also a skilled martial artist. He said I needed to try kickboxing for the blog.

"Are you saying I need to work out?" I asked him.

He looked dumbfounded, like I backed him into a corner. 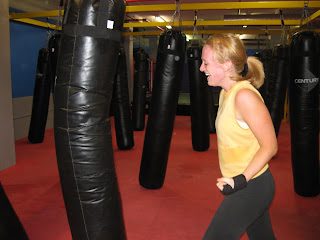 Our other friend and co-worker Jackie was also interested, so Day 56's thing I've never done before was take an MMA kickboxing class.
On the drive over to the studio, I thought about how cool it was that Jackie was participating in this blog experience. Jackie has been on a fierce workout regimen for months now, determined to get down to her pre-baby weight. Her dedication inspires me to work out. On the other hand, Jackie is the reason that I need to work out as much as I do. She is an excellent baker who sabotages everyone's diets with her culinary excellence at least once a week. So if I was dragging myself out of bed on a cold, wet Sunday morning, then it's only appropriate that Jackie should be there too.
Jackie, Justin and I arrived at the studio and just as Justin had instructed us to, Jackie and I faked like we wanted to join the gym so we could take the class for free. While giving us a quick overview of the facility, the saleswoman wrapped our hands for the class like we were real deal boxers. She asked me what kind of working out I did. I told her I was a runner, I used to be a dancer and I like yoga every once in a while. She nodded her head enthusiastically in approval of my exercise choices. She also said I'd probably really enjoy the class and have no problem getting the hang of it. 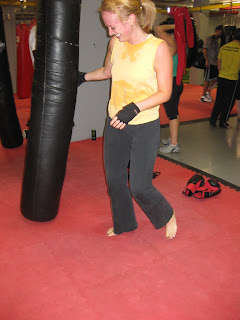 I've had my ass kicked in enough exercise classes to know that regardless of how many miles I've run, dance classes I've taught or yoga classes I've taken, this was not going to be easy, regardless of what she had to say. No cockiness or sureness coming from me. I was scared to death.
Our instructor was a short guy, and five minutes into the warmup I diagnosed him with a Napoleon complex. He was nice, and helpful, but also relentless. He told us at the beginning of class that he was a pissed-off Georgia fan ready to take out his frustrations about the Kentucky loss out on us.

There wasn't any easing into the workout. The instructor, who I'll just call Napoleon, went after it, barking at us to do jumping jacks, then run in place, then more jumping jacks, then mountain climbers. I was sure Napoleon bet money on the Georgia game. He was really mad. Jackie and I looked at each other with desparation. And then we glared at Justin.

Not to mention, my pants were falling down. For a brief, ridiculous moment I thought perhaps the kickboxing was really working and I'd already dropped a pant size! But I'm pretty sure this was not the case, and the pants falling down was due to the fact that I was I jumping up and down like a monkey and crawling around on the floor like a dog. This was still during the warm-up. The no-more-than 10 minute warm-up.
Jackie and I had a clear view of the clock on the wall, so we knew from the minute the class started how much longer we had until it was over.
Jackie said this helps her sometimes. She says she thinks its the notion that regardless of how difficult something is, she only has to endure it for 15 minutes. It's just 15 minutes!
I always get screwed by the clock, because I will convince myself that I've been running on the treadmill for at least 30 minutes. At least! And I'll look down and I've been running for 10. The clock is never on my side. This was no different. 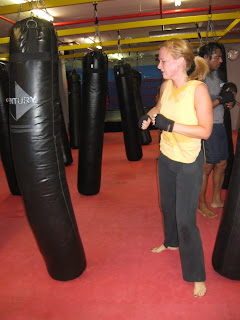 Following the warm up, the instructor walked around the class and shouted kickboxing instructions to us. No surprise, there were a lot of punches and some kicks. What a great stress reliever. Just picture your worst enemy as the punching bag and go to town. Jab, cross, upper cut, roundhouse kick in your face!
Kickboxing, at least this teacher's version of it, is as much of a mental workout as it is a physical one. It's hard! I reached a point in the class where I wasn't even sure what Napoleon was saying. My legs were just sort of galloping like a horse and my arms were like spaghetti noodles flying around. I made sure I kept moving, though, because I had a feeling he was the kind of teacher who liked to call people out, by name.
I miraculously finished the class. I may have been worthless and sore for the rest of the day, but I still finished. And I convinced myself that a few more of these classes and less time on the treadmill might be just the shock that my body needs to actually lose a pants size for real.

Day 56 was the day that I tried MMA kickboxing with my co-workers. It is also the day that I learned to toss vanity aside, because as you can see by these hideous pictures of myself, I am a disgusting sweaty mess. Don't be fooled by the pleasant look on my face, I'm only smiling in hopes that you'll look at my face instead of my body in workout gear. I'm also happy that the class is over. So there are the pictures...the good...the bad...and the very ugly.

I pity the fool who makes fun of them!
Posted by Stephanie Gallman at 10:55 PM