A few days after I started the blog, my friend Dani sent me an email saying she had an idea for something I could do.

"Bingo," the email read, "I've done it three times. It's the best entertainment." 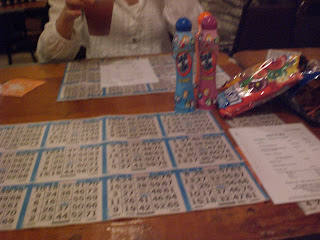 She went on to say that the average age of the participants is 80, but there is an opportunity to win money. Some winners take home between $50 and $75 per game and the final jackpot, depending on how many people show up, is between $700-$1000.

Entertainment, a blog entry, and the possibility of winning cash? Sign me up.

It took us several weeks to get it together, but Day 47's thing I've never done before was play Bingo with the Knights of Columbus.

Part of the reason why the evening took some effort for me is because Bingo starts at 7:30pm and I usually don't get off work until 9pm. So in order to go, I had to ask a generous colleague if he would switch schedules with me so that I could leave early. He agreed.

That's right, I rearranged my schedule on a Thursday night, not so I could go out on a hot date, or because I scored tickets to some great concert. No, I got out of work early and raced to the Knights of Columbus hall for Bingo night. 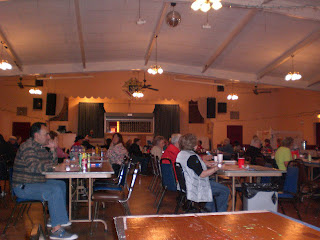 For those of you who don't know, and I didn't, the Knights of Columbus is a Catholic fraternal benefit society founded on the principles of charity, unity and fraternity. Which is a lot of words to say it's an adult fraternity for Catholic men.

I barrelled into the parking lot right at 7:30pm freaking because I was late and I was scared I was going to miss the first game or worse, that they wouldn't let me in at all. Bingo was already causing a lot of drama for me, which is sad and quite telling of my increasingly lame social life. Luckily when I arrived, my friends Lisa and Dani, along with some others well over the age of 60, were still in line purchasing their cards. I burst out laughing when I saw them, partly because I was nervous and relieved that I made it, and partly because my friend Lisa was standing there in her designer jeans and Ugg boots, sipping on a Bloody Mary clutching Bingo cards. We were really doing this. 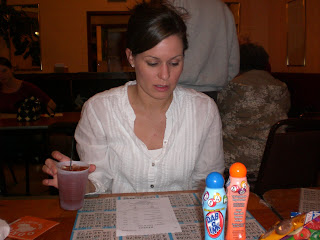 Dani helped us pick out what supplies we would need to best execute Bingo night. That meant cards and a stamper. Gone were the days of my Bingo youth, where pennies or beans marked the squares. I quickly learned that this isn't your elementary school Bingo. This was serious Bingo and serious Bingo requires an ink stamper. Dani already had a stamper for herself and an extra one for Lisa, a fact that is worth delving into at another time. I bought a blue stamper for myself for $1.

We took our seats with all of our cards and I scanned the room to take it all in. The room reminded me of an old church fellowship hall or gymnasium. Everything seemed yellow, old, and I don't just mean the people. There was a light up Bingo board up at the front and a podium with a microphone. The rest of the room, which was pretty big, was full of cafeteria style tables and folding chairs. I'd like to tell you how many people were there, but I have no gauge on that (I once told someone that there were 500 people at a wedding that I attended and there were 200). It seemed like 60 people to me, so that means there could've been anywhere between 15 and 200 people there.

While I was perusing the competition, Dani starting pulling bags of snacks like Munchies and Lifesavers out of her purse. I gave her a look that said, "What the hell are you doing?"

Sure enough, she was right. At all of the cafeteria tables were players, and their cards, and their snacks. We fit right in. What kind of strenuous Bingo was this, I wondered, that constant nourishment was necessary?

Besides the three of us and another young couple, there was one other guy that fell way below 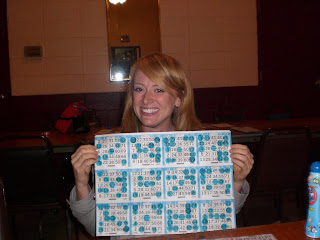 the average aged person. He looked like the guy that had a recurring role on Grey's Anatomy whose name escaped me until I just looked it up: Jeffrey Dean Morgan. He was cruising around in a t-shirt and warm up pants and it was obvious by the fact that he was moving chairs and assisting players, that he was a member of the fraternity. He likely wasn't expecting to to see three young, attractive girls show up at Bingo night, or he probably would have dressed up a little. He liked us and gave us a hard time pretty much all night, so we considered him our friend.

I asked Lisa about her Bloody Mary and she remarked that the hall had a full bar with cheap drinks. "Two dollar Bloody Marys, Steph," she said. "Where else in Atlanta can you get that?" I can't think of anywhere, Lisa, so drink up. But the accordion style doors separating the bar from the big room had already been shut, blocking it from view. There was no time for drinking. It was time to focus.

There's an all-call before the games begin, where the "caller" (not sure if that's what they are named, but the 100-year old guy that calls out the squares) chooses one square as a "free space" in addition to the already free space in the center. Ours was B-4. So I went ahead and stamped all of the B-4's on all of my cards. Not because I thought that was a good strategy or because I thought it would help me, I just saw Dani do it. Seeing as how she already owned two stampers and brought snacks, I figured she knew what she was doing.

The last time I played Bingo I remember only having one card and the way to win was to get five squares in a row, horizontal, vertical or diagonal.

Again, this is not your average Bingo. First of all, we had sheets with 16 cards on them, so it's a lesson in detail because there is a lot of squares to pay attention to. Knights of Columbus Bingo has several rounds and each round requires a different combination to win. One round you had to have two rows on the same card, one you had to get four squares in one of the corners, and one you had to black out the entire card. They even had "caller's choice" and he picked a round of nine squares to win.

The most stressful part of the evening came during the speed round, where the caller calls squares quickly, barely pausing before he announces the next one. Intense.

There is an intermission where they open up the bar and everyone grabs drinks and takes smoke breaks. We bellied up to the bar during intermission and grabbed a beer as well as the attention of several of the regular male players, who were quite impressed by us. I told Mountain Man about it later and he laughed saying, "You probably made their night." 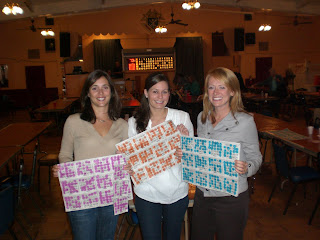 Following intermission, we went back to our table and started playing again. We were all stamping away, laughing and having a good time. And by "good time," I mean no 29-year old person should really enjoy Bingo quite like this. We weren't even winning! But I thought it was hilarious. There were points, at the peak of such enjoyment, that I thought it might be time to reevaluate my life.

I looked across to my friend Lisa and said, "This is awesome, we should do this every week!"

She glared at me and said, "Stephanie, do you want me to be single forever?"

I suppose making Thursday Bingo nights a weekly thing would put us on the fast track to dying alone in a house full of cats. Most of the people at Bingo night would old enough to be our grandparents.

But I don't care. It was fun. So let that be a warning to all of you Bingo regulars. Though maybe not every week, I will be back. And next time, I'm cleaning house.
Posted by Stephanie Gallman at 12:32 AM