Since I can remember, my dad's drink of choice has been Dewar's (scotch) and water. Apparently there was a time in his life when he liked PBR (his nickname was "PBR Charlie") but since I've known him he's always been a scotch man. Not just any scotch though. Dewar's.
My voice is on the deeper side for a woman, so when I am tired or coming down with a cold, I'm sometimes accused of being a seasoned scotch drinker. But the only scotch drinking that I have ever done has been purely accidental. It's a light enough liquor that when watered down, a scotch drink looks like water. And I've picked one up, more than once, taken a big sip thinking it was water.
Big mistake. 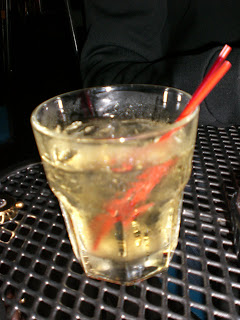 The handful of times I've done it, I've nearly spit the drink out, exclaiming, "Ugh, Dad, how do you drink this?"
But lately I've developed a curiosity about the beverage. There is something equally refined and bad-ass to me about a woman who drinks scotch. I think of scenes from movies or television shows where a woman storms up to a bar after a fight with her boyfriend and has the bartender pour her a scotch. Another woman heads home to her perfectly decorated house after a long day at work and pours herself a lowball of scotch from a crystal decanter. Do scenes like that happen in real life? I don't know, but there is a part of me that wants to be a scotch drinker, and not just sound like one.
So Day 48's thing I've never done before was to drink, and perhaps learn to enjoy, scotch.
The day started with much better intentions. I walked to the library, again, in search of a library card. And again, was denied because my public library doesn't open until noon on Fridays. Seriously, I wanted to know, why are they making this so hard for me?
I had friends coming in from out of town who know my dad pretty well, so they were on board to make the scotch challenge a success. They were more than on board, actually. In fact, Mark and Jen had a Dewar's and water waiting on me when I got to the restaurant where we were meeting.
"In honor of your dad," they said, and we all clinked glasses.
Sure. Only when I think of my dad I usually don't make the face I made when I took the first sip. Painful is the only word I can use to describe it.
My dad said scotch is an acquired taste. I think that means it tastes terrible and makes your taste buds burn, but if you make up your mind that you're going to drink it, eventually your body will have no other choice but to accept it.
I took another sip. 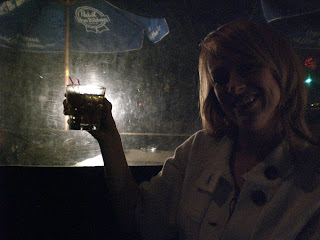 And, in between telling my friends the story of my trip to California and Boston, I took more sips. And pretty soon, scotch began to warm me up and relax me the way I believe it is supposed to. It still tasted pretty bad, so I took my sweet time finishing it.
We left the first restaurant and went to another venue, where I tried to order another Dewar's. The place didn't have it, though, so I was forced to try a different scotch. I can't remember the name of this scotch, but it was as unpleasant as Dewar's.
I finished two scotch drinks and never really enjoyed the taste of it. Maybe I've still got some acquiring to do. But I think I'll give it a few more tries before I give up on being a refined bad-ass woman.
Posted by Stephanie Gallman at 12:32 AM