We woke up in San Francisco with one full day to hang out before catching our flight to Boston. We remained on the no-agenda agenda. "Whatever!" was our motto. So we took off on foot to explore the city.

I had visited San Francisco the previous summer, so I left it up to Mountain Man to decide what he wanted to see and do, hoping that one of those things was something I'd never done before. 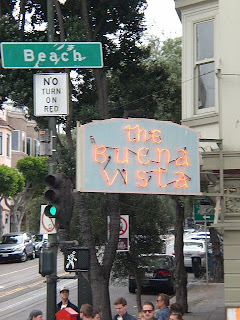 Before we left for the trip, Mountain Man casually mentioned his sister had just returned from San Francisco and had enjoyed Irish coffees at a place called The Buena Vista. He sort of threw it out there as an idea, not at all set on really finding the place. I had never heard of it, so I planned to ask Elizabeth about it later. And then lo and behold, we turned the corner to make our way towards Fisherman's Wharf, and there it was.

Serendipitous occurrences like this never happen to me, so I assumed it had to be Mountain Man. Perhaps that's why he abandoned his phone at Phish and just assumed we would bump into each other. Maybe stumbling upon places like The Buena Vista just happens to him.

I wonder if he also stumbles upon winning lottery tickets and designer shoes. If so, I might have to keep him around.
Mountain Man is Irish. I am not, but I look like I could be. Maybe it was the luck of the Irish, and those who look like they are.

Whatever it was, we felt like it was fate to belly up to the bar and make Day 40's thing I've never done before enjoy Irish Coffees at The Buena Vista in San Francisco.
The Buena Vista claims to have served America's first Irish coffee back in 1952. Back then, the owner of the Buena Vista challenged an international writer to help him recreate the "Irish Coffee" served at the Shannon Airport in Ireland. The two worked tirelessly, but they finally perfected their recipe, bringing the drink to the United States. 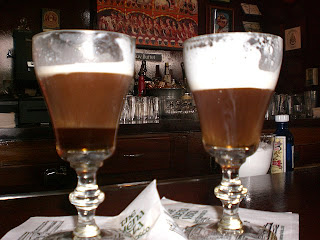 We weren't really aware of the story or the significance of the Buena Vista, but we definitely enjoyed our Irish Coffee breakfast. When we were done, we walked through Fisherman's Wharf to meet Elizabeth for lunch at the Ferry Building.
It was here where I was able to separate from Mountain Man long enough to explain to Elizabeth who he was and how we ended up on this trip together. I only had the time it took for Mountain Man to pick up his lunch and talk to his dad on the phone, so the story was brief. But Elizabeth seemed satisfied and we all enjoyed our food.
After lunch, we left Elizabeth and continued on to explore Alamo Square (where the Tanners from Full House lived) and then down Haight and Ashbury Streets (where the Grateful Dead lived). We ended up at Golden Gate Park, where I was asked to buy drugs at least twice (not the first time this had ever happened) and where I was reminded of one of the many reasons why I love San Francisco so much. I love that Mountain Man and I sat down on a bench and watched grade school kids at soccer practice while hearing hippies in a drum circle behind us. I call that diversity. 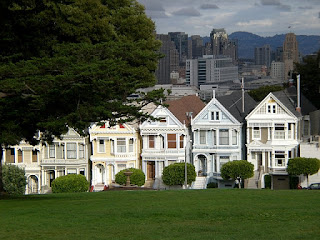 The plan was to meet Elizabeth and Kristof for drinks before we caught our plane to Boston, but we had a little bit of time before they got off work, so we did what any self-respecting San Francisco vacationer would do...we went to Happy Hour in the Haight.
Haight Street is a pretty popular one in San Francisco, full of locally owned stores, restaurants and bars. This is the area where the hippie movement began in San Francisco. It is also where Mountain Man and I had our first fight.

My mom always told me that nothing good happens after midnight. This was her justification for my 11:30pm curfew in high school. And although she's never said it, I'm sure that she also thinks that nothing good happens after an Irish Coffee and four beers. I think she's right.
To call the next few hours dramatic would be an understatement. The walk back to the trolley was long and was interrupted several times by our "discussions" in the street. We finally got to Elizabeth and Kristof and somehow managed put on the performance of our lifetimes. I hardly ever see her and I didn't want to make the last couple of hours uncomfortable for anyone. Saying goodbye to Elizabeth is always sad; compounded with everything else and I just about lost it on the streets of San Francisco.
Then we picked up our luggage, and raced to the airport, allowing the cab driver to experience round two (or was it three) of our "discussions." We were mad, sad, and drunk. I've never slept so good on a plane in my life. I guess there always is a silver lining.
Posted by Stephanie Gallman at 9:00 AM