In the days and weeks following the trip out west and to Boston, I scheduled several "catch up" lunches and dinners to tell those who wanted to know (and some who probably didn't care) all about it. The first time I told it was to my dad and it took the meal, plus the trip to and from the restaurant to tell it.

Conversations about the trip now go something like this: 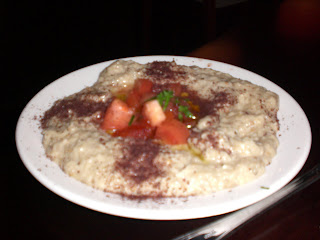 Them: "Tell me about California!"
Me: "It was awesome!"

When I met my friend Maribeth for dinner the Tuesday after my return, telling the story took most of dinner, with various interruptions to discuss her weekend as well as the food we were eating.
That's because on Day 52, the thing I've never done before was to eat Baba Ghanuj (I thought it was spelled Ganoush, but this is how they spell it on their menu), Lahem-Bi-Ajeen, and Drunken Halloumi, all Mediterranean dishes at Zaya in Inman Park http://www.zayarestaurant.com/. 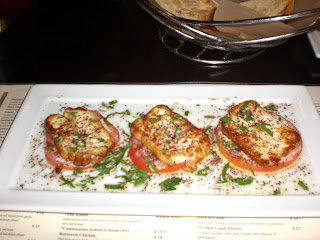 "Say wha?" you might be asking yourself. It's okay, my knowledge of Mediterranean food before this trip was limited to hummus, feta and gyros. Baba Ghanuj is an eggplant dip. It's also Vince Vaughn's character's nickname in Wedding Crashers. Has the blog come full circle already?

Lahem-Bi-Ajeen is a Lebanese meat pie. This particular Lahem-Bi-Ajeen included lamb and beef. And finally Drunken Halloumi, which was Cypriot Halloumi cheese seared in olive oil and flambéed with Ouzo, served with tomatoes and garlic sauce (I completely copied and pasted this description from the menu, but you take a look at the picture).
Really what else is there to say? I ordered, I ate. I liked. I plan to return.
The food and wine were delicious. And lucky for Maribeth, the cuisine made my endless chatter about California and Boston a little bit easier to take.
I think.
Posted by Stephanie Gallman at 10:36 PM