The day after I returned from Boston, my dad happened to be in Atlanta for business. We had discussed, prior to his arrival, the possibility of us going to dinner when he was in town. My work schedule is a little out of the ordinary, though, and I work most days until 9pm, past my dad's dinner time.

"That's too late for me for me to eat," he said when I told him what time I get off work, "But maybe I'll come by and see you at work." 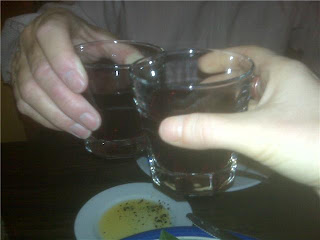 Too late? To see his daughter who lives out of town and who just returned from her 10-day vacation with some random dude? Really?

Meanwhile, my mom was back in South Carolina ready to gnaw her own arm off to hear about the trip. She would've met me at 2am in a dark alley in the worst neighborhood in Atlanta if it meant she would get to share a meal and hear this story from her undercommunicative daughter.

My dad was indifferent.

After what I can only assume was a stern discussion with my mother, my dad eventually came around and agreed to go out with me at 9pm. It's a good thing he did because I decided to make Day 44's thing I've never done before buy my dad dinner.

I know what you're thinking and you're right. Twenty-nine-years old and you've never bought your dad a meal? I scanned my adult life to try and remember a time when I may have done it and couldn't think of a thing. In fact, starting when I was in college, whenever my parents come visit me, not only have I never bought them dinner, I'd presuasively suggest we go to the nicest restuarants because I know that they would pay for it.

But this night, seeing as how he extended his dinner time and bed time for me, I would pick up the tab for our meal.

We ate at Figo, a Italian restaurant where you pay when you order and then the wait staff serves you at your table (not quite five course fine dining when it's on my dime). When we heard the total, my dad and I both reached for our wallets at the same time.

I looked him in the eye, smiled and said, "I got this, dad."

He looked surprised as he backed away from the counter and he laughed. I thought he might be weirded out a little bit, seeing as how it's been him my entire life reaching for his wallet when the bill comes, but he wasn't at all. My dad took to having dinner bought for him quite nicely. Especially, I think, because it was his spoiled daughter that was buying it.

I had just returned from Boston and was ready to talk about my trip, all of it, to anyone that would listen. So from the moment I picked him up from his hotel, I dove right in, begining wth how I decided to go on the trip, and then through each leg of our journey. He was probably thinking pretty early on that he deserved a lot more than dinner to suffer through this.

About mid-meal I had reached the part of the story when the fight with Mountain Man occurred. At that moment, and not before, I became increasingly aware that I was talking to my dad, so I had to approach this carefully. I wanted him to understand what happened, but the less detail, the better. I gave him more or less the blog version of what went down, and watched as a sympathetic look come over him.

His face was earnest and compassionate, like he could picture the scene and he could see his little girl upset in San Francisco with this dud(e) from the northeast.

And then I realized that this look wasn't for me. This look was for Mountain Man.

My dad wasn't thinking, "My poor, sweet daughter. How could anyone hurt her feelings so badly?" He was thinking, "Oh that poor guy."

Don't get me wrong, my dad is my biggest fan. He is very supportive of all of my shenanigans, even when he doesn't understand them, and sometimes I'll call him when I'm having a bad day just because he always laughs at all of my jokes. He remains the coolest guy I know. But when it comes to tears, emotional, freak out stuff, he prefers to keep his distance.

So with that look in his eyes it was as if he was saying to Mountain Man, "I know, dude. I've been there. It sucks. Glad you made it the whole week."

Yes, my trip story and all it's drama was probably a better story for my mom. But my dad hung in there and was a great listener. And he got a free meal out of it, so we were both winners.

He even called me the next day to thank me for dinner and to tell me he was headed back to South Carolina. And just like that, it seemed my dad was once again, the man in my life.

I guess it could be worse. I just hope he doesn't think I'm always paying.
Posted by Stephanie Gallman at 11:27 PM