Mountain Man and I arrived in Boston early to a chilly and cloudy day in Boston. The weather was like a metaphor for the the night before. But the sun was trying hard to peek through the clouds and I took that as a sign.

I wasn't really sure if or when I would forget the fight, but I was determined to not let it ruin the trip. Not without questioning many things, though: Am I too sensitive? (yes) Was the intensity of the fight heightened because of alcohol? (Isn't it always?) Why has this person who says he likes me now hurt my feelings twice in such a short period of time? (I still don't know) Do I believe that he, again, is sorry? (I'm probably an idiot here, but yes) 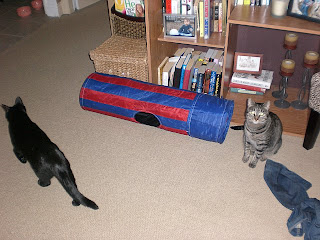 Considering all this, and more, with 72 hours to go, I decided to forgive Mountain Man, for now, and move forward with our plan to hang out in Boston.

After a nap, of course.

I was staying with my friend Lindsay, who lives in Cambridge. She explained that she would leave a key in her building's mail room so I could get into her place while she and her husband were at work.

"You can let yourself in and rest if you need to," she said, "Just be careful not to let the cats out."

Ugh, I thought to myself. Cats. I had forgotten Lindsay loves cats. I do not. Despite having no pets of my own, and I am definitely a dog person. I don't hate cats, I just haven't met any that I like. 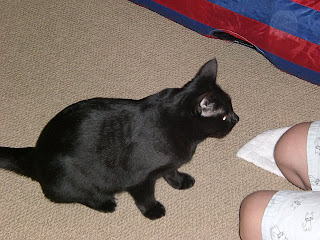 My high school friend Cindy's cat Figaro was crazy and mean. Sudden movements at her house were a big mistake and she often came to school with scratches on her hands and legs from where Figaro had flipped out on her. He never got me, but I never trusted that cat.

When we were roommates, San Francisco Elizabeth's cat used my bathroom mat as a litter box nearly every single day. It annoyed me at first and then it became comical. This cat and I had a mutual hatred for each other.

Perhaps it's also my fear, and the fear of all single girls that by liking cats, there is always the chance of becoming the "crazy cat lady." It's too risky. 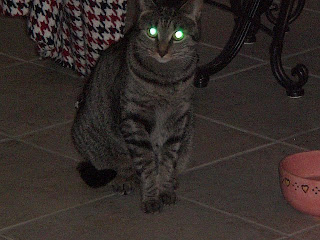 But Lindsay has cats, so I'd have to modify and adjust and at least tolerate them while in Boston. We arrived at her place, and just as she said they would be, the cats were waiting at the door. We cracked it slightly and tried to squeeze ourselves and our luggage through without leaving enough room for them to escape. Not an easy task.

I found myself talking to the cats like they were dogs.

"Stay. Staaaaaaaay." And they stayed. "Good girl!" Or was it a boy? I had no idea what the pets' names were, so I referred to them as "Boy" and "Girl."

We laid our luggage down and watched them circle both bags looking fascinated. I text messaged Lindsay that we had arrived and she said, "I forgot to tell you, the cats love suitcases." They really did.

I was expecting a weird stare down with these cats when we sat down on the couch, but there wasn't. They didn't walk around "meowing" for apparently no reason and they didn't circle around me with their backs arched looking ominous. The cats were laid back and kept their distance, which I appreciated. 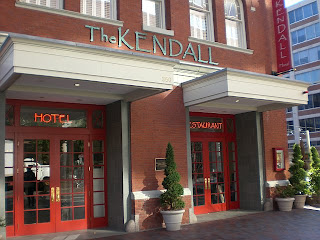 I laughed with Mountain Man that these cats were cool. They were hilarious, actually. And just like that, Day 41's thing I had never done before was meet cats that I actually like.

Alright, there were "Bostony/Cambridgy" things that I did on Day 41, too. Mountain Man and I ate lunch, for example at the Black Sheep restaurant at the Kendall hotel in Kendall Square. Orignially built in 1895 as the Engine 7 firehouse, the structure could accommodate stables for the horses, dormitories for the firemen and coal bunkers. The building was renovated in 2000 and became the Kendall hotel.

After lunch, Mountain Man and I walked among the geniuses at M.I.T. (that's the Massachusetts Institute of Technology for those of you who don't know) and wondered out loud to each other how obvious it was that we did not fit in there. These considerations led to a conversation about our own SAT scores, which more than ten years later, we both still 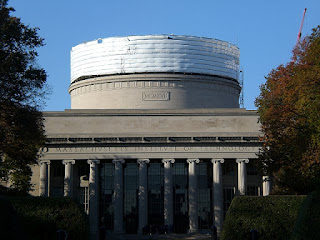 remember. No surprise, I am smarter than Mountain Man. At least I was in 1997.

We walked along the beautiful Charles River, and then Mountain Man got on a train to meet his family for dinner. While at the train stop, I was mistaken for a local by someone asking me for directions. I'm not going to lie, I loved it. I tried to help him as best I could, but the fact that I had no idea where I was quickly shined through and I politely introduced him to the T-stop attendant. Mountain Man saw the whole thing, so he can vouch for me that it really happened.

That night Lindsay, her husband Tarek, one of their friends and I all went to Ole, a Mexican restaurant in Cambridge. We stopped in a bar for a little bit, but all the night before's activity started to catch up to me and it was time to call it a night. Me, willingly calling it a night before closing time? Definitely something I've never done before. I think I'm really growing up.

When we got home Lindsay showed me how her cats, whose names are Zola and Mahsa, can do tricks too. They can sit, shake and jump up and down on their back legs. Impressive. Just like a dog.

Perhaps that's why these are cats that I like.
Posted by Stephanie Gallman at 11:58 PM