One day left of the Team Whatever tour, and I'm sure if you asked Mountain Man he'd tell you we saved the best for last because Sunday we went to the one place in Boston that he probably knows more about than Lindsay: Fenway Park.

The last day of vacation, Day 43, was full of more things I've never done before: tour the home of the Boston Red Sox to see the Green Monster and eat New England Clam Chowder in New England.
Part of the reason why Sunday's activities were so much fun for me is because it gave me an opportunity to try out my best Boston accent on words like "chowdah" and "monstah." Sometimes I'd throw a "wicked pissa" and "pahk the cah on Havahd Yad" out just for good measure, but those two phrases were difficult to work into normal conversation. I love a Boston accent, but my version needs a lot of work.
Though not a huge baseball fan myself, I've watched enough Sportscenter and read enough Facebook statuses during playoff time to understand that those who love baseball are serious about it. I had to see what all the fuss was about.
Fenway Park offers tours seven days a week, every hour on the hour. We assumed that on a Sunday afternoon in November we might be some of the few that would take this tour, but there were dozens of people there. 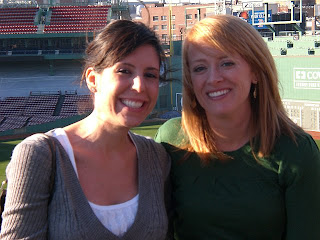 The tour guide led us in and around the park for an hour and she was a wealth of information like Lindsay was the day before. Mountain Man has been going to Red Sox games since he was a little kid, but all he could show me were all the different parts of the park he's sat in and where he was when the Red Sox won the World Series in 2004. I confess, I don't remember much of what he or the tour guide had to say.
But there were a few highlights. Fenway, for example, is the oldest Major League Baseball stadium still in use. The wooden seats in the grandstand have been there since the stadium was built in 1912. In right field there is a lone red seat in the bleachers that signifies the longest home run ever hit in Fenway by Ted Williams. The home run measured 502 feet (I didn't remember that, I had to look it up). 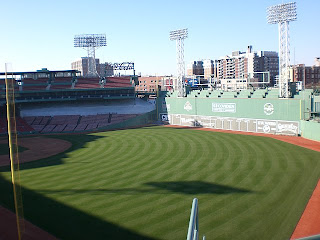 The Green Monster is a 37-foot high green wall in left field. The wall is famous for preventing homeruns that might clear the wall in other ballparks. That's all nice and cool and interesting, and the seats over there are where I would want to sit if I went to a game (for the bargain price of $160 a seat, face value). But I couldn't wait to get over there just so I could say "monstah."
The tour took us through the entire park, and behind the scenes to some areas that on a game day we would never have access to. But I still think the best way to see Fenway is to go to a baseball game there, eat hotdogs, drink beers and sing "Sweet Caroline" in the eighth inning. So I'm adding it to the list of things still left to do. 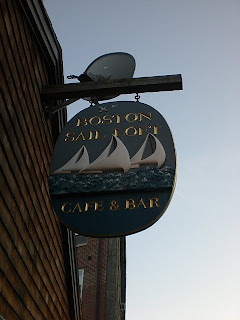 When the tour was over, we said goodbye to Lindsay and Tarek and took them back to Cambridge. Then Mountain Man and I went to the Boston Sail Loft on the Boston Hahbah for our last suppah (sorry, I'll stop). Not quite ready to leave Massachusetts, I ordered a Cape Cod and a cup of the best clam chowder I've ever had. According to Mountain Man's dad, the not-so-secret ingredient in their chowder is dill. The restaurant had a great view and we watched sailors taking advantage of the unseasonably warm temperatures on their boats in the water. We also recapped the entire week, and congratulated each other on having made our crazy idea a reality. Not drama-free, but overall a huge success.

Mountain Man took me to the airport and we said farewell. Our goodbye was weird, and sad. We were both painfully aware that our vacation was over, and it was time to go back to work. Sad. Plus, this wasn't a "see you next time" or "see you at Christmas" kind of goodbye. This was an "I had so much fun. And I'm not sure if or when we'll see each other again" goodbye. Really sad. But perhaps I was most sad because I had the Soul II Soul song "Back to Life, Back to Reality" playing like a soundtrack in my head.

So what about Mountain Man? I know you're all dying to know. All three of you.

Mountain Man has returned to his reality in the mountains, and I have returned to mine in the city. It's been one month since the trip ended, but some days I feel like it happened in another lifetime, and that Mountain Man lives on another planet and not just in another state. After a lot thought and some tears (I know, enough with the crying already), here is all I can tell you:

So far, we haven't quite figured out how to translate our super fun and crazy impulsive trip into anything more than just that. We're still friends, and I know that we care about each other very much. But as my dad has always said, "When it comes to relationships, timing is everything." Timing is everything. But in our case, so is geography. And initiative. And faith.

The first time Mountain Man and I ever met was for a very brief time in Philadelphia. He jokingly said to me after that meeting, "Well, Steph, we'll always have Philadelphia."

Indeed, we will. And now, we'll always have Yosemite, San Francisco (minus the five hours in the Haight), and Boston too. An amazing trip that I won't soon forget.

And maybe that's all it will ever be. And maybe not. I suppose it'll be ok either way.

Posted by Stephanie Gallman at 4:27 PM