Before I got to work on Wednesday, I received an email from my friend (and veteran) Mo. It was sent to me and several others.

The subject line was "Woot Off," and the email read, "Maybe we can convince Steph to buy something from Woot today as her blog idea. Unless she already has plans."

Prior to his email, "woot" was a word I used in my vocabulary quite often. Mostly in text messages or emails, and always to express elation. 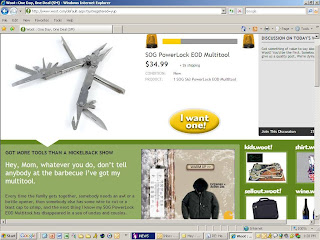 Used in this context, however, "woot" had now become a foreign word to me. Still, I assumed that a business named after such an awesome word had to be a good time. Plus, Mo suggested it and he rarely participates in things that aren't fun and I didn't have plans for today's activity. So Day 53's thing I'd never done before was participate in a Woot Off.

Woot.com is a website that sells one item each day at a discounted price. Once the item sells out, that day's sale is over. Sometimes the site hosts an unannounced "Woot Off," where they sell sell multiple items all day. During a Woot Off, an item goes up for sale and stays up until it sells out. Once it sells out, a new one goes up.

A Woot Off, by name, is exciting. But more than the name, it's exciting to see how long it will take an item to sell out and to see what the next item will be. Not to mention having the opportunity to purchase a SOG PowerLock EOD Multitool for a mere $35! If that's not exciting, I don't know what is.

This multitool was the first item up for sale when I joined the Woot Off. It included a screwdriver, pliers and some other tools that I don't know the names of and I'm certain I would never use. Is $35 even a good value for something like that? It wasn't hard to decide this would not be the item I would purchase. But I immediately could tell that I was going to enjoy this experience. Part of the fun of woot.com are the comments that the site features about each of the items.
The comments for the multitool, for example, said, "Got more tools than a Nickelback show." Woot.com shares my opinion of Nickelback! Good taste in music, clever writing AND gifts at a discount? I love Woot Offs!

I also learned that it takes a village to participate in a Woot Off because items come and go pretty quickly. Unfortunately, I did have to work that day so I couldn't keep woot.com on the computer all day. So, I'd receive updates from Mo and Justin keeping me updated as to what was new gifts were appearing. 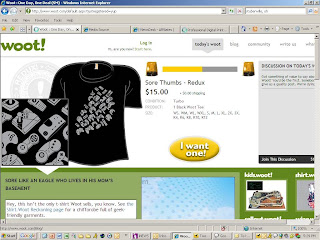 Hmm...Talking Robot? I was intrigued, but not ready to pull the trigger.

I missed out on some other items, including a remote control snack float that would've been awesome at a pool party. The pool wasn't included, though, unfortunately.

This was it. This is the gift that I wanted. A $30 camcorder? Think of all the possibilities, especially for the blog.

But within less than a minute, the camcorder had sold out. Damn!

Chuck Gallman already has a pressure washer. In fact, it might be one of his most prized possessions. But my brother had just bought a house, and to my knowledge he doesn't have one. Hmmm...

I'm not buying my brother a pressure washer. No chance.

I started thinking that I was never going to find just the right Woot gift. And then I worried that woot offs could be a metaphor for my life. Was I the type of person who couldn't settle on something (a pressure washer) because I always thought there was something better out there (a remote control snack float)? 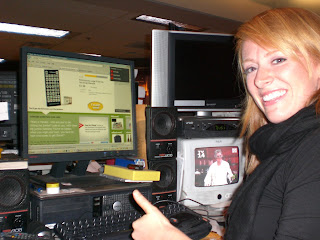 I really hope not.

I told myself to relax. This is Woot. Not life.

Pretty soon Mo left work and it was just me, alone with Woot.

At 6:46pm, I sent an email to Justin that said, "I'm buying blower!" That's a sentence I never thought I'd type, but it was an electronics "blower" that cleans out dust from computer and stereo equipment. It was $9 and I was pretty sure I could find a way to use it.

Noooooooooooo. I had to attend a short meeting with my supervisor at work and didn't have time to get it. I hate it when work gets in the way of the woot.

Mo had told me before that missing out quickly in a "Woot Off" was very likely. I had no idea. 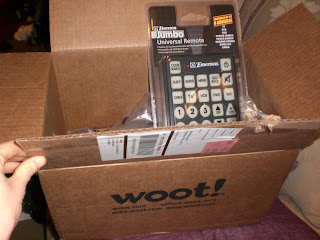 My work day was winding down and I was tired of wooting. Would I find something to buy by the day's end? And if I didn't, how would I be able to call the day a success? And then, as if the Woot Gods knew I was ready to throw in the towel, they sent me the gift that was made for me, made to be given to a member of my family.
An Emerson Jumbo Universal Remote for $1.

I suppose this is the same feeling people have when they meet "the one" they are meant to be with. I also suppose that having this feeling for a large remote is not a good thing.
I bought the remote and anxiously awaited its arrival. I was not disappointed. I sent Mo and Justin a picture of it.
Justin responded, "That's one big ass remote."
Indeed.
And one very lucky member of my family is getting that big ass remote for Christmas this year. Woot! Woot!
Posted by Stephanie Gallman at 7:36 AM