Day 313's thing I've never done before was to attend Martinis & IMAX at the Fernbank museum in Atlanta with a group of friends wanting to do something different on a Friday night.

This activity was something that I'd wanted to do for a while, on the list of, "things to do in Atlanta." Martinis & IMAX is, just as it sounds, a martini party at an IMAX movie at Fernbank, Atlanta's science museum (think the Museum of Natural History in New York). 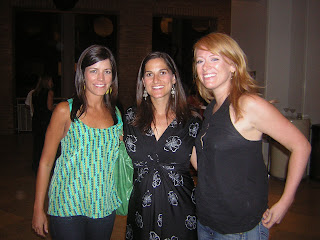 The evening presented several opportunities for new things (first IMAX movie, first trip to Fernbank, first time playing in a percussion drum circle made up of my own friends), all while doing something I knew I already loved to do: drink martinis.

I assumed ahead of going that like most things in Atlanta, this activity was pretty laid back and casual; so I suited up in normal summertime attire: jeans and a sleeveless shirt and headed over to Fernbank. When I got inside the museum, however, I was surprised to find it was a lot nicer than I was expecting. There were cocktail tables filling the lobby where there was an enormous dinosaur skeleton on display, a lounge singer performing with a band, and fancy cocktails being poured at bars around the perimeter of the room. I thought perhaps I should've dressed up a bit.

Emily, Scott and I met in the parking lot and hurried inside in the rain to meet Amy, Jeff and David. Fernbank offered a variety of different drinks, but Emily and I went with the old faithful, always delicious, dirty vodka martini, extra olives. We grabbed a seat and enjoyed the band for a while. And by "enjoy" I of course mean judging the lounge singer for her ill-fitting tight green dress.

We finished our drink and grabbed another before heading into the theater to watch the IMAX film, Pulse: A Stomp Odyssey. The film was made by the creators of Stomp, the stage show that, more or less, made banging on buckets entertaining. I saw Stomp years ago and was impressed at their ability to turn the super ordinary into something extraordinary. 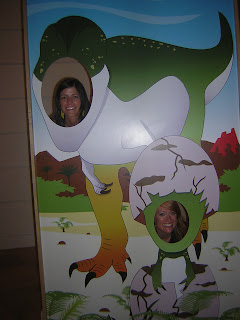 When I took my seat to watch Pulse, the only difference I could see between an IMAX film and any other film I've seen is that the screen is enormous. Like floor to ceiling huge. I'm sure there are probably many other ways IMAX films are different, and I look forward to someone explaining them to me, but regardless, the mere size of the screen was enough to make this movie-viewing experience completely different from anything I'd ever seen before. I felt like I was in the movie with them. It was awesome.

Pulse is like a journey across the world, showcasing the sites and sounds of different countries. The film's description says it's a celebration of the global beat. The film stars dancers and musicians who I suspect were those kids in elementary school that couldn't sit still and were constantly tapping their feet or their pencil on their desks or twirling across the classroom. Much like myself actually.

There are drummers in Sado Island, Japan, a couple of high school marching bands who march across the Brooklyn Bridge in New York, a flamenco dancer in Granada, Spain, Native American dancers in the deserts of New Mexico, drummers in West Africa. The list goes on and on.

There is no dialogue in the film, only music (made by the stars themselves) and movement. I didn't think I could be entertained by a movie without any words, but Pulse proved me wrong. I was mesmerized by the beautiful scenery and began adding to my mental list of new places I want to visit and new dance moves I want to try, new instruments I want to play.

The night began in a very entertaining fashion, which turned out to be only the beginning of much bigger and better things to come on Day 314.

Check out the trailer for Pulse right here.

Pulse moved us so much (pun intended), we started our own impromptu drum circle in the parking lot of Fernbank. You can check that out here.

Posted by Stephanie Gallman at 4:00 PM