On Day 319, we woke up planning to nothing other than continue our vacation activities: diving 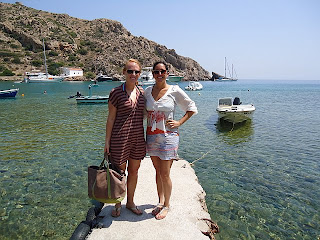 for sea urchins, tanning by Yaya's pool, sleeping wherever and whenever we wanted. In many ways, the trip had started to feel like a broken record. Like the best broken record there ever has been: sleep, boat, swim, tan, eat, and repeat.

I started to notice a pattern at our twice-daily sit down meals with Yaya that felt familiar to me. Somewhere in between me whispering under my breath, "This is so delicious," and happily indulging in another helping of whatever perfectly prepared food we were eating, Yaya would ask us what we wanted for lunch and dinner in the days to come.

Yaya, like members of my own family, likes to plan her next meal while still eating her current meal. Gallmans are notorious for this and it completely baffles me. How could I, taking my first bite of cereal at 9am, possibly know what I'm going to want in three hours for lunch, or in eight 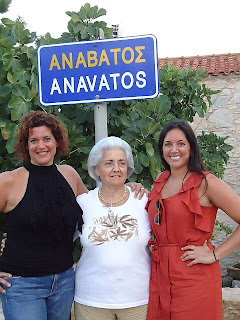 hours when it's time to have dinner? I'm obviously not a planner and I know this very fact is likely maddening to the more organized people in my life, but the constant need to know what we're eating for every meal in a week is both frustrating and humorous. In the case of my family, since we're dealing with a large group that includes kids and bedtimes and grocery shopping, I understand the need for some foresight and discussion. And in the case of Yaya, her goal is to please her grandchildren and she wants to make sure they get all of the meals they like to eat while they're in Greece. But the whole planning thing just goes against my natural tendency to just take things as they come, and eat when I'm hungry. I can't plan dinner now because I don't know what I'm going to feel like eating in six hours, or if I'm going to want to eat at all. But the Gallmans want to know. So does Yaya.

I make these comparisons because I had to chuckle thinking that while Chios, Greece and Oak Island, North Carolina are quite possibly the two most different places on earth, I felt an instant connection between them, strangely: perhaps it was the nothing to do, nowhere to be, family time at its finest feeling? And even though it wasn't my family with home I was enjoying this unbelievable vacation, I still felt the love. And as if Yaya had gone out of her way to make me feel at home by incorporating my own family traditions, we'd decided, while eating one of our meals on Day 318, that we would dine out on the evening of Day 319. 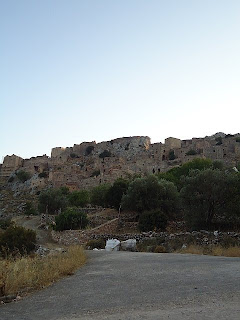 Thanks to an already established plan, Day 319's things I've never done before were to visit an abandoned city and to watch a sunset in Greece.

In addition to her lovely, super-romantic story about marrying Pappou on Day 318, Yaya also gave us a mini-history lesson about Chios, specifically about this town of Anavatos. Now I haven't been able to confirm that this next part is historically accurate, but I'm pretty sure that if Yaya told me the sky was green, I'd believe her, so I have no reason to think her story isn't true.

According to what Yaya knows, Anavatos had been able to resist the Massacre of Chios in 1822, thanks to having been built at the top of a steep, rocky mountain. The mass killing left tens of thousands dead, but because the terrain up to Anavatos was simply too treacherous, that city's people had been spared from the brutal attacks. That is, until a woman Yaya described as, "Not smart, not all together there, a village idiot-type," told a man promising to help her people just exactly how to navigate the terrain to get to Anavatos. She more or less showed him the route, unaware that when he got there, he would destroy Anavatos, and kill everyone in his path. Like I said, I have absolutely no proof that this story is factual, but after seeing the city, I definitely believe that something horrible happened there. 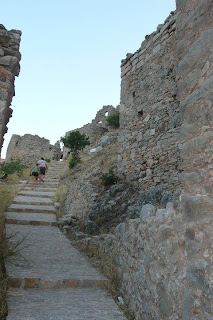 Getting to Anavatos in a car in 2010 felt every bit as difficult as it must've felt getting there in the 1800's. I can't recall ever getting motion sickness, but this is certainly the closest I've come. Yanni, the driver, did the best he could to get us there quickly and safely and without making us sick, but there was only so much he could do. The roads were steep and narrow and they winded back and forth; Anavatos was at the very top. Looking over the cliffs from a car window was nauseating.

Once we arrived at the top of the mountain, I thought we were on a movie set. The entire scene, the destroyed buildings, toppled over bricks, piles of debris, all looked like they were staged for the invasion scene of a film. Yaya insisted we walk to the top to check out the view; she said she would stay behind with Yanni at the car. The walk, she said, was just too much for her.

Katy decided she'd stay behind with Yaya while Jana and I walked to the top. 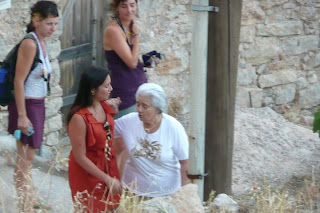 "Yaya, I don't want you to stay by yourself," Katy said, walking away with her.

"I'm fine. I don't need you to stay with me," Yaya returned. "You should go to the top to see the view."

"This could go on for a while," Jana said jokingly. She's seen her sister's will, and her grandmother's, and it was unsure who would win this battle.

They went back and forth for a solid five minutes, Yaya taking Katy's hand and guiding her to 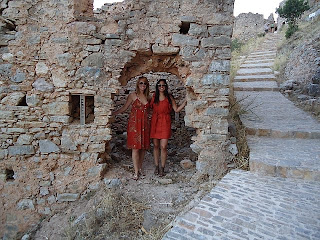 the stairs to start walking, and Katy turning around to following Yaya back to the car. It was Granddaughter vs. Grandmother in likely the sweetest fight I've ever witnessed. I'm not a gambling woman, but I would've taken Yaya as the winner of this scuffle, and I would've been right. Katy had no choice but to relent to Yaya's wishes that she walk to the top with the rest of us and enjoy the beautiful views.

Katy, Jana and I took off through Anavatos; I stopped repeatedly to take pictures of the town, which rivaled San Francisco in terms of ass workouts the hills were so steep. Yaya was right about the exquisite views, but there was a sense of sadness and mystery that I could feel. If the story that Yaya had told us was true, then the people of Anavatos had likely established a healthy sense of security at the top of the mountain, certain no harm would come to them, only to be accidentally betrayed by one of their own and susceptible to a hostile takeover. 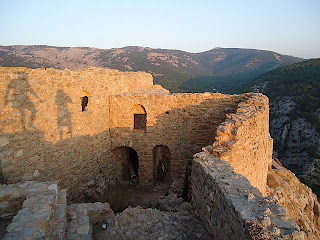 I just kept wondering, as I do whenever I'm in a place that is full of history, "What really happened here?"

We took a lot of pictures at the top, of the view, of the sun that was starting to set, and of ourselves (some of which felt inappropriate considering the devestation that happened there. But I can't help myself, I cry and laugh at inappropriate times.) We concluded that we all dressed inappropriately, and could've suffered fatal consequences trying to explore the damaged buildings in sandals and sundresses. I'm not a huge fan of heights anyway, and paired with an outfit that was poorly planned for exploring made me feel uneasy. 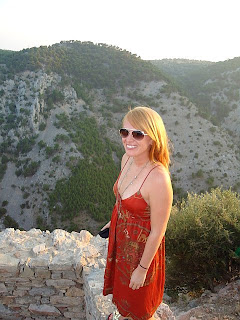 When we came back down to meet Yaya, she hurried us into the car so that we could get to dinner before the sun was completely gone. She then instructed Yanni to do whatever it took to get us there. And he did.

I don't know if Yaya called ahead, or if she knew the right people, but when we arrived at the restaurant, we were seated immediately at one of the best tables, in the center of everything, on a covered porch without any windows. And we made it just in time to watch the sun set into the hazy horizon, a gorgeous picture that luckily will be burned into my brain for a long time, thanks to my camera's inability to successfuly capture a picture of it. I'm not super picture-taker by any means, but I will accept user error only up to a certain point. Thankfully, Jana's camera, and camera skills, are better than mine. And I have an excellent memory.

I remember glancing briefly at a menu while we were there, but Yaya took charge of the ordering, just as she had with everything else. And order she did, because soon after we sat down, there was a constant flow of food (including fried cheese) and wine for at least an hour. Par for the course in Greece, we ate and drank like we were going to prison the next day. 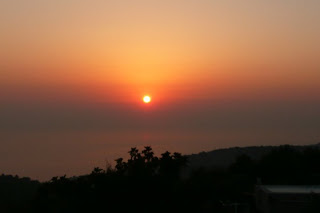 Much to Yaya's delight after being concerned about their whereabouts all day, Nico and Tatiana joined us towards the end of the meal, having returned to town after an expectedly racous time at the football/soccer match.

The meal was rich and loud with food and story-telling and the whole scene made me feel like I had temporarily staked a claim in this family who like mine, sometimes argues, often over-plans, and always over eats.

My stomach hurt, but the rest of me felt pretty damn good, even on the wind-blown trip back to Emporios. 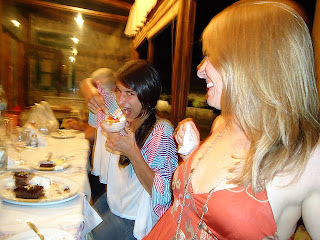 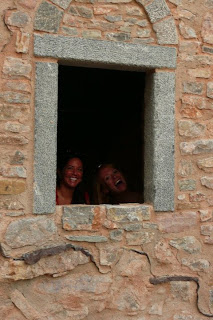 Posted by Stephanie Gallman at 11:35 AM