Leading up to Day 309, I had been able to ignore the advertisements for the popular Discovery series, "Shark Week,"because I had given up television for a week. But on Sunday when nearly everyone updated their Facebook statuses to reflect that the annual week-long series had returned, I couldn't ignore the apparently popular program anymore.

Day 309's thing I've never done before was to watch an episode of Shark Week. 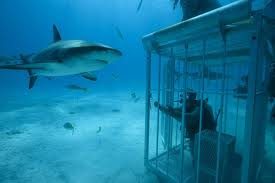 The episode I watched was "Shark Attack Survival Guide."

Despite being a huge beach-lover, and a naturally anxious person, I also happen to live in a constant state of denial that I will ever encounter a shark. The only shark bites I plan on coming into contact with are the kinds that are created by my friends Mark and Jen--they are cocktails made with spiced rum. They are delicious. And I drink them right up.

Still, of all the episodes offered by Discovery, this seemed the one I could benefit from the most. So reluctantly, I tuned in.

The show opens with a super intense host whose boat catches fire and he's forced to jump into the water. He talks about a scenario in 2002 when a fishing boat capsizes, forcing two fishermen into the water. Only one survives.

Two minutes in, and I'm depressed and my heart is racing.

I emailed Amanda, who was one of my 600 friends on Facebook who had promoted the show.

"I'm watching Shark Week for the blog. It's awful. They're talking about shark bites. The host is super intense. I have anxiety."

She convinced me to keep watching, insisting that it's not all like this. I didn't believe her. And I shouldn't have.

Because the host continued his uber dramatic presentation of how to survive a shark attack in deep water, in shallow water, in a deep water tank (you know, because I'm always in those during the summer.) Some of his suggestions/instructions made perfect sense, and clearly the point of the documentary was to inform viewers on what to do if ever put in such an awful situation, but some of what he said just sounded so asinine. I felt myself getting angry while also getting completely freaked out. 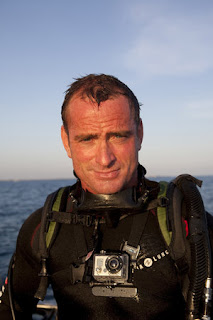 (After a victim suffers a shark bite in shallow water) "Does he look bad?" Uh, yeah. He just got bitten. By a shark. Are you seriously asking that?

"Don't panic, keep your calm." I'm in open water surrounded by sharks. Are you f-ing kidding me?

"If you lose your cool, you're making it worse." If I ever get bitten by a shark, I will most definitely lose my cool. Count on it.

I appreciate quality documentaries and exceptional cinematography, even about subjects I don't care about (sharks), so I have to appreciate Shark Week for its high quality production. But any future Shark Week viewing for me will be done with the volume turned off. And in small doses. With my remote control on quick standby ready to change it to something a little less heavy.

And I'd like to think that at least a few of these suggestions might occur to me if, God forbid, I am ever attacked by a shark. I fear, however, based on the huge amounts of anxiety I had watching this program and now writing about it, that should that day ever come, I will likely scream, thrash, carry on like a banche and die instantly, not remembering anything that I was taught.

I just hope I'm drinking my favorite Shark Bite when it happens.
Posted by Stephanie Gallman at 5:25 PM