When I lived with my friend Elizabeth during my last semester of college in Athens, she supplied our apartment with a kitchen table, a couch, a television, and a book that stayed in our living room entitled, Delilah, Love Someone Today.

The hardback book, written by the popular syndicated radio host Delilah, contained stories that the host had heard over the years from listeners 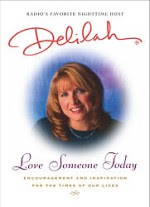 of her show; stories about falling in love, breaking up, terminal illnesses, tearful reunions. The book, given to Elizabeth as a joke by one of her other roommates, was used by us as a door stop, a wobbly furniture stabilizer and a source of late night entertainment.

Elizabeth was not, at age 21, nor was I, a huge fan of the radio show; I’m not sure what I thought was worse—the sappy stories or the easy-listening medleys of artists like the Eagles, Jason Mraz, and Dan Fogelberg that serve as musical dedications to loved ones. Every time I'd accidentally tune in on Delilah's show back then, I'd gag a little before quickly changing the station.

But admittedly, now, at age 29, I've found myself stumbling across Delilah's show and despite being an avid rock and roll enthusiast and concert go-er, I've been more inclined to stop and listen once in a while. I know, I know, judge all you want. She's a positive person, and though her musical selections still consist of sissy (read: sucky) light rock, when I'm in the mood to chill on my long trips to and from Charleston, I'll let Delilah guide my way home.

What if, I thought, Delilah could end my 0 for 2 streak when it comes to me talking to/hanging out with celebrities? On Day 310, I would attempt, again, to pimp Project 29 to 30 in the most hilarious of ways, by reaching out to the very woman who had given me so many laughs in the past.

Day 310's thing I've never done before, in honor of Elizabeth, and all the time we spent on our back porch at Milledge Place, was to write to Delilah.

Here is what I said:

Last September 27th, I turned 29, and started a year-long journey to do one new thing every single day for an entire year. The project was my gift to myself, and a vow to not let the last year of my twenties pass me by without enjoying, or challenging myself daily.

An aspiring writer, the challenge has also given me something to write about in a blog: http://www.project29to30.blogspot.com/.

The experiences have ranged from the silly, like wearing red fingernail polish for the first time to the crazy, like jumping into a freezing cold lake in the middle of winter, to the emotional, like having an abnormal spot on my back cut out and checked for skin cancer. The project hasn't always been easy, but I consider it my labor of love, and I'm so glad that I did it.

As my 30th birthday looms ahead, I find myself reflecting on the year and the project and all of the experiences that I have had because of it. Besides being emotional that I'm going to be 30, I've realized that what started as a blog about 365 new experiences has instead turned out to be about the cast of characters who star in my life every single day. They've supported me, encouraged me, loved me, and never once doubted that I wouldn't succeeded at my project.

My life hasn't exactly panned out the way I'd planned it in my head, and I will turn 30 as a single woman still terribly unsure of herself. But I feel immensely blessed by the people who have agreed to be a part of my blog, and more importantly, be a part of my life.

On September 27, 2010 when I close the chapter of my twenties and open the door to my thirties, I will do so celebrating them and how lucky I am to have them in my life. My 30-year old crazy, wonderful life.

And then I said something about dedicating a song to all of the people that have helped me make this blog, this project what it is.

The letter tugs at your heart strings, doesn't it?

Well apparently it didn't tug at Delilah's, because she is now the 3rd celebrity that I've reached out to who has denied me and Project 29 to 30.

Even though I wrote to her purely for laughs and for a prank I knew Elizabeth would get a kick out of, I am still hugely disappointed that even Delilah, the queen of tributes and shout-outs has also ignored me. But the letter wasn't for nothing. Despite not hearing from Delilah, or any of her producers, writing her helped me articulate exactly what I was feeling about the project and the fast approaching end of my 20s.

To my surprise, when I read back over my remarks to Delilah, I couldn’t deny that my attempts to be cheesy actually reflected how I sincerely felt about the people in my life who had so selflessly committed themselves to helping me achieve my 365 new things in 365 days goal. So while I may have revved up the melodrama a bit, I was sincere in my heartfelt gratitude. And somehow, turning 30 started to feel a little less scary.

I’m not sure I really needed to dedicate soft rock to my friends and supporters to let them know how truly appreciative I was, and am, but this day’s thing I’ve never done before sure helped get the ball rolling.
Posted by Stephanie Gallman at 12:40 PM

Email ThisBlogThis!Share to TwitterShare to FacebookShare to Pinterest
Labels: Elizabeth