One of the questions I'm commonly asked about the blog and the rules that I set forth for myself to do 365 new things in one year has to do with what happens when I do multiple things in one night. Could I transfer those new things to another day? If the thing I've never done before happens after midnight on a particular night, would it count as the next day's new activity?
My answer has always been, "No." If I go to Fernbank to drink 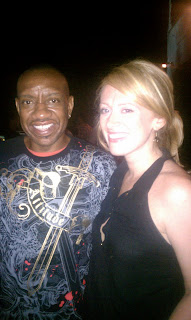 martinis and see an IMAX movie as the things I've never done before, and then something else happens to me that's new then I'll just consider that new thing a bonus, but not necessarily something for the blog.
That is, until Day 314.

Because what happened after midnight was so exciting, it deserves its own entry. After being ignored by Kelly Ripa, Paula Deen, and Delilah, Day 314's thing I've never done before was to finally make a connection with a celebrity.
After leaving Fernbank, the crew went to East Atlanta Village to grab some dinner and a couple of drinks. We also went to 529, a bar nearby, to see Otis Redding in concert. And by Otis Redding, I of course mean Otis Redding III, the son of "Sitting on the Dock of the Bay" Otis Redding. That Otis Redding has been dead since 1967.

Only when we arrived to hear him play, the only person at the venue was a DJ spinning records on the stage where we assumed Otis Redding would take the the stage. We opted to start our own dance party and wait for him to arrive. If only "start my own dance party" was something I'd never done before. But let's be serious, I'm a dancing machine; that wasn't new at all.

Thirty minutes into our dance party, we were getting dangerously close to quitting time and had to assume Otis Redding (the third) wasn't coming.

So we asked the creepy DJ on stage, who had been enjoying our antics all night. His response, "Um, he played here hours ago." 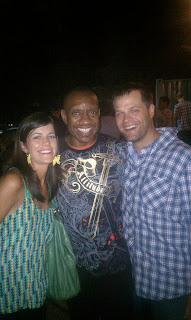 We decided to leave the venue upon hearing this news, defeated that our trip to Midway had caused us to miss the main event.

But all was not lost, because as we made our way out of 529, the Otis Redding III walked right in front of us.

"OTIS!," my friend Scott called after him, as if we'd all been friends for years.

Otis turned around and smiled, very gracious and nice. We walked over to him, and told him, all at once, shouting in his face, "We tried to come see you! You were already gone! We started a dance party!"

He seemed overwhelmed, but couldn't have been nicer. And then Emily asked if we could have our pictures made with him. He agreed.

Some might argue that Otis Redding III, the son of a musician who has been dead for more than 30 years, was hardly a celebrity encounter at all, and they might be right. But after striking out three times this year to meet/shake hands/cook with/work out with a celebrity, meeting a famous person's son felt pretty great.

So did the dance party.

Editor's Note: I'm completely aware that there appears to be a gaping whole in the front of my shirt, but I assure you it's an optical illusion, and nothing more.
Posted by Stephanie Gallman at 4:00 PM