Before I left work on Day 312, I saw a friend's Facebook status that read: "Sometimes I like randomly honking at people for no reason."
I hate it when people use text language to express themselves, but if ever there was an appropriate time for an "LOL," it was then. I literally laughed out loud at my desk. What a positively hilarious and awesome idea. And definitely something I've never done.

Don't get me wrong, I've thrown some honks out there in my day, but always with purpose: to 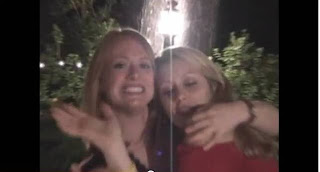 alert a friend I was outside their house to pick them up, or more commonly and demonstrative of Atlanta driving conditions, at the idiots trying to merge into my lane on top of me or those driving 55 miles per hour in the left lane.

But honk for no reason? That's new. That's fun. That's what blogs like mine are all about.

I turned to Justin who was sitting beside me and told him about my friend's Facebook status; he agreed that the idea was, in fact, awesome. But unlike me, I think Justin (who is from New Jersey so it kinda makes sense) intended for my fake honks to be mean-spirited ones. His idea: honk at someone, then raise my fist at them, or my middle finger, and pretend to angrily yell.

That's not exactly what I had in mind, though. Road rage is a real thing, especially in my fair city, and I didn't want to get myself killed. Plus, I had a feeling a mean-spirited honk wouldn't feel nearly as good as a friendly one. My plan: to honk and wave wildly as if the person was my long lost best friend from middle school.

So I hopped in my car after work and took off towards my house, my eyes darting back and forth to either sidewalk for someone to wave to, anxiously aiming to make Day 312's thing I've never done before to honk and wave at unsuspecting strangers.

An easy task, I figured. But there was no one. 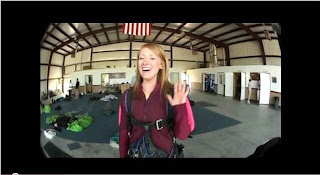 Five o'clock on a weekday afternoon in downtown Atlanta and not one person was on the street. I was shocked. I'm pretty used to things not completely panning out the way I plan for them to, but all I needed to pull this off was people. Scratch that. All I needed was one person to honk at and wave to.

Not to mention, traffic was moving considerably well, so I wasn't even stopped long enough to attempt a honk and wave at someone in another car. On any other day, I would've been extremely happy about this. But not today! I want to wave!

Finally when I turned the corner onto Spring Street, I spotted my first victim (or lucky recipient) walking down the street. He was so unassuming, I almost felt badly that I was probably about to annoy the hell out of him or scare the daylights out of him, possibly do both. I moved over into the right lane (carefully, of course), hit my horn, "Beep, Beep," while leaning slightly into my passenger seat to wave wildly at the guy through the window. I was smiling and laughing (to myself); I think I may have even said out loud, "Hey there!," even though I knew he couldn't hear me.

I will never forget the look on his face as long as I live. He looked stunned, and then he stared at me, understandably confused. He started to smile, (it's hard not to smile at someone smiling directly at you), but when he realized he didn't know me, he turned around to see if I was waving to someone behind him. I laughed out loud (again, LOL!) as I drove by and when I glanced at him in my rear view mirror, I saw that he had completely turned around to try and figure out who this crazy girl was waving in his direction. Before I drove out of sight, I saw him raise his hand to reluctantly wave in my direction.
I. Felt. Awesome.
I was already halfway home, and I'd only "gotten" one person, but I absolutely loved this task. I love it so much in fact, that I had to hold myself back when I started to encounter lots of homeless people on the side of the road trying to beat the Atlanta summer heat. I just felt like honking and waving at them would be terribly insensitive, as if I was saying, "I'm in an air-conditioned car and YOU'RE not, sucker!" I decided I'd be selective with my victims.

Like the second guy, for example. He was a skateboarder, using the stairs of an office building as his playground. I honked and waved just as I had to the first guy. This time, my antics nearly caused him to fall off his skateboard into the busy road. Whoops. Maybe I should've avoided honking and waving at him?

But every other stranger on the way home (and in the Target parking lot that I hit because I couldn't get enough) was fair game. I was hoping for some different reactions, but almost everyone reacted the same way the first guy did: stunned confusion, then a smile, then a delayed wave right back. Pure joy.

This day, this "thing I've never done before," ranks up there as one of the greatest things I've done in my 29th year. Like Day 100 when I slapped a hundred strangers high-five, this activity was cheap, it was easy, and it was so much fun. In fact, honking and waving may rank higher than Day 100, because I did it from the comfort of my own car and no germs were spread. 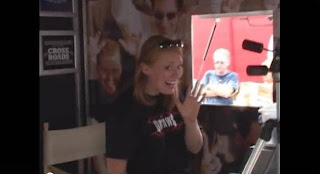 My only regret is that I didn't have a car full of friends there to wave with me, and therefore there are no authentic pictures of me actually honking and waving. (I included pictures of me waving, however, since that seems to be the move I choose if there is a video camera within a five mile radius.) I was by myself, smiling, waving and laughing hysterically all the way home. I've lived in Atlanta for six years and it was probably one of the best drives home I've ever had.

Do this. Do it today. On your way home. You will love it. Unless you're a generally un-fun, sucky person and then you probably won't.

But the rest of you, honk and wave! Honk and wave!
Posted by Stephanie Gallman at 9:59 AM