Day 285: What Goes Around, Comes Around

After seeing Bronson get iced on Day 280, I knew it was only a matter of time before I would attempt to ice someone myself. 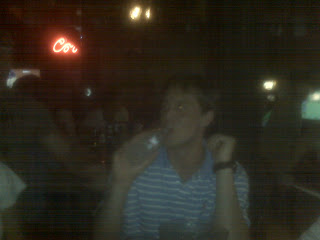 He and I and some of our other friends had been at a first birthday party for Karen and Ged's daughter, Jane. So naturally, after eating cake and ice cream with all of the kiddos, the next logical place to go to continue the party would be a dive bar (Mr. C's) to have some drinks.

So we did, demonstrating how my life continues to be a contradiction in terms: one-half 1st birthday parties, the other half seedy bars with tax-paying, contributing adults who act like irresponsible children.

It was at Mr. C's that the "icing" went down. I bought the Smirnoff Ice and made Paul present it. He secured the Smirnoff between his back right hip and his pants. He walked over to Philip and lifted his shirt slightly asking Philip to have a look at something's that had been irritating his back. 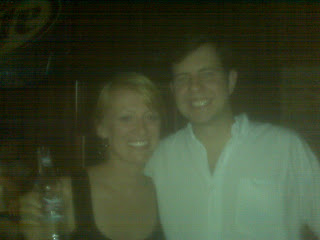 Philip did, found the Smirnoff, and was, therefore, iced. He took it down like a man, like Bronson had, but refused to get out of his chair to take a knee. We hazed him for a second, but eventually let it go.

I sat back, pretty excited, and proud, that Day 285's thing I've never done before was to ice someone. I don't know why it never occurred to me that this would be enough for everyone. I should know that I shouldn't dish it out if I can't take it, because as I was leaning back to enjoy the rest of the evening, my new friend Doug came over to where I was sitting with a bottle of Smirnoff Ice poking out of his pants.

Day 285's thing I've never done before was to ice someone and then get iced myself.

I had no choice to take it like a man just as I had seen Bronson and Philip do it.

I even got down on one knee, despite the fact that I was wearing a dress and we were in Mr. C's. 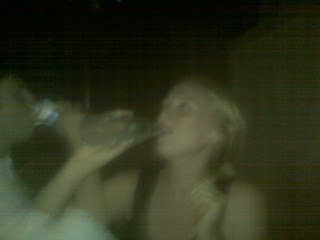 And then about halfway through I realized I was wearing a dress and I was in Mr. C's, so I stood up to finish the Smirnoff Ice.

Is it crazy to say that I actually like the way Smirnoff Ice tastes? There is something very redneck and high school about it. Perhaps that's why I like it.

"I'd like to get iced," Mindy said. We all gave her a look like she was crazy.

"You can't be serious," I said, taking my seat at the table.

Then she smiled as she looked at us and then at her boyfriend, Charles. I realized she wasn't talking about the Smirnoff kind of ice.

And sadly, this is where my icing career ends.

I hope.
Posted by Stephanie Gallman at 9:15 AM