Physical, full body pain from the fall on Day 272 that had left my backside, and my ego, bruised. I was also forced to face the painful reality that part of getting older is feeling the effects of such a dramatic fall two days after the fact. 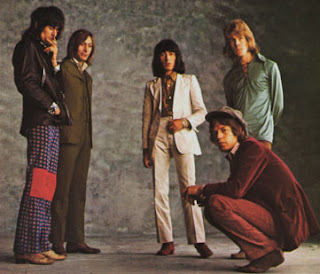 I woke up aching from head to toe and moved around most of the day with the speed and agility of a 70-year old woman with arthritis.

Surprising to me was that the physical pain had caused me a great deal of emotional pain too. Is this my body wasting away? A fall on Saturday and I'm completely out of commission on Monday? Getting older is so depressing.

Due to my physical limitations and my body's desire to be horizontal, Day 274's thing I've never done before was to watch the Rolling Stones documentary, Stones in Exile.

In 1971, The Rolling Stones fled the UK to live in France as tax exiles. Stones in Exile tells the story, through the voices of the band members, of their time there recording of the album, "Exile on Main Street." The band literally locked themselves in Keith Richards villa Nellcôte in the south of France to get it done and result, some argue, was the Rolling Stones most legendary album.

I love this album, I love documentaries, and now, thanks to this Stones in Exile, I am hopelessly in love with The Rolling Stones. The film cheered me up immediately and made me want to be a rock star.

Plus, as bad as I felt, I decided that if Mick Jagger, at age 67, can still get out on stage after more than 40 years of hard living and performing, then by God, I refuse to let a set of stairs take me down.

Posted by Stephanie Gallman at 8:45 PM