For the third and fourth days of the southeast Phish tour, the band came to Alpharetta, Georgia, a suburb north of Atlanta. On one hand, their decision to play there made perfect sense because the venue is new and clean and nice. But I was also confused because this was Phish, and the amphitheatre felt almost too new, too clean, and too nice. 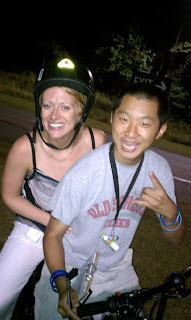 close enough to not necessarily warrant buying a hotel room, but far enough away to require safe, alternative transportation for anyone planning to consume adult beverages.

I opted to sleep in my own bed that weekend, so Day 279's thing I've never done before was to use Zingo Transportation.

Zingo was founded and exists on the understanding that one of the reasons that people drive after having too many drinks is because they don't want to wake up the next day without their car. A Zingo driver will actually drive your car home for you.

I give all the credit to my friends Philip and Scott for this idea. They use the service for a lot of Georgia games geting to and from Athens. For the Phish concert, we drove my car up to Alpharetta, tailgated for a little bit and then went into the show.

After the concert was over, the plan was to meet the Zingo driver back at my car. It occurred to me just before meeting him that I wasn't exactly sure how this service worked, or what was going to happen when we got back to our destination in Atlanta. Once I saw the driver in the parking lot, though, wearing a helmet, holding a clipboard, and sitting on a folding motorbike, it started to make sense. 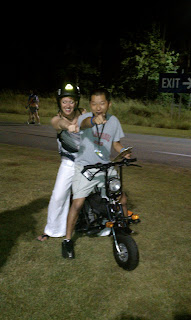 I feel the need to repeat it over and over again because I did not know such a thing existed until this night. Once I did, and once I took a seat on it, I wanted everyone to know about it. I was so fascinated by this piece of machinery, and by this driver and his clipboard, I didn't know what to do with myself. I think I asked the driver a dozen questions about how it worked, how long he'd been a Zingo driver, what's the craziest thing that ever happened to him on a pickup, and of course, more about the folding motorbike.

I took so much time asking him questions about the service and the motorbike, that it didn't occur to me that my entire group was waiting for me at the car. Philip had called my cell phone repeatedly telling me to bring the driver to the car so we could go. If it was up to me, I would've ditched my car and everyone else to take the motorbike back to Atlanta, but I don't think the driver was up for it.

So we went through with the original plan to pile into my car. The Zingo driver put his folding motorbike in my trunk, and he drove us home. Like any cab driver, he had to endure us shouting at him and at each other about how awesome the show was and what our favorite part was.

When we arrived at our destination, we paid him, he took his super awesome motorbike out of the trunk and sped away. We were safe, nobody drove irresponsibly and in the morning, I woke up and my car was right there.

Everyone wins with Zingo. Especially the driver with the folding motorbike.
Posted by Stephanie Gallman at 6:30 PM