On Day 277 I began what FF had started referring to as the, "Magical Mystery Tour." 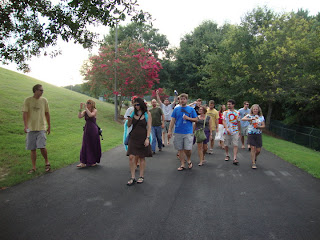 to Walnut Creek Amphitheatre in Raleigh, North Carolina for Day #1 of the southeast tour.
This was also the first time I'd gone to a Phish concert with someone who had seen the band less times than I had.
Her name was Patty, and she had recently married a Phish fan, so while she had heard their music before, this was her first time ever seeing them live. Her husband, my friend Andrew, has been seeing the band since he was in high school. I'm pretty sure anything she wanted to know about Phish, he had already told her.
Yet my excitement at not being the newbie or the first time ever took over and I decided to take it upon myself to drop as much Phish knowledge on her as I could.
Patty, because she's a nice person, smiled while she listened to what I had to say.
"When they play 'Harry Hood,' everyone launches glowsticks into the air. They call it a glowstick war."

"During 'You Enjoy Myself,' (lead guitarist) Trey and (bassist) Mike will jump all around on mini-trampolines while playing their instruments." 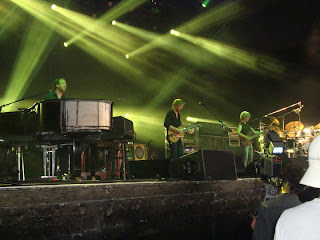 "Some people think of (lighting director) Chris Kuroda as the fifth member of the band because what he adds to the show."
"A lot of my favorite songs that Phish performs come from Trey's senior thesis at Goddard College. The songs are all about this guy Colonel Forbin who has a dog and he finds himself in a mythical place called Gamehendge . . ."
As these things were coming out of my mouth, I realized two things:
First, I had likely succeeded, with my unsolicited remarks, of stripping Patty of her will to live.

Secondly, this band, that I've dedicated a great deal of time and money to seeing for the last seven years, sounds both completely ridiculous and like the most fun band ever. For 6-year olds.
Maybe Phish, like the Internet, and sorority t-shirts with Dave Matthews Band quotes on them, isn't meant to be explained or understood. It's just meant to be fun. I decided I'm better off just enjoying the fellowship, enjoying the music, but flying under the radar as it comes to the this band.
And just like that, I heard, "Free," one of Phish favorite songs. I took it as a sign to free Patty from my insanity and leave it at Walnut Creek Amphitheatre as the thing I've never done before.
Posted by Stephanie Gallman at 11:50 PM