On Day 278, Magical Mystery Tour traveled to Charlotte, North Carolina, where we met up more friends, including my brother, Jeff and sister-in-law, Katie. This was the first Phish concert I'd ever atteneded with Katie and her second time ever seeing the band. She proved, again, that she can have fun wherever she goes. Hanging out with her at a Phish concert was something that I'd never done before. 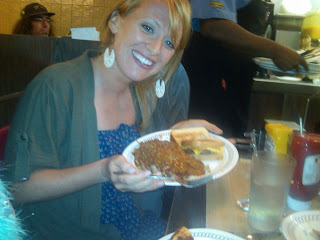 But it wasn't the thing I've never done before.

That thing, that most glorious idea came after the concert, when we decided to introduce Laney, currently a southern California girl, to one of the greatest things the south has to offer: Waffle House.

For those of you who don't know what Waffle House is, I consider that a shame, and I'm sorry. It's a popular restaurant chain found on nearly every interstate exit in the south; Waffle House restaurants are open 24 hours a day and they serve up an array of greasy breakfast foods: eggs, bacon, grits, sausage, and of course, waffles.

One of the novelties of Waffle House is their hash browns, which they offer a variety of different ways:

I'm usually a smothered, covered, and diced kind of gal, but on Day 278, as the thing I've never done before, I ordered my Waffle House hash browns, "All the way."

Believe it or not, eating hash browns was on the list of things I wanted to do in my 29th year. I think I've always wanted to order something, "All the way." It just sounds cool. Like going up to a bartender and saying, while nodding, "Just the usual." 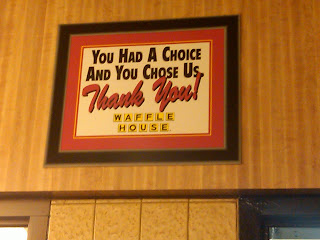 When the waitress came to take our order, I told her that I wanted a bacon, egg and cheese sandwich and then reading off the menu, said triumphantly, "And I'd like my hashbrowns scattered, smothered, covered, chunked, diced, peppered, capped and topped."

"All the way?," she asked, almost annoyed that I decided to recite all of the words. I didn't care.

The waitress nodded and walked away. She put our order in and we waited. We talked about the show, and I may or may not have played "Special Lady," an original Waffle House song on the juke box.

When I saw our waitress carrying our plates of completely unhealthy, completely delicious fried food, I was excited. The hash browns were grilled to perfection and even with all of the extra ingredients, I couldn't wait to dive in. That is, until she turned towards a vat of chili, dipped a stainless steel ladle inside and poured a heaping scoopful of it all over my perfect hash browns. My stomach turned.

She put the plate in front of me and I stared at it for a little while. The chili was daunting, and I knew that once I moved past the generous helping, I still had diced tomatoes, grilled onions, mushroom caps, chunks of ham, jalapeno peppers, and cheese to eat. I think I got heartburn just looking at it. 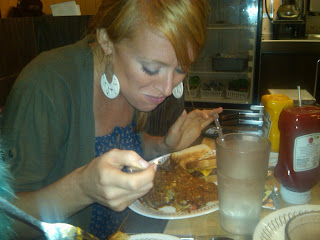 I took a bite, slowly, hoping that if I tried, maybe I could taste each individual ingredient. I quickly realized that this was a lost cause, and likely not ever going to happen. So I treated this experiment like my own "Woman vs. Food," and I dove right in.

In all the years I've been enjoying late night fare from Waffle House, I had yet to be let down. I also hadn't ever really strayed from my standard order. But going all the way paid off as far as these hash browns go. They were good. I don't know who Bert is, but he makes tasty chili. It's a good thing, too, because sometimes the chili was all I could taste.

As we were leaving to head back to the hotel, Laney, pleased with her first Waffle House experience, announced to everyone in the car, "Well that was just slightly less than amazing."

Though I think she was talking about her own meal, I'd say that applies to my scattered, smothered, covered, chopped, capped, diced, peppered, capped and topped hash browns too.
Posted by Stephanie Gallman at 7:50 PM