"I'm going to Tom's lake house up on Lake Lanier. Come with me," he said. 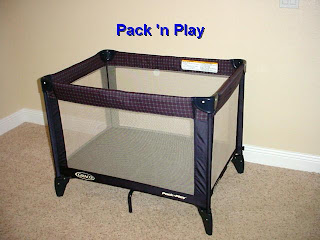 "Absolutely not," were the first words that came to mind.

The first words that came out of my mouth, though, were, "That sounds fun . . .but I don't think so . . .I just woke up."
"Come on! The lake will make you feel better. You can sleep on the way," he said.
I could not argue with that point. Plus, I had no other plans that day than to lie on my couch and nap intermmitently (a favorite Sunday activity of mine), and I had a bathing suit and cover up in my car (a fact that both pleased and fascinated FF. I mean, really, who travels with swim wear all the time? Answer: those of us who still wish they lived at the beach.)
I had no more excuses left. I did not want to go, but in the spirit of this year, here's to saying, "yes" when I feel like saying, "no."
When we got to Tom's parents' lake house, I instantly remembered that I had been there before, years ago, when Tom and I were in college together. Visiting Lake Lanier was not going to suffice as the thing I've never done before.
"Do you want to set up T's (he and Taylor's son) Pack N Play?," Tom asked me.

"Tom, don't ask her to do that," Taylor exlaimed, before I could answer.
I'm pretty sure she said that because she didn't want me, the guest, to do any work, though it occurred to me later that maybe she was concerned that I'm a complete idiot and might do something during the set up that could unintentionally hurt her son.
"I don't mind. I'll do it," I said.
And so Tom walked me through, step by step on how to set up a Pack N Play. I didn't find it to be particularly hard, though now that it's months later, I couldn't tell you any of the steps. I follow directions well, though, all of you moms, so if you need me to baby-sit, I'm sure I could figure it out. I'm not as irresponsible as I look, or as some of my actions may reflect.
The next thing I did that I'd never done before, on the other hand, will stay with me for a long time, and it happened on a boat ride that Tom, FF and I took later that day.
Day 273's thing I've never done before was to visit Lake Lanier's Cocktail Cove.
The name, "Cocktail Cove," does a pretty good job of explaining what the place is all about--a cove on the lake where boats park and drink cocktails.
On second thought, if they really wanted to be clear perhaps they should've called it, "Cocktail Cove full of awful people with barbed wire tattoos and fake boobs wearing Confederate flag string bikinis dancing promiscuously while listening to Nickelback, smoking Menthol cigarettes and drinking Hunch Punch out of insulated cups donning their names in puff paint."
Tom prepared me for the outward cheesiness of Cocktail Cove, but I wasn't quite prepared to see a boat named "The G Spot," with the "G" in the style of the University of Georgia "G." Stay classy, fellow Bulldogs.
If forced to spend a day there, I would have, without a doubt, enjoyed myself. I've been told by others that I could have fun in a paper bag, and I believe it's true. I may have even joined in on some of the shenanigans that I experienced on my short trip, including, but not limited to, booty-dancing with strangers on other boats, screaming the lyrics to Bob Marley songs, and stumbling around wasted with my bathing suit barely covering my private parts. 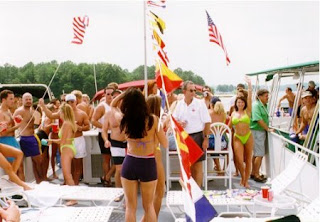 But overall, Cocktail Cove for me is a lot like the Pavilion at Myrtle Beach. I'm glad I went to see what all the fuss was about, but if I never went back, I think I'd be okay with that.
According to Tom, this Cocktail Cove is different from the Cocktail Cove of a few years ago, but only in location. The people, he said, are more or less the same, and since I'd been to his lake house before there is a good chance I'd been to the old location. I'd like to think I'd remember a place so unforgettable, but apparently not.

If what Tom said is true, I think I have a way to market the new Cocktail Cove.
Cocktail Cove: New Location, Same Terrible People
Posted by Stephanie Gallman at 7:00 PM