Day 210: The Tree that Owns Itself

My friend Rebecca's baby shower on Day 210 was in Athens, Georgia, the city where we met and went to college. She is one of the fortunate ones who made a home in our college town after we graduated. 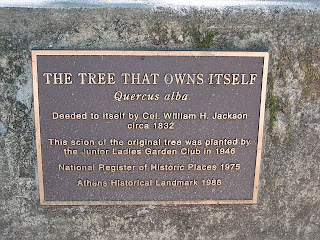 The shower was fun, as it brought together a group of girls who I rarely get to see together all at once. Plus, it was the topper on an action-packed weekend and I still had a two week vacation waiting me. I was feeling pretty great.

Hearing my friends "Ooooh" and "Aaaah" over the diaper cake that I made on Day 209 felt good too and I was happy that my drama-filled attempt at craftiness had paid off.

"So is the diaper cake the thing you've never done before today, or yesterday?" someone in the crowd who reads the blog asked me.

"Well, then what's your thing for today?"

I thought long and hard about what I could do in Athens that I hadn't done before. But having had the privilege of living there for four and a half years (I double majored, give me a break), there wasn't a lot of ground that I hadn’t already covered.

We joked at Rebecca's brunch that I should ring the doorbell at our old sorority house and either run away or ask whoever answered the door for a tour so I could take a picture by my old composite picture. I would’ve done it, but no one would come with me, and I wasn’t about to do that by myself.

I had already thought of something else that I wanted to do, something that would be easy.

There is an Athens landmark that I had actually never seen before, so I dragged my friend Doris, 8 months pregnant, to see The Tree that Owns Itself as Day 210's thing I've never done before.

"Does anyone know the story about the tree?," I asked at lunch.

The question was met with blank stares and lots of shoulder shrugs.

Interesting that these women, who remember every 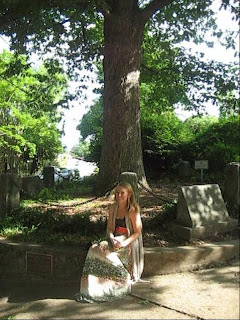 embarrassing thing we ever did the four and a half years we were in school together, and not one of them recalls what this local landmark is all about.

Doris pointed out that she thought she'd been to a party on Finley Street in college and therefore had seen the tree, but that's all she could tell me about it.

She suggested that there might be a sign or something marking the tree that would tell us what it's all about.

So with a little help from Rebecca's husband with directions, we drove there. I missed the turn the first time, but I eventually took a left onto Finley from Broad Street and drove up a steep hill.

At the top of the hill was the tree, surrounded by a fence, and just as Doris suggested, a sign naming it "The Tree that Owns Itself."

We parked the car in front of a house and got out.

"Don't all trees own themselves?," I wondered aloud. "I mean, they're trees, who else owns them?"

Reading the sign in front of the tree, Doris said, "I think you're going to need to look this one up," Doris said, "This sign doesn't say anything." 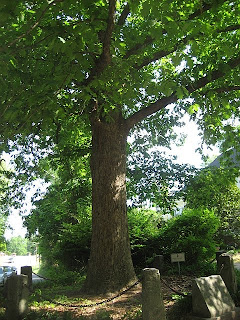 We walked around the tree, took a few pictures and that was about it. It was indeed a nice tree, but there wasn't a lot to do there.

I did look it up when I got home.

The story goes that between the years 1820 and 1832, in a desire to protect the tree, the owner of the land, William H. Jackson, deeded to the tree ownership of itself and the surrounding land. Though unclear whether such a deed ever actually existed, or still exists, the current actual plot map for the property near the tree does not include the tree’s oddly shaped corner.

In 1942, the tree fell and another one was planted in its place. That tree, the one that we visited, is referred to as "The Son of the Tree that Owns Itself."

Doing research on what the tree means, I also read that the stone tablet near the tree, the one that Doris and I couldn't read, apparently says, "FOR AND IN CONSIDERATION OF THE GREAT LOVE I BEAR THIS TREE AND THE GREAT DESIRE I HAVE FOR ITS PROTECTION FOR ALL TIME, I CONVEY ENTIRE POSSESSION OF ITSELF AND ALL LAND WITHIN EIGHT FEET OF THE TREE ON ALL SIDES." WILLIAM H. JACKSON

A tree. That belongs to no one but itself.
Posted by Stephanie Gallman at 9:00 AM