On Day 206, I made another day trip to Mansfield, Ohio for work. I flew up and flew back on the same day.

I was ridiculously busy while I was there, so there was no time to do something that I'd never done before. There wasn't even any time to eat, so I managed to stay a vegetarian for another day. A hungry, grumpy vegetarian. 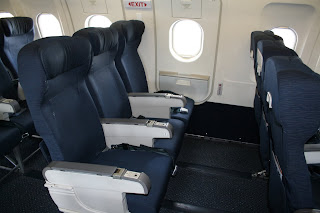 I planned on ordering something from the SkyMall catalog as the thing that I'd never done before, but thanks to US Airways, I didn’t have to. Because much to my delight, Day 206's thing I've never done before was to sit in an exit row.

Many of my tall friends tell me that they often request the exit row so that they will have room to stretch their legs on long flights. I'm just 5'7", not really tall enough to make a case for the extra room, so part of me felt badly that they booked me in this row. A taller person would have benefited much more than I did.

I'm lying. I really didn't feel that badly. Because the exit row rules.

When I got to the row, I was delighted that my row mates didn’t have to get out of their seats to let me by. That's how much room there is in an exit row. I walked right past them with ease to get to my window seat. Once there, I buckled my seat belt and stretched my legs in front of me, feeling relaxed.

Who knew extra leg room could be so enjoyable? All that space felt like a party!

I watched as other travelers boarded the plane and noticed them staring at me, and everyone else on my row. Some of them were almost glaring at us.

I assumed, at first, that they were glaring because they were jealous of all of our leg room. I couldn't blame them for that. Then I thought maybe they were checking me out to make sure I was capable of opening the exit door should the plane go down. I was starting to see that with great power comes great responsibility.

Before diving into the safety announcements for all of the passengers, a sweet flight attendant paused by our row, leaned on the aisle seat and quietly said to us, "You're all aware that you're seated in an exit row?"

"And you're prepared, in the event of an emergency, to assist in opening the exit door and assisting others?"

"And I just want to make sure that you can all read, speak, and understand English?"

Well, yes. But at what point during an airplane emergency would I be required to read anything?

Is there literature that will be handed out on “How not to die in an airplane crash?" My cousin Anne is a flight attendant. I made a mental note to ask her why those sitting in an exit row have to know how to read English.

Furthermore, and this goes back to her second question, if the plane is going down, I don’t know that I will be of much use to anyone but myself. The whole assisting others thing sounds good in theory, but the chances of that actually happening in the event of an emergency are slim. I’d probably just open the door and heave myself out and let everyone else fiend for themselves. I’m a pretty considerate person normally, but if the plane is plummeting to the ground, I confess I might just be looking out for number one.

News headlines are made out of exit row passengers who forgo their own safety to rush to the aid of others in times of emergency. My headline would likely read, “Woman Successfully Opens Exit Row Seat, Saves Only Herself.”

I prayed to God that he would keep us accident free, not only because I didn't want to die, but because I knew if something were to happen while I was sitting on the exit row, I'd completely blow it.

The extra room is nice, but I don't think I'm ready for the responsibility of this highly coveted seat.

Now flying first class, on the other hand, I think I could handle that.
Posted by Stephanie Gallman at 3:00 PM