On Sunday, Day 203, I went over to my friend Ashley's to meet her brand new baby boy, Robert.

Robert is the first baby to have ever kicked me while he was still in his mother's womb, back on Day 167. I was happy for our first face to face meeting. He is a gorgeous baby, just like his parents, with dark hair and a perfect little mouth.
While I was catching up with Ashley and John, hearing labor stories that make me question whether or not I could ever have a baby myself, Robert made a sound like he 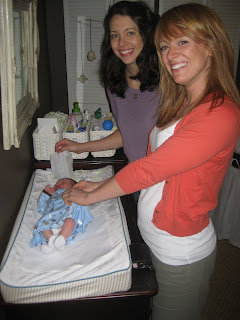 dropped a bomb in his diaper. I was shocked that a person so small was capable of creating a sound so loud.

Ashley and John, obviously having already heard him do this before, laughed and explained that yes, their son was responsible for that sound, and that they at one time were also surprised by it. Not anymore though.

The sound wasn't just gas, either. Robert needed to have his diaper changed.
"Have you ever changed a newborn's diaper?" Ashley asked me.
I did a quick scan in my head through all of my babysitting memories, certain that at some point I had to have changed a diaper. But none that I could recall, and never, I knew for certain, on a newborn.

"Have you ever seen a newborn's poop?," John asked me.

"It's different," Ashley said, "Not what you would expect."

I paused to consider the subject matter of this conversation, and I knew their lives would never be the same again.

"No," I said slowly, assuming now that baby poo must be 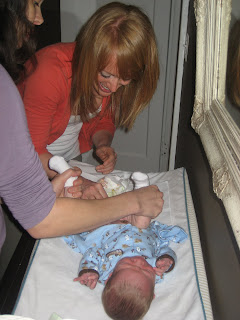 different from adult poo, or else why would we even be talking about it?

"It looks like Grey Poupon!" John said, almost giddy.
Weird, I thought. I almost asked, "Why?," but I doubted either of them knew why. It just does.
So let's go take a look, I thought, and make Day 203's thing I've never done before to change a newborn's diaper.
Ashley carried Baby Robert back to his changing table and I handed John my camera and let him record the change.
Despite knowing very little about babies, I wasn't terribly concerned or nervous about this one. Probably because if something went terribly wrong, I had Robert's Mom and Dad standing right beside me to step in.
Based on the sound Robert had emitted that prompted us to change him in the first place, I assumed his diaper would contain an entire jar of Grey Poupon. But that wasn't the case at all.

Inside was just a small amount of yellow poo. Weird, but not disgusting.

I went in with a baby wipe and cleaned off the Grey Poupon. Robert held still and cried only a little, which I appreciated. I was ready to start figuring out the diaper when Ashley told me to wait. She handed me a cotton pad with ointment on it and said I needed to put it on his circumcision scar. 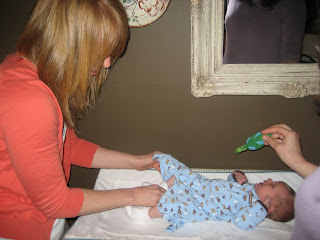 I'm down with cleaning the poo, but dealing with surgery wounds in very sensitive areas? I did NOT sign on for that. I did get a little nervous doing this, and I felt badly for the little guy, all of these people staring at his area.

I did as I was told, and fastened the diaper successfully.

Dressing him after the diaper change, however, was an entirely different story. I thought I had it right, but then he tried to straighten his legs and was more or less trapped in his outfit. The snaps were tricky. I called in for help from Ashley to dress him.

So, for all of the new moms and moms-to-be, Aunt Steph can change diapers and is available for babysitting.
Posted by Stephanie Gallman at 9:49 PM