Day 200 was Tax Day. For the first time ever, I paid my taxes on April 15th. Not on purpose, not for the blog, but because I am a slacker.

There were a lot of blog possibilities that were thrown around ahead of the 200 day milestone, some of which included paying for people to mail their tax returns or handing out 200 cookies to tax payers mailing their returns.
All were shot down for various reasons (who would take a cookie from a complete stranger?), and I wasn't really excited about any of them.
I again consulted a random act of kindness website, which I've done numerous times before and was intrigued by one of its suggestions to, "Compliment a Stranger." 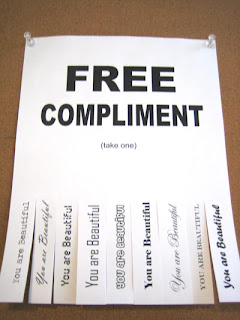 I purposely didn't tell anyone what this day's blog assignment was because I felt like if I did it might cheapen the compliments. If I told someone what I was doing and then told them that their hair looks good or I like the color of their shirt, they'd probably just think that I said it for the blog. True, this experiment likely wouldn't have come along had it not been for the blog, which is a shame, but I planned on making the compliments as sincere as possible.
I considered trying to pay 200 compliments in honor of the number of days I'd been doing this, but again, for the aforementioned reasons, I didn't want to put a number on it. I wanted to be sincere and thoughtful and I didn't want anyone to know that I was doing it. With strangers, this was not a big deal.

Having it not feel awkward when I committed the random compliment, well, that's another story.
On my morning run, I passed a little girl with hair almost the same color as mine and I slowed down to tell her, "You have the prettiest hair."
The little girl seemed oblivious to me, and I could not blame her. I'd try to ignore some weird lady yelling at me while jogging past me and breathing heavily too. But the little girl's mother heard me and instructed the little girl to say, "Thank you."
I laughed that she was the first person that I complimented that day and it had not gone the way I envisioned it on many levels.

She didn't even hear the compliment, and is too young to even care. Plus, there was a part of me that wanted to kneel down and look at the girl in her eyes and say to her, "Listen, little one, I know being a redhead is a drag, especially at your age. People tell you they like your hair only because the color is so shocking to them they don't know what else to say. No one knows this better than me. It's probably going to get worse before it gets better. But your hair is cute. And so are you." That sort of seemed like a backhanded compliment, though, so I refrained. 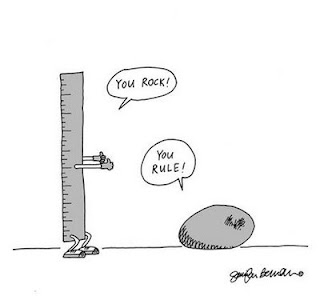 I picked up my dry-cleaning and was prepared to engage in a conversation with the woman behind the counter for the first time ever. Despite going to her for five years, and having her alter countless articles of clothing for me, we’ve probably only spoken 15 words to each other total. Not because either of us are rude, simply because we don’t speak the same language.

She handed me back my debit card and I looked her in the eye. "Thank you," I said, smiling, "You guys always do such a good job, and I appreciate it." She stared at me.

I stared back, smiling.

Then she nodded, grunted and turned around and walked away. Perhaps she, like me, has a difficult time accepting compliments. More likely, though, she had absolutely no idea what I’d just said.

When I got to work, the compliments were much easier to give out, because I had more time to look people in the eye and give them. Dropping a compliment into conversation with a colleague, though, was challenging only from a timing perspective.
"Ok, I will call our client and get to work on that. Thanks for what you’ve done so far. Loop me in on any emails moving forward. Oh and by the way, your hair looks good styled like that.”

And over the phone compliments were difficult too. Telling a colleague that I liked the sound of their voice could be both awkward AND creepy. But what else could I say when so many of the people that I deal with at work I do so over the phone?

I did have some success though.

I told Jackie that I loved her blue shirt and that it brought out the color of her eyes. It really did. Jeremy and Justin also were complimented about their shirts that day.
I reminded Mo about how generous he is and told him how much I appreciate that he edits my blog posts for me.
I told Emily that I was thankful for her friendship and support, especially over the last few months.
Amanda was praised, as she often is, for her outstanding outfit, and Jason got a sincere appreciation for always making me feel good about myself.
A woman that I don't know walked by my desk and I told her that I loved her belt. She kept walking, unsure, I think, about whether or not I was talking to her. When she did realize it, she spun around and hastily said, “Thanks.”
Again, I don’t think she was a rude person, I just think dropping compliments on people, especially strangers, catches them off guard.
When compliments weren't possible or seemed forced, I simply made it a point to speak kindly every opportunity I could. "Thank you," "I appreciate it," and, "You're the best” (this one is completely lame and generic, but sometimes it was all I had.)
At the end of the day, I realized this wasn't difficult to do. At. All. And this is coming from someone who hadn't eaten meat in four days.
In fact, I could count this day may have been a bust because I feel like I compliment people a lot. I don’t know that I ever attempted to compliment every single person that I spoke to in a day, so the sheer volume of compliments made this a challenge. But I tend to be a glass half-full kind of girl and when someone does something nice, or looks good, I don't have a problem praising them for it.
I'm not down with handing out empty compliments, but I decided that practicing the old southern adage of, "If you don't have anything nice to say, don't say anything at all," is a pretty nice thing to do.
Paying compliments is fun and it’s free, so make someone's day and give one out! Learning how to accept them, well, I still need some work on that.
By the way, Day 300 is July 24th. It's a Saturday and I would love your suggestions for things to do.
Posted by Stephanie Gallman at 9:00 AM