My boss Stacia has supported Project 29 to 30 from the start and often approaches me at my desk with ideas ranging from scary to hilarious.

In fact, during a work presentation about our new health care benefits, Stacia took my Blackberry from me and in a file dedicated to the blog, she began filling it with ideas: bikini wax, competitive eating contest, colonoscopy.

I'm starting to question if Stacia likes me.

One of her least scary suggestions was to be the Mystery Reader for her son's kindergarten class. I loved the idea but forgot about it for a few months. With the end of the year drawing nearer, I reached out to Stacia and asked if she would set it up for me. 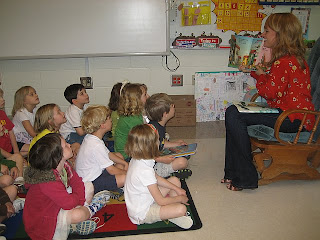 before was to read a story to a kindergarten class.
Ahead of Friday, I emailed her and asked her if I was supposed to choose the book, or if they would give me one when I arrived.

"No," she responded to my first question. "I'll bring you the books."

The next day, she stopped by my desk with two books (apparently the Mystery Reader reads two stories, not one), The Circus Ship and Michael Recycle.

She explained that after I'm done reading them, the books become a gift to the class on behalf of Grant.

"Oh," she said, as she turned to walk away, "You're going to want to read those ahead of time, because trust me, you do NOT want to fuck up in front of these kids."

I burst out laughing, certain that she was just kidding and that this dramatic advice was not for real.

Stacia was not laughing.

"I'm serious," she said. "They've likely read these stories before. They know what comes next. If you skip a page or screw up a word, they're gonna know."

And then it occurred to me, again, "They're 6-year olds! They're going to eat me alive."

I did as she told me and read both books twice. Once the night before and once the morning before I drove over to the school. I arrived 20 minutes early and sat in my car. Knowing my tendency to get nervous for no reason, I'm sure you won't be surprised to hear that I was super nervous. 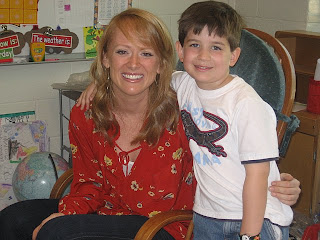 I even emailed Stacia and said, "I think I'm freaking out more than I was when I went sky-diving."

Finally I walked my weak knees up to the front of the school and rang the doorbell outside. I paused and mourned the days when it was safe and acceptable to walk right into an elementary school. Those days have since passed.

The receptionist let me in and asked me to sign in and then pointed me in the direction of the kindergarten class.

When I arrived in the class, I walked into a pandemonium of kids running around playing, laughing, yelling. It was like a scene out of the movie Kindergarten Cop before Mr. Kimball (aka Arnold Schwarzenegger) whipped those kids into shape. Nothing worse than what I would've expected from a kindergarten class, but nonetheless overwhelming for someone who deals with kids one at a time, if ever. The students were finishing up eating their snack and cleaning up the classroom, so there was a lot going on.

The teacher greeted me when I arrived, and I explained to her, after she asked me, my connection to Grant.

What I gathered based on my discussions with Stacia and my brief meeting with the teacher, is that that about the Mystery Reader is always someone related to one of the kids in the class. Moms, Dads, brothers, sisters, grandparensts, babysitters, all obvious choices for the job.

I wondered if I was the first student's parent's employee to make an appearance as the Mystery Reader. I wondered if the teacher thought that it was weird.

Grant, Stacia's son, and I had spent no more than 15 minutes together total our entire lives when he came into work last Christmas and we talked about dinosaurs. The entire encounter consisted of him telling me how much he knew, and him rolling his eyes and shaking his head at me over how little I knew. Then he reminded me that his mom was my boss. 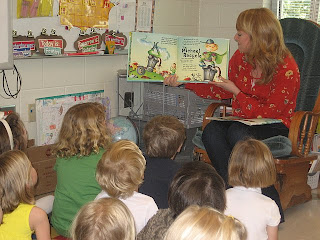 his teacher announced that the Mystery Reader was "related" to him, that he might freak, yell "Stranger Danger," and run out of the room or something.
The teacher instructed all of the students to sit on the carpet at the side of the room and once they were seated and quieted down, she introduced me as Miss Stephanie and said that, "Today's Mystery Reader was a friend . . .of . . .Grant's mom!"

When he heard his name, Grant jumped up in the center of the carpet and did a dance that I'd seen before many times; it's the same dance his mom does by my desk at least once a week when something goes well at work. Then he looked at his friends and said, "Ahhhh yeah!"

Apparently our little encounter about the dinosaurs had made an impression on him, or, more likely, when you're 6-years old, having something that the other kids don't have, even if it's a distant relationship with the day's Mystery Reader, is always a good thing.

Regardless of what sparked his reaction, I loved Grant immediately. And immensely.

I sat in the glider chair and looked at all of the precious faces of the class looking back at me. I didn't really have to work for their attention, which was surprising to me. They seemed instantly eager to hear what I had to say.

I asked them which book they wanted me to read first, and overwhelmingly the choice was The Circus Ship, a story about a ship carrying animals to a circus that gets caught in a rainstorm, displacing the animals.

The book mentioned Boston, which struck a chord with a couple of kids.

"My grandparents live in Boston!" one shouted out.

"I've been to Boston!," another one yelled.

I stopped myself from yelling back at them, "I'm a Boston Red Sox fan!"

Instead, I kept reading, letting them point out the hidden animals in the pictures.

When we read Michael Recycle, I thought it would open up a conversation about recycling and being green, but my message, if there was one, seemed to be lost on them.

I asked them, in my best kindergarten teacher voice, how they could help the environment.

After both stories had been read, the class asked me where I was from and Grant pointed to South Carolina on the map.

Then, just as they do with all of the Mystery Readers, all of the children came up, one by one, to shake my hand and introduce themselves. Most of them were shy, but sweet, extending their hands and telling me their names.

Some wanted to tell me that they had a sister or a brother, others what they did on spring break, or that they were going to the beach this summer.

Grant approached my chair and asked me if I was going to his older brother Bennett's class.

His eyes danced with excitement at this thought. The fact that he was getting a visit from me and his brother was not positively delighted him. And then he walked away. 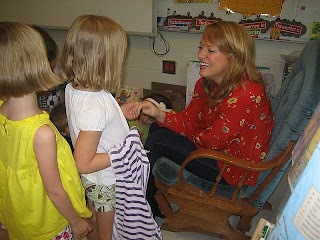 One of Grant's friends approached the chair, laughing before he ever spoke.

I looked at the teacher, confused.

"Oh yeah, that's the thing right now," she said, "They're all into being older than they really are."

I remember wanting to be older when I was six too, but why 15, I wondered. I held back from telling them how much I hated being 15.

Vaughn returned a minute later and said, "I meant I'm 19."

Olivia took my hand and told me she knew how to read.

I told her that was awesome and she said she's been reading since she was 3, before most of her classmates. And she reads books. A lot of them. Every night before she goes to sleep.

Alright, Olivia, I was impressed, but any more details about your reading habits and I'm going to think you're showing off.

Another kid approached my chair slowly. He grabbed my hand with purpose, looked me in the eyes and said, "Thank you so much for coming to our class to read The Circus Ship. It really was lovely."

He was so serious, so grateful, I couldn't help but laugh. He was definitely an old soul.

There was Grace, Copeland, Grady and Evergreen (no kidding), and even a little unfortunate girl who looked exactly like Vienna from the last season of the Bachelor.

After meeting everyone in the class, it was time for me to leave. The window of opportunity of these kids going from cute to insane was narrowing rapidly.

As I drove away, I thought about how I'm still not sure if I'm cut out to be a parent myself, but that I absolutely loved reading to these kids. I know procreating for my own amusement is not the way to go, but selfishly I'd consider having them just because they are so damn funny and I would get the biggest kick out of them everyday.

Maybe I should just be a teacher. Or a full time Mystery Reader.