On the third day of my vegetarian diet, and Day 199 of the blog, I made eggplant parmesan as the thing I've never done before. 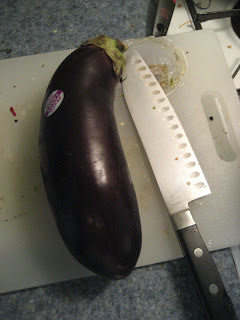 This is going to be short for many reasons, but most importantly because what really can I say about eggplant parmesan?
It seemed natural that I would attempt this dish as some point during the week. Isn't eggplant parmesan the go-to for vegetarians? Plus, I was distracted by the pretty purple color of it at the store, and hastily bought it, not realizing until later that like many of the foods that I bought for this experience, I had no idea what to do with it.
But dousing it with bread crumbs, spaghetti sauce and cheese sounded like a winner, so away I went.
I had no trouble making the recipe (I'm turning into quite a cook, if I do say so myself), and the end result was tasty. Not as good as it could've been since I opted to broil the breaded eggplant instead of fry it, but definitely worth making, and eating, again.

With no one to sample my handiwork, I was forced to eat the dish for several days, which did get boring, but helped me to achieve my week-long goal of staying meat-free. I really like eggplant, though I admit other than eggplant parm, I am at a loss as to what else to cook with it. And is it a fruit or a vegetable? It has seeds, so I'm not sure.
Please feel free to leave your suggestions and answers below. 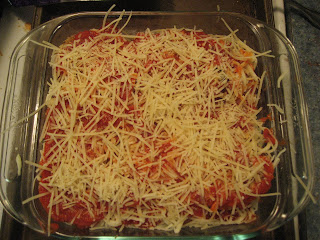 Posted by Stephanie Gallman at 3:00 PM