The morning of Day 335, Mark, Jen and I woke up at 7am to meet their running group for a three-mile run to the beach. 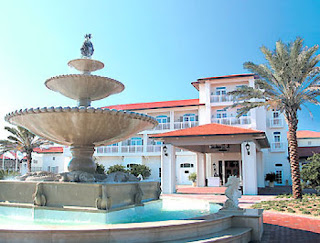 I'll admit, getting up early on a Saturday to jog is something that I wasn't all that thrilled about. It's also something that I never do in my regular life. I took it in stride (pun intended) and went along with this outing, adding, "exercising before noon on a weekend," to the list of things I'd never done before.

Plus Jen and Mark's running group is more than just a group of people to exercise with; the group consists of many of their friends they hang out with socially. And that was another reason I wanted to go.

The morning run was good, and perfect for the summertime since any later and it would've been too hot. Can't get much better than running through a golf course neighborhood to get to the beach. Plus, by 8am, the run was over, and we had the rest of the day to enjoy ourselves.

I wondered if I could start a running group in Atlanta with my friends. I'll bet I'd be much more likely to actually run if it meant I could use the time to catch up with them and hear about what's going on in their lives. Currently, my friends and I catch up at bars, drinking beer and eating fatty foods. 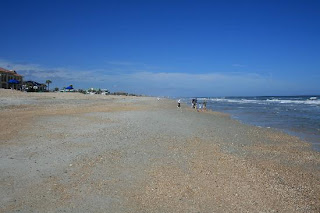 After our run we stopped for coffee before heading back to the house. Mark drove me through some of the nicest neighborhoods in Ponte Vedra Beach, showed me where he and Jen go to church and the Ponte Vedra Inn, a hot spot for tourists in the area.

We returned home and lounged for a bit, ate some bacon and eggs, and then decided to go to the beach despite the less-than-sunny temperatures. I couldn't come all this way and not hang out on the beach at least for a little bit.

Mark, Jen and I set up our chairs and enjoyed people watching and chatting about nothing in particular. We observed a middle-aged couple walking in front of us past our chairs. As they first approached on the left, they seemed to just be taking an innocent, slow stroll down the beach engaged in a deep conversation. Once they got closer, however, I couldn't help but notice that the woman was the only one talking. The man kept the same walking pace, but he looked straight ahead and never spoke a word t 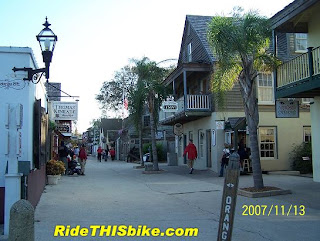 hat I could tell. I'm not even sure he was even nodding, or that he could hear what she was saying.

I wasn't the only one who noticed this couple. Mark and Jen and I laughed amongst ourselves, assuming the couple was in a fight and the wife was really letting him have it. But she wasn't really yelling, just speaking intently; neither of them appeared to be unhappy, the conversation just seemed unbalanced.

A short time later, the couple walked in front of us again, and it was the same thing. The man stared straight ahead, the woman barely came up for air chatting his ears off.

"Oh man," I thought to myself, "Please don't ever let me be in a relationship like that."

I am a talker for sure, but I think that I would at least recognize (and stop) if I ever noticed I was having a conversation with someone who wasn't listening or responding at all. Mark, Jen and I started brainstorming what could possibly be going on with them.

"Maybe they're having problems in their marriage," someone threw out. Clearly. And the problem is the wife talks to much. 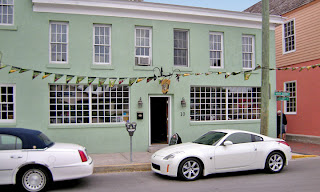 "Maybe he's deaf," someone else said. For his sake, I hoped that he was. She would not shut the hell up.

Whatever it us, we were amused. We were further amused when we packed up our belongings to head back to the car and saw the couple again, this time sitting in beach chairs under an umbrella. He had his chair tilted back. Hers was upright. She was still talking.

We stopped for frozen yogurt on the way home, at a place similar to Yoforia, because I was on vacation and that's what I do when I'm out of town: I eat.

The plan for Saturday night was for us to meet back up with Sean and Julie and our friend Scott (who was in town for work) and go to St. Augustine, the nation's oldest city, and popular tourist destination north of Jacksonville. I'll save you a history lesson because truly I don't know it. I'll also save you too many details about how we almost didn't leave Mark and Jen's house after discovering that Footloose was on television. 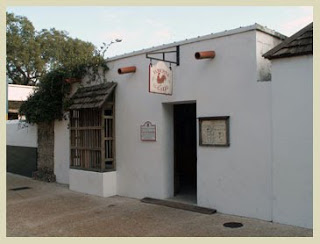 But St. Augustine is where the Fountain of Youth is, and since I was already starting to notice my almost-30 skin looking a little tired and wrinkled, what better place to go? Only on our way into town, Mark and Jen drove right past it. They didn't even slow down.

"What about the Fountain of Youth?," I asked, surprised that the sign leading to the fountain was right across the street from a Pizza Hut and looked every bit as cheesy as something I might find in Myrtle Beach.

Mark and Jen said the Fountain is less than impressive, and not worth the stop. Still, I was looking forward to taking a dip and stopping time, keeping my face looking 29 forever. But I took their word for it, and decided it push came to shove, I'd just have to resort to plastic surgery. 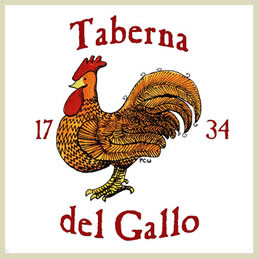 We parked our cars and hopped out with and started what Jen had already decided would be a St. Augustine pub crawl. That was the big thing that I did on Day 335 that I'd never done before.

On our walk to the first bar, I looked around and noticed how truly lovely St. Augustine is. The cobblestone streets, old buildings and palm trees made me feel like I was in Charleston, only with Spanish-influenced architecture.

We started our crawl at J.P. Henley's, a bar that claims to have the most beers on draft than any other place in St. Augustine. I believe it; I had a very hard time deciding what to order.

After a couple of beers there, we took off for our next destination. The walk during the pub crawl was one of my favorite parts of the evening. There were lots of people walking around and beautiful buildings and historical markers along the way. Our next stop was Taberna del Gallo (Tavern of the Rooster).

Taberna del Gallo is a 1740's Spanish Tavern. The waiters and bartenders dress in period costumes. We sat at a table outside and ordered drinks while Jen went on a search for a game that she said I must play while I was there. One of the waiters, dressed in knickers and a vest, located the game and brought it to our table.

The game, "Shut the Box," (I'm serious, that's what it's called) requires a pair of dice and a box with numbered tiles. The tiles, numbered 1 through 12, start standing up. She told me to roll the dice, so I did. I rolled an, "8," meaning that I then had to flip tiles over that equal the number, "8." Jen said I could flip a the "7" and the 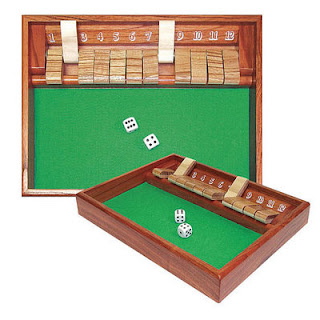 "1" or a "5" and the "3." The goal of the game, is to, "Shut the Box," and end with all of the tiles turned down, or come as close And my turn ended when I rolled the dice and could no longer flip down any tiles. The game was fun, and moved fast, and who doesn't love yelling, "Shut the Box," loudly in a restaurant full of tourists?

After we left Taberna del Gallo, we headed to dinner at Columbia, a restaurant specializing in Spanish cuisine and, according to Mark and Jen, very tasty sangria.

The restaurant was bustling with people and noise; dinner lasted several hours. I'm sure it was the pub crawl that made us think we were so hilarious, but we laughed a lot at that dinner. If I had been at any other table, I probably would've found our group obnoxious. We laughed at nothing, and everything.

The highlight of dinner, besides the food and drinks was definitely our peculiar waiter who unabashedly attempted to "up sell" us bottled waters and appetizers on in hopes to win a contest between the servers at all of the Columbia restaurants in Florida. I've been a waitress and I've participated in these ridiculous contests, so I felt for the guy. He just laid it out there. I've never seen someone work so hard for what I'm sure was nothing more than a $50 gift card to Best Buy and to be so shameless about it. He wanted to win this contest, and he didn't care if he put us on the spot and made us feel uncomfortable. We must've not cared all that much either, though, because we happily satisfied him and ordered bottled waters and appetizers, just like he'd asked us too. 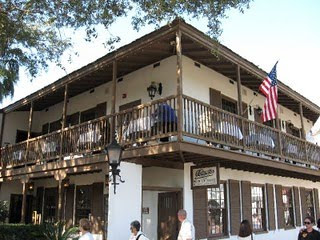 I left full. And happy. But mostly full.

We stopped in Cellar 6, another bar/dance club for one more drink. I showcased some of my moves on the dance floor until I realized that the guy that I was dancing with was videotaping the whole thing and live streaming it on the web. I asked several times what the web cam was for, and when he refused to give me a good answer, I left the dance floor.

Shortly thereafter, we left St. Augustine and headed back to Ponte Vedra to Mark and Jen's. I was done. We were tired. It probably wasn't even midnight.

Again, another full day (and night) of activity in Jacksonville. That's what happens when you get up at 7am on a Saturday, I guess. I should try it more often.
Posted by Stephanie Gallman at 4:55 PM