Mark, Jen and I slept late on Day 336 and enjoyed a very relaxing morning at their house before I had to head back to Atlanta.

We ate bacon and eggs, and watched Away We

Go, a beautiful film starring Maya Rudolph and John Krasinski about a quirky couple trying to find a place they can call home to raise their baby. The movie was sweet and it made me feel all warm and fuzzy inside.

Before I got on the road, we met Sean and Julie once again for a late lunch/early dinner at Salt Life. When we walked in, I recognized the logo on the wall. I'd seen the same one on bumper stickers all over town. I assumed this restaurant must be a Jacksonville favorite, until Mark explained to me that "Salt Life," was a campaign for beach enthusiasts that was later turned into a restaurant. The bumper stickers came first, then the restaurant. Weird.

After another round of frozen yogurt, I said my good-byes and began the trek back to Atlanta. On the way home, I realized I hadn't done anything for real that I'd never done before. I mean, the movie and the restaurant technically could've counted, but both seemed a little lame, so when I got to south Georgia on I-75, I decided to do something else that I'd always wanted to do. 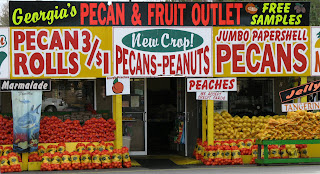 I assumed, based on the tacky decor covering these monstrosities lining the highway, that they'd be full of chintzy souvenirs and crappy produce. But I found the exact opposite. There were rows and rows of fresh produce, homemade jams and salsas. None of it was particularly cheap, in quality or in price.

The man tried to sell me pralines and peanut brittle, and some peach gummy candy that looked a little suspect. I thanked him, but politely declined.

I opted, instead, for a $10 enormous bag of delicious Georgia peaches; far too many for a single person to consume in a reasonable amount of time, but overall a great purchase and an enlightening experience. This stop was worth it, and will not be my last.
Posted by Stephanie Gallman at 2:40 PM