Day 331: Chicken Soup for my Throat

On Day 331, I could feel myself getting sick, and since I was headed into an out of town trip that weekend, I decided to make some homemade chicken noodle soup as the thing that I've never done before. 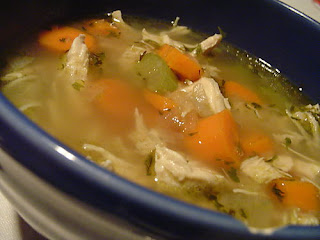 The only thing I can say about this challenge is that there is a reason why chicken noodle soup comes in a can for easy preparation and consumption. Because if you are like me, and the only reason that you eat chicken noodle soup is because you are sick, the last thing that you want to do, or should do, is try and make it yourself.
Not because making it is particularly difficult, but because grocery stores, chopping vegetables, measuring spices -- none of these things are meant for sick people.
But I did it. I went to the store, I chopped vegetables, and I measured spices. I finished the soup. And then I stared at it for ten minutes trying to figure out why it looked so odd. In my sickly haze I forgot to put the noodles in it.

Sick people have no business cooking. Chicken noodle soup requires noodles. And I forgot them.
Even with the noodles, my soup was just depressing. Flavorless. But unlike other cooking disasters I've had in the past, I blame this on the fact that this chicken noodle soup lacked two very important ingredients: love and sympathy. Every time someone else made me soup, it always had a healthy amount of both.

I think the broth still did the trick though, and I was on my way to recovery.
Posted by Stephanie Gallman at 10:00 AM