Day 330's thing I've never done before was to see singers David Gray and Ray Lamontagne in concert. The David Gray half of the show was the new thing, since I'd seen Ray before.

My friend Dayton organized this outing and advertised it as a girls night out. I was down, even though the only girl in the group that I knew was her.

We met at Dayton's, and then I drove all four of us over to Chastain Amphitheatre, one of my most favorite places to see live music in Atlanta. We exchanged pleasantries on the way over, and I got to know Sarah and Brooke, the other girls, all while keeping an eye out for a place to park. Because I had to work late, and didn't have a pass, I knew we'd be in a tight spot, bu 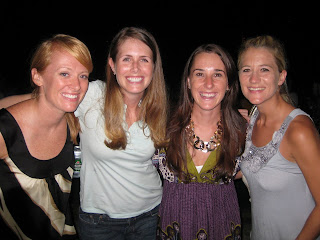 t we'd circled the place a few times and were still coming up short.

I'd resolved to just find a place and walk, but clearly that was not going to sit right with the mom squad, and the next thing I know, all three of them are yelling from the back seat of the car that I needed to pull into the parking lot that we didn't have a pass for and try and pay off the attendant for parking.

"What? Really? Are you serious?," I asked, rapid-fire style, as if one of them had asked me to smoke crack in a dark alley way. I mean, I'll make irresponsible decisions all day long, but for some reason trying to scam the parking lot attendant was just a little too much for me.

Which is weird on many levels, but especially because I absolutely hate paying for parking. All the time. Always. I should've been happy about ripping them off.

By they time they could answer that yes, they were serious, I had already missed my opportunity to turn. I kept going, hopeful that we would find another option. We did not. So at their insistence, I turned around and headed back to the lot.

"Should I pull in?," I asked my car mates, my voice uncertain.

Dayton, sensing that I was chickening out, said, "Yes. I'll do it." She pulled a 20 dollar bill out of her purse. I was impressed. Becoming a mother of two had not impaired her ability to be a bad ass.

I don't know when I got so old and lame that paying off a parking attendant got to be, "bad ass," but here we were. Seriously, why am I this lame? It's parking.

Day 330's thing I've also never done before was to pay off a parking attendant, which in retrospect wasn't even that big of a deal because the concert had already started and I think he would've let us park there even if we weren't flashing cash in his face.

Just like nearly every concert I've ever attended at Chastain, there were a plethora attractive women and men. Always on the lookout for water man, I hesitated to get too excited -- I had to assume that any man at this concert was probably there with a girl. In most cases I was right.

Except of course for the one gem who sat in the empty seats next to me towards the end of the concert. He and his friends (another guy and girl) were engaging in a loud, drunk conversation beside me. I turned to my left to see three of the most unlikely David Gray concert-goers I'd ever seen. I stared at them for a solid 30 seconds before locking eyes with the girl in the group.
"Don't you want a fucking piece of this shit?," the girl said to me, motioning to the guy, who was wearing an Ed Hardy shirt. She was scary. He was terrible.

I don't speak, "freak," but I think she meant to ask me if I'd like to hang out/befriend/make out with her friend.

I mean of all the eligible bachelors in the place, I'm not quite sure how this one finds the vacant seat next to me. It's truly remarkable. What vibe am I putting out?

The concert was highly entertaining and super laid back- both Ray Lamontagne (who we arrived late for but it was okay because I had already seen him before) and David Gray are so talented and their performances were effortless. This was a sit in your seat and tap your foot kind of concert, which was fine by me; and yes, I confess, there were times when we may have been those people using the concert as background music to our endless chatter. I was beside myself about Hollis' writing class and I wanted to tell Dayton all about it. And Sarah rattled off a list of single guys she was willing and ready to set me up with, so there was that.

When I was listening to the music, I realized I knew way more Ray Lamontagne songs then I did David Gray ones. And surprising to me, David Gray is one of those singers who is British, but whose accent is virtually unrecognizable when he sings. I was hoping that Ray and David might come out at the end of the evening and sing together, but no such luck.

But overall, a Monday night concert success.
Posted by Stephanie Gallman at 10:30 AM