On Day 361, I arrived in Charleston to kick off my birthday weekend, and went straight to my friend Adam's house. He'd promised to take me shrimping as the thing I'd never done before since Day 294 when we overslept and quite literally missed the shrimp boat the first time we'd tried to go.

That day turned out to be a lot of fun. Adam and spent the day (ALL day) brunching instead, hitting various Charleston spots that I'd never been before. But I was still very disappointed that I'd blown my chance to go shrimping.

He wasn't sure if he'd be able to make the shrimp boat happen again, but Adam s 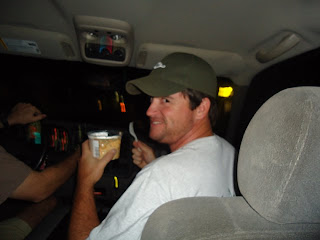 aid when I came back to town, we could take his own boat and go shrimping ourselves. That sounded like a perfect way to kick off my birthday weekend. I arrived at Adam's house right as the sun was setting, and we, along with Adam's roommate Roy, jumped in his truck and headed to the boat ramp.

I assumed that we'd be on the boat catching shrimp for a couple of hours and that we'd have plenty of time to head out on the town afterward. In fact, I liked the idea of myself wearing a fishing shirt and grabbing a couple of well-deserved beers following a successful evening out on the water. But Adam informed me, when we stopped at Harris Teeter to buy beer and something for dinner, that shrimping was an all-evening affair.

"There won't be any bars open when we finish up," Adam said, as he grabbed a bucket of chicken and a container of macaroni and cheese (sadly the only picture saved from the lost camera is that of Adam and the macaroni).

Clearly, I had absolutely no idea what we were in for.

By the time we loaded all of the tools, coolers and put the boat in the water, it was completely dark outside. A strange time to be headed out on the water, but the night could not have been more beautiful. The moon was full and bright and it hung over the harbor as if someone had painted it there for us. The light it gave was more than enough to guide us where we wanted to go and I wished that all nights could be so lovely, and that all of my evenings would begin on a boat in Shem Creek.

We all cracked our first beer and basked in the moon's glow for about five minutes. And then Adam said it was time to get to work.

Work meant making the shrimp bait patties, possibly the worst part of shrimping. Shrimp bait patties are made of powdered clay and shrimp meal. Adam had already mixed the dry ingredients in a painter's bucket and smiling the whole time, he dipped a few cup fulls of salt water and added them to the mixture, creating a thick, gooey, paste-like substance that stunk really bad. Adam's smile went from charming to sinister as he mixed, darting his eyes from me to Roy then back to me. He knew that I was eager to be involved in this process, and that I was willing to do whatever needed to be done. But he knew sticking my hands in this stinky mush would completely disgust me. And it did.

I didn't hesitate, though, and I rolled up my sleeves and got to work. While Roy and I made the patties, that looked like hamburgers when we were done, Adam scoped out a place for us to set up our markers and drop our bait. If there is any kind of rhyme or reason to choosing a place to shrimp, I couldn't tell. Adam merely chose an area that was far away from any other shrimpers.

When we had our area, we had to mark where we intended to drop our bait, so as Adam drove the boat slowly, Roy stuck the equivalent of a PVC pipe (or maybe it was PVC pipe) into th 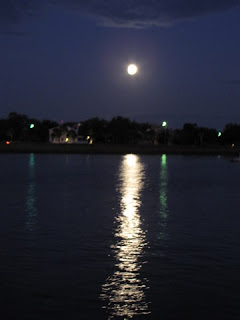 e ocean floor every 10 to 20 feet. Ideally, the 10 poles should all end up in a straight line, only that didn't exactly happen. We were close enough, though, so we decided to go with it. Plus, the first one I tried to stake barely even stuck in the ground at all, so the fact that I was able to get it to stay was good enough for me.

Once the stakes were in the ground, we returned the boat to the first pole and we dropped a couple of shrimp bait patties in front of it, placing them gently into the water and letting them fall.

We hadn't caught a single shrimp and I was tired. I like activities that I can show up and they happen, but shrimping, I learned, requires a great deal of preparation and quite a bit of patience.

Once the bait was set, Roy took over as the driver of the boat, and Adam, wearing fishing waders, stood on the stern with a net. Driving slowly, Roy approached the first pole; Adam, using both hands and his mouth, shook the net out and cast it open. Almost as quickly as he dropped it in the water, he started to pull it back in with both hands.

I watched nervously, and jumped up from my seat, wanting to assist but not exactly sure how, or in what way to do so. Adam said nothing and didn't indicate that he needed any help, and as Roy drove the boat slowly away from the pole, he pulled the net into the boat and lifted it over the empty cooler in front of me. There were about a dozen shrimp inside.

"Alright!," I yelled. "Good job!" No, it was hardly the bounty I'd seen shrimpers get on big shrimp boats, but still, it was shrimp! That we (well, Adam) had caught!

Roy and Adam were unimpressed. They went on to tell me that they'd been out a few nights before and each net full had yielded 20, maybe 30 shrimp at a time. They filled their cooler in a couple of hours.

I loved that shrimping was something that these guys did often, and filed that fact under, "Reasons why living at the beach is way cooler than living in the city."

Roy turned the boat around, and went to the second pole and Adam cast the net again, the second time yielding just five or six shri 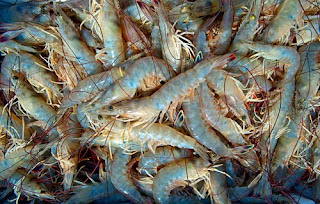 mp. My role in the process became to pick up the little critters when they bounced out of the cooler and to throw any fish that may have ended up inside our net back into the ocean. The job sounds lame, but it was right up my alley and I only managed to get pinched a handful of times before I took Adam's advice and wore gloves.

There wasn't a whole lot of conversation throughout the process, much to my dismay, and I was the only one really drinking beers at all. Roy, as the driver, had to be focused on where he was going at all times. Adam was under a lot of physical stress because the net was heavy and for the most part the boat was in constant motion. If we'd stopped to take a break between each cast, we would've been out there for hours. Shrimping is hardly the kick your feet up and drink beers kind of outing. It's hard work.

At one point, Roy could tell I was really studying what was happening around me, and he spoke up.

"So, Gallman, how are you going to write this?," Roy asked me. "Will you say I, 'maneuvered the boat with pinpoint accuracy and Adam cast the net like it was an extension of himself?'"

I laughed. Those weren't the words I would've come up with, but I certainly couldn't think of a more accurate way to describe these two shrimping experts. 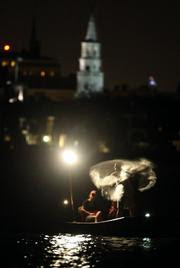 I couldn't let the night end without at least trying to cast the shrimping net, so when Adam paused for a well-deserved, much-needed break, I stood on the stern and tried to copy exactly what he did. My cast was not at all an extension of myself, more like an ugly toss, but I managed to snag a few shrimp. I only did it twice and I was exhausted. No wonder there wasn't a lot of chatter coming from him.

It took us several rounds (much longer than it had taken them in the past), but after several hours, we nearly filled a 50 quart cooler with shrimp for the Lowcountry boil I'd planned for the weekend. Adam was right, by the time we got back to the ramp, it was after two in the morning, and there was still work to be done. The three of us sat around the cooler and pulled the heads off the shrimp and threw them in the water. Another not-so-pleasant but necessary part of shrimping.

For all it's unpleasantness, the entire evening was the opposite. A perfect evening in my most favorite city catching my dinner. Not too shabby.
Posted by Stephanie Gallman at 1:00 PM