I had big plans to go to a pole dancing/strip tease class on Day 354. It was something I'd put on the list from the start of Project 29 to 30. Unfortunately, despite my friends all having loose morals (kidding . . . kind of), I had a hard time getting anyone to come on board with this one. Perhaps they were embarrassed, perhaps they were busy (it was Thursday), or perhaps this was God's way of saying, "You shouldn't be stripping for anyone, even if it's for exercise."

Melanie said she was up for hanging out, but that she would rather do so at a restaurant she had a Groupon for. So I made going to Einstein's on Juniper Street Day 354's thing I've never done before. 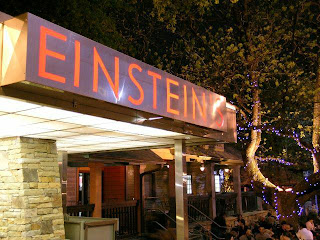 I know, not necessarily groundbreaking entry here, but after Day 353, I deserved a break. And while parking the car across from the restaurant, I was introduced to a whole subculture of Atlanta I never knew about -- that being, the tight-dress, high heel wearing crowd who stands out in line to get into dance clubs on a Thursday. I'm not one of these people, ever, so it was hard for me to imagine that such a crew came out to get down on a weekday.

The meal at Einstein's was good, but, as Yaya would say, it was, "nothing to write home about." The patio was nice and it was fun catching up with Melanie. Knowing I'd have difficulty cranking out an entry about a new restaurant, she and I tried to up the ante a bit and send a drink and my phone number to a good-looking guy at another table. And then we realized that he was definitely dating the terrible girl that was sitting beside him.

Bummer.
Posted by Stephanie Gallman at 11:08 AM