Music, especially live music, is one of my first loves in life, so it's no surprise that a lot of my firsts in my 29th year have happened in the context of a concert or a music festival of some sort.

What has surprised me, and disappointed me terribly, has been my inability to personally excel musically. With so much good taste in music, shouldn't it come easily to me? So far, I'd pulled off playing a song on a banjo and singing a song with a band, but both efforts were bad. Scary bad. 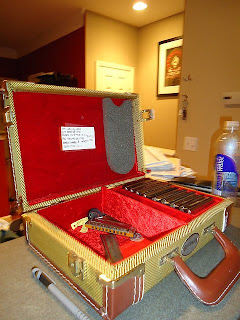 With the help of my friend Andrew, who himself is an excellent musician, I hoped to change all of that, when he taught me how to play the harmonica as Day 360's thing I've never done before.

Andrew and I had both hoped that this experience would come about more organically. We'd be out having a couple of beers and one of us would suggest a jam session and Viola! Time for a harmonica lesson.

But time was not on our side, so we planned what time we were going to meet and I went to his house after work. Andrew owns several harmonicas, and even has a case where he keeps them. The only harmonicas I'd ever seen were haphazardly tossed into junk drawers, so I knew these harmonicas were special. He placed the case on the bar in front of me, and I opened it gingerly, and picked up one of the shiny harmonicas as if it was a porcelain doll, certain that this was the instrument that would lead me to musical success once and for all. Give me an hour, I thought, and I'll be playing the blues.

"Nobody calls it a harmonica." 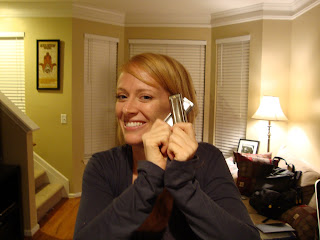 I was still staring at the harmonica in my hand, but his words caught me caught me by surprised. I looked up and stared at him.

"Yeah," he said, recognizing my embarrassment. "It's called a blues harp."

Only minutes into our lesson, and I'd committed a sin as glaring as wearing an artist's concert t-shirt to the artist's concert. I started to question him, "But why?," but I stopped. If he says, "blues harp," he probably knows what he's talking about.

Suddenly this instrument that I'd once associated with honky tonks and college bars felt a whole lot fancier.

Andrew had a blues harp of his own and started the lesson by showing me how I was supposed to position my mouth. Since I'm right handed, I was to hold the harp in between my right thumb and index finger and then cup my left hand over the backside.

Anyone can pick up a blues harp and blow air and make a sound, Andrew said. It's true, I'd done it plenty of times before. But to actually, "play" a blues harp requires blowing, or sucking, air through the individual holes.

"It's weird that you can suck on it," I said. As the words came out of my mouth, I regretted them.

I laughed like a 13-year old boy in sex education class as Andrew ignored my comment and went on to introduce me to words like, "blow note" and "bending." I was trying to pay attention, but I was easily distracted by the vocabulary associated with the instrument. 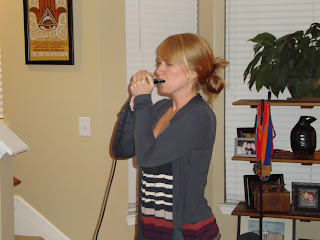 "All of this blowing and sucking, playing the blues harp is dirty," I continued.

Andrew humored me for a while with the inappropriate commentary, and we shared some laughs, but time was ticking, and soon we had to get down to business. Like Donald and the banjo, Andrew started by playing me the song that I was going to play, and then writing out the notes out on a piece of paper for me to read from. He showed me exactly where those holes were on the blues harp and told me when to blow and when to suck.

I didn't know the name of the song (Andrew emailed me to tell me it's "Mannish Boy" by Muddy Waters), but I recognized it. The sequence was probably the most popular blues sequence I'd ever heard. Da da da dah dun. That's it. How hard could it be?

Very hard, in fact. All jokes aside, pursing my lips the right way and finding the exact hole to blow into was difficult. I was all over the place.

The second time we filmed, I took my hair down, as if that would help. I found the beat, barely, but managed every time to miss the first blues harp sequence in the song. I got the notes right (for the most part) the second time around, but it was hardly impressive. I played so badly, even Andrew's dog Dexter ran upstairs to get away from the noise.

Besides my own music shortcomings, I decided to also blame my performances on the video camera. Every time Andrew turned it on, I completely choked. When we were just messing around, and I was relaxed, I managed to nail the five notes (just five notes) several times. Jessica, (Andrew's then girlfriend, now fiance) came home from drinks with her friends, I played for her what I'd learned and she said I sounded good. I'm pretty sure she had a lot of drinks.

Ever reluctant to turn 30, I thought at the very least my own anxieties about my birthday would've inspired me on the blues harp, but I guess I'm destined to leave my twenties with absolutely no success in the music department.

Unless you count concert-attending, of course. I had a lot of success there.
Posted by Stephanie Gallman at 11:42 AM

Email ThisBlogThis!Share to TwitterShare to FacebookShare to Pinterest
Labels: Andrew I., Jessica W.