Day 356: Black and Tans and Other Stuff

My friend (and new neighbor) Andrew called me the morning of Day 356 to see if I wanted to walk to nearby East Atlanta Village to see our friend Jarrett's band perform at a festival. I had a list of things to accomplish that day, but I knew nothing was going to happen without first getting a cup of coffee, so I agreed.

Jarrett's band, Animal & the Evolvers, put on a riveting performance to a small but spirited group. Their song, "Love is in the Air at the Indy Zoo," was epic, and since I'd never heard them before, technically that is the first thing I did on Day 356 that I'd never done before.

I really had no intentions of spending all 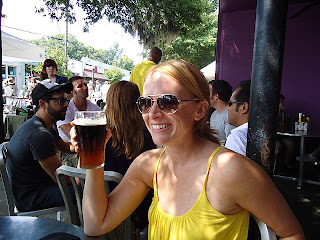 afternoon in East Atlanta. Seriously, I didn't. But Day 356 was one of those days where I just decided to go with the flow. I had nowhere to be, so why not stay and have a beer in the middle of the beautiful day?

So I did, and we all headed to the EARL, where I drank my first Black and Tan, the second thing on Day 356 that I'd never done before. A Black and Tan is a mix of two beers, usually a pale ale like Bass and a stout or a porter like Guinness.

I'd already tried a Guinness, and about a dozen other drinks, for the blog, so adding another wasn't too far out of my comfort level. When the waitress brought me the pint, I was surprised to see that the Guinness floats to the top of a Black and Tan, and the Bass sinks. Based on the heaviness of a Guinness, I guess I thought the opposite would occur.

I took a sip and further proved that there aren't many beers, or mixture of beers, out there that I don't like. I can't really explain what it tastes like, because I'm terrible at that; it tastes like beer. Heavier than a pale ale, not as heavy as a stout. I had to assume, based on this experience and after having tried a black velvet, that I most enjoy a Guinness when it's mixed with something else. 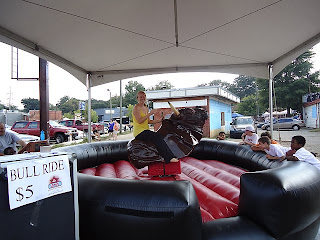 After a few beers, we decided to walk down the street to grab some food at Midway Pub. On the way, we saw a mechanical bull ride. And naturally, everyone that I was with, after hearing about the blog, suggested that I ride it.

I'm unsure whether or not this is the third thing I did on Day 356 that I'd never done before. I went to Wild Bill's years ago for a bachelorette party and hilariously witnessed my friends taking turns riding the mechanical bull. I'd like to think that I would've joined in the fun, but I can't remember if I did. Isn't riding a mechanical bull something I should remember for life?

So, maybe that's where the new thing will emerge here. Andrew insisted that I climb aboard, if not for the blog, then for his own amusement. And I took a mechanical bull ride that I will never forget. 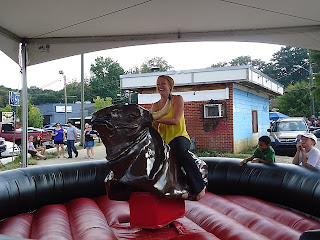 longer in control. Plus, perhaps I've seen too many bad movies, but I associate riding a mechanical bull with women arching their backs in an overtly sexual manner and I felt extremely uncomfortable from the start.

The ride operator talked like a high school dance D.J. and gave his own play by play.

"Do you wanna go fasterrrrrrrrr?"

The bull spun around slowly at first and bucked only lightly. But so it goes with mechanical bulls, the longer I stayed on, the more difficult and the faster it went. I was nervous, embarrassed and physically exhausted after only a few minutes.

I didn't last very long on the bull. The moment I thought I was going to have to arch my back to stay on was the very moment that I gave in. When I got knocked off the bull, and landed on the trampoline below, I noticed a group of kids hanging over the side of the "bull ring" laughing hysterically. I didn't mind; my friends and I were all laughing too.

As I tried to garner the momentum to stand up and get out of the ring, one of the kids that was laughing leaned over the edge and aggressively yelled at me, "GOD YOU SUCK!" 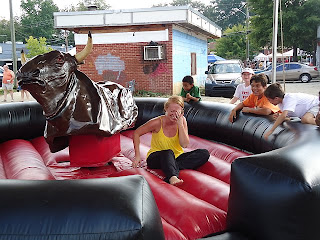 I immediately stopped laughing and looked around to see what caused this insane preteen to flip his asshole switch and be so hateful. In the span of five minutes, I went from feeling much younger than 30-years old, wasting away my Saturday and riding a mechanical bull to feeling much older, wanting to grab this little punk by the ears and hand deliver him to his parents.

It was a strange ending to an unexpected and awesome day of saying, "yes," to whatever adventure came my way. A day when young Stephanie gave old Stephanie the middle finger and said, "Whatever chores you had to take care of can wait, now is the time to have fun."

And I did.
Posted by Stephanie Gallman at 12:49 PM

Email ThisBlogThis!Share to TwitterShare to FacebookShare to Pinterest
Labels: Andrew I., Jarrett