More than 300 days into Project 29 to 30, and I'd started to notice that blog friends eager to suggest things for me to write about usually fall into one of three categories:

a. The Supporter: "I'm so proud of the journey you are taking and I want to be a part of it. Let's do something new together. And, of course, tag me in the blog."

b. The Teacher: "I know how to do this thing you've never done before. Let me teach you so you can then tag me in the blog."

c. The Wicked Puppeteer: "I support what you're doing, and I get a kick out of reading it, but I really want to make you look like an idiot doing something you've never done before, so I'm going to suggest the most bizarre thing I can think of so that everyone will laugh at you and you can tag me in the blog." 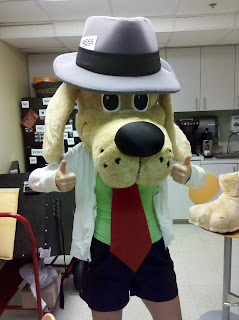 Jason emailed me several months before Day 327 and confessed he'd wasted a couple of hours at work reading Project 29 to 30. His remarks were music to my ears and I thanked him profusely. During our email exchange, he included a list of things I should try before the year was over.
Among his suggestions:

Open a lemonade stand (Um, awesome, but used to rock plenty of these in my youth.)

Proofread a dissertation (Yikes, no thank you.)

Dress up in a mascot uniform. (Brilliant. Freaking brilliant.)

Only when? Where? How? Under what logical context could that ever happen?

"If you can help make that happen, I'm totally in," was all that I could think of to say, certain that Jason's response wouldn't involve him telling me that since I'd left the office where he and I used to work together, the department had created a mascot, "Scoop," that comes out periodically to do community outreach for kids.

And, he continued, there was an event the following day that was in need of a friend.

The next few emails incited a roller coaster of emotions.

First I was high thinking about dressing up like a mascot.

Then I was low, certain that it would never happen.

Then I was high again that Jason had the very mascot uniform I needed.

Then I was low because the event he'd suggested conflicted with my job and there was no way I could arrange it on such short notice.

And then I was high, because, Jason told me that dates needing "Scoop" appearances come around often. In fact, there is one in August at the Atlanta Pubic Library. 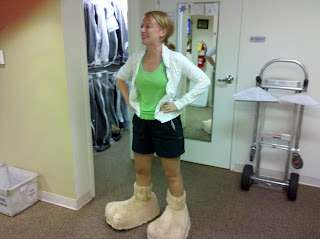 Day 327's thing I've never done before was to dress up like a mascot; a furry, as they are known in other circles.

In order to pull this off, I had to reschedule some things at work so that I could come in later. This appearance was right in the middle of the day. If you've been around since the beginning of Project 29 to 30, you know this is not the first time I've rearranged my work schedule for a blog activity. I'd also done so to go speed Dating in the Dark and play Bingo at the Knights of Columbus. This latest example, dressing up in a dog costume, had me laughing, and desperately wanting to reassess my social life.

There isn't a whole lot of skill involved in dressing up like a mascot, yet for some reason, when the day came for me to actually do it, I was nervous. There had to be more to it than slipping my feet and hands into over sized gloves and feet, right? But what? It's not a sporting event; there would be no need for any flips or tricks. Jason assured me when I saw him that the number one rule of any mascot is that there is absolutely no talking. And then I understood why there was reason to be nervous. Talking happens to be what I do best!

But, I considered, taking on the role of, "Scoop, the News Hound," would guarantee that I'd be the center of attention in room full of children for at least 20 minutes, so there was that.

Only this wasn't the kind of attention I was necessarily seeking.

When I showed up at Jason's office, he introduced me to Kimberly, who would be driving us over to the Atlanta Public Library and leading the presentation. She was sweet and energetic, exactly what this kind of job requires. We drove over to the library, and gave the venue a once-over, figuring out where we were supposed to take ourselves and the costume.

We were careful not to let anyone see us carrying the trunk, certain that the only thing that could possibly freak a kid out more than an over sized dog acting like a reporter is seeing that dog suit stuffed in a trunk 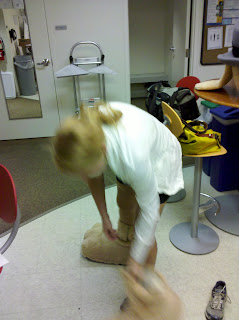 We hurried back to a room where Kimberly explained how the event was going to go down. She would do her presentation and then she would announce that she was going to go get her friend. And then she'd come back and escort me out to the children.

I took a deep breath.

I quickly realized that there were other obstacles standing in the way of my success.

First of all, the average temperature inside the Scoop uniform is 150 degrees. Luckily, Jason prepared me for the heat and told me to dress appropriately. I did, wearing running shorts and a tank top and no makeup. It didn't matter. I could've been stark naked and still would've sweated profusely.

Second of all, Scoop sees the world through the mesh that covers his mouth. Therefore, Scoop hardly sees anything at all. Kimberly offering to be my escort wasn't her being nice to me because I was new at it; it's absolutely necessary to have a leader.

When it was show time, Kimberly came back to the room, where I was contemplating life's big questions like what jeans I should wear to meet my friends later that night.

I nodded, forgetting that I was wearing an over-sized dog head. My neck nearly snapped, and the Scoop head shook all around. 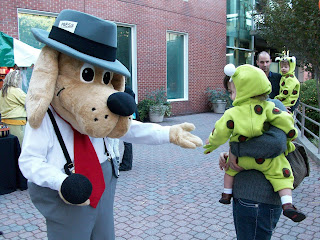 And then she put her index finger over her mouth elementary school teacher style reminding me that I wasn't supposed to talk as she led me through the door.

We had to walk in between shelves of books in order to greet the children. I was like a giant drunk toddler learning how to walk for the first time. Scoop's feet are huge and only with great effort was I able to move forward, and even when I did, I was all over the place. She'd tell me to go right and I went left. She'd say, "Watch out for that," as I was running into it. I was, simply, a complete disaster.

Everything that a mascot does has to be large and overly animated. Every wave, every thumbs-up would have be bigger than a normal human's. Whereas Steph might wave at someone by bending at the elbow and moving her hand left and right a few inches, Scoop waves by lifting his shoulder and Miss America style waving in big sweeping motions. So far the only big motion I'd managed was picking up my foot and trying, albeit unsuccessfully, to put it in front of me.

When I got to the kids, after a walk that felt like it lasted half an hour (but probably only lasted five minutes), their reaction was underwhelming.

I was expecting, and hoping for, a complete freak out a la Mickey Mouse at Disney World. I wanted kids to squeal with delight, cower in fear, or take off running towards me to tackle me. But there was none of that.

If they thought that Scoop was cool, they weren't letting me know it. These children were controlled, polite, timid even, each asking for permission from their teacher before approaching me to hug, or high-five or take a picture.

The tricky thing again became my ability to see them. Or not see them, as was the case here. Once out of my direct sight, I was unable to tell what the kids were doing or where they were standing, if they were making faces at me or flipping me the bird. I expected that some of them might try and run behind me, kick me in the back, or try and pull on Scoop's tail. But if that was happening, I was completely unaware. Happily unaware, actually.

I'd hold out my arm to envelop the children in a side hug for a picture, and I'd tap, or rub, their backs in a motherly fashion. About 15 kids in, it occurred to me that because I couldn't see anything out of my peripheral vision, there was a good chance that I wasn't rubbing their backs as I had intended, but perhaps some less appropriate part of their body.

"I could've been rubbing their fronts for all I know!,” I later revealed to Jason and some others, “Or worse! Their privates! DSS [Department of Social Services] probably thinks I'm a child molester!" 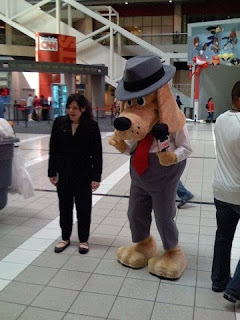 Luckily I didn't receive any angry phone calls, so Scoop kept it clean this time. My entire time with the kids was actually quite short, which was unfortunate, because once I was standing stationary, I really enjoyed throwing high fives and thumbs up to the kids. I may go down in history as the worst mascot ever, leaving my feet firmly planted on the floor and possibly inappropriately touching people, but I enjoyed knowing that I was the main attraction while still being blissfully unaware of what was going on around me. Perhaps I could turn 30 in the same fashion?

After everyone gave Scoop a hug, I headed back to the private room to take the suit off, and Day 327's new thing was over.

I've heard, since my experience, that there are individuals truly dedicated to dressing up like mascots and participating in something called the furry fandom. There is even a weekend convention in Atlanta called Furry Weekend.

I'm not here to judge these people (aka freaks), but I can think of nothing that I'd like to do less than dress up in a costume and hang out with others dressed in costume for a day, sweating my face off and making loud gestures and not talking.

I am actually less coordinated and more awkward in this suit than I am in real life. And that's tough to do.

But hey, furries, if that's your thing, rock on. And if anyone needs a costume, I know someone.
Posted by Stephanie Gallman at 6:00 PM

Email ThisBlogThis!Share to TwitterShare to FacebookShare to Pinterest
Labels: Jason B., Tour Kimberly