I, along with Elizabeth, really wanted to start Will 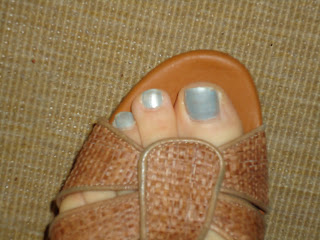 (aka Willie, aka Will.I.Am, aka Big Willy style) his very own blog entitled, "The Adventures of Willie J," as the thing I've never done before, but his Mommy said, "Um, I don't think so." Instead, I painted my toenails blue as Day 324's thing I've never done before. I did so in honor of Will's entrance to the world, and in celebration that he waited, against his mother's wishes, until I returned from Greece before arriving.

Elated by the baby news, I also tried to teach myself to juggle with instructions I found on the Internet. The lesson didn’t go so well, and I’m pretty sure I'm going to need to seek outside help on that one.

Maybe before Will turns one-year old, I will learn and then show up as a clown at his birthday party.

As for the blue toenail polish, it was fine. A little juvenile, but fine. Definitely more suited for preteens who still hang out at the skating rink. Fun for a while, but I probably wouldn't choose it again. I'm a woman, after all. Or at least that's what people keep telling me.
Posted by Stephanie Gallman at 2:30 PM

Email ThisBlogThis!Share to TwitterShare to FacebookShare to Pinterest
Labels: Elizabeth, Mark I., Trish