This has been a trying week and I'm struggling.

Struggling, because I decided to take a different route out of my office yesterday.  My mom got a FitBit for Mother's Day (she asked for one - my family and I aren't completely terrible people) and I've been trying to turn up the heat on my own steps in hopes of encouraging her.  So instead of taking the escalator, I opted to take the stairs.

Only as I began my descent, the right heel of my shoe got caught in the cuff of my left pant leg and I instead of walking, I more or less pulled myself down - hard - on the steps falling toward the first landing.  My phone and water bottle went flying and my knee banging all the way.

In front of people.

In front of coworkers.

I've taken quite a few spills in my day, so I actually have a strategy on how to handle them.  Maybe "strategy" is too strong - more like a response that involves, simply, get up, keep your head down, laugh it off and LEAVE THE SCENE AS QUICKLY AND INCONSPICUOUSLY AS POSSIBLE.

Unfortunately falling in my building is like falling at a hotel in Las Vegas.  Even if you want to run away and are physically capable of doing so, a swarm of company security guards will surround you and convince you otherwise.  I truly thought I was okay to keep walking out, but everyone asking me, "Are you surrrrre you're ok?" made me question if I really was.  Soon a guard with a first aid kit showed up with ice packs and an ace bandage wrap and I wanted to cry.

In hindsight, stopping to take a seat on the stairs to collect myself as the security guard suggested was a good idea, but I could've done without all of the attention and fanfare.

By the grace of God, even at my 5:15 pm departure time, there were but a few people who saw what happened and I knew none of them.

That is, until television attorney Nancy Grace comes down the escalator to my left and shouts at me, "Girrrrrrl, are you ok?!" in her signature southern draw.  While extremely kind of her to ask me, a complete stranger, if I was alright, her question attracted the attention of what felt like everyone in the building ( I mean, she's Nancy Grace?!) and with all eyes on me, sitting in the middle of the stairs, I wanted the floor to swallow me immediately.

My left knee is in a lot of pain, and walking today is a bit of a challenge, but the realization that I may no longer be cut out for high heels and/or am probably turning into my accident-prone mother has also bruised my ego quite a bit.

Worse than the fall, which seems so small in comparison to other huge things happening right now, is the emotional struggle I'm having over a special woman facing a troubling diagnosis.

Julie was a senior at the University of Georgia the year I was a freshman.  Though we were in the same sorority and would see each other at chapter meetings and fraternity band parties, I did not know her well.  But I remember her sweet disposition and kind voice and I can't recall anyone every saying an unkind word about her. 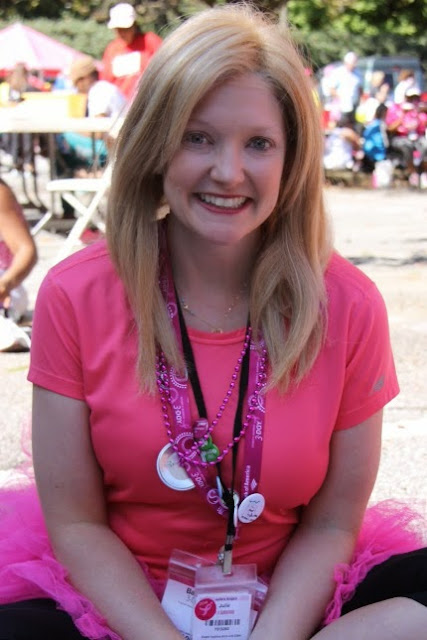 Since 2013, Julie has bravely fought triple negative breast cancer that has spread into her lymph nodes.  After being diagnosed a week after giving birth to her second child - a reality that truly takes my breath away every time I think about it - she has been fighting.

I know sororities don't always get the best reputation, but the true "sisterhood" that I have experienced from AOIIs of all ages rallying around Julie's during this time has been nothing short of inspiring.  There have been fundraisers, prayer circles, offers to babysit and bring meals.  While undergoing an experimental trial in Texas, sisters have donated airline miles and hotel points all to make her battle a little less stressful.

I've participated when able, following from a distance her ups and downs of her health, never once believing that she would be anything but victorious in her fight.

This week, Julie's doctors advised that the "time for fighting and treatment has passed and it is time for her to focus on going home, on her comfort and on her family."  While I remain inspired by Julie's grace and bravery and what her sister-in-law described as, "an abundant concern for others," this news leaves me struggling.

Struggling with how I'm supposed to feel - that everything happens for a reason and that God is in charge - versus how I actually feel - that this is colossally unfair.  I thought God never made mistakes, but this all feels like a huge mistake - that He got it wrong, in choosing this young, vibrant wife and mother to suffer such a diagnosis.

For Julie and the many people that love her, I am heartsick.

I believe in miracles and I believe in one for Julie and her family, while wishing for them peace and as much togetherness as is allowed.  I believe in God and good vibes, so I pray and dedicate yoga practices to Julie and her children and husband, her parents and brother and extended family.

I also pray for those who are close to Julie, who like me, are trying to understand why things like this happen to good people.

This is a little heavy for a Friday, and for that I'm sorry, but I ask of you, if you could take a moment this weekend to send up to whatever higher power you believe in prayers of peace and healing to Julie and her family.