Having attended (and documented) nearly 100 weddings in my lifetime, I truly thought I'd seen it all when it came to witnessing so many "big days."


The International Destination Wedding of a Co-Worker

Now if Justin and Emily were the kind of "co-workers" with whom I merely exchanged daily pleasantries, I could've easily declined their invitation, and wished them well with a nice gift. 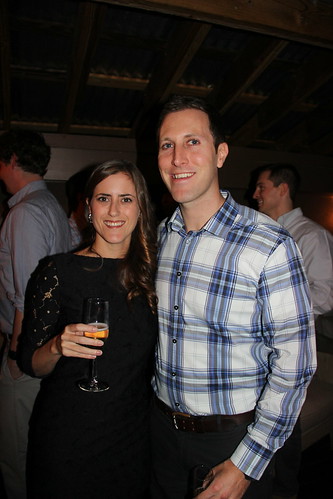 But they're actually my friends.  Like many of the people I work with, they're really good friends.  In fact, because of (or maybe in spite of) the stressful nature of our jobs that we have to perform, in close, communal working quarters for long, and sometimes weird hours, we're kind of like a family. 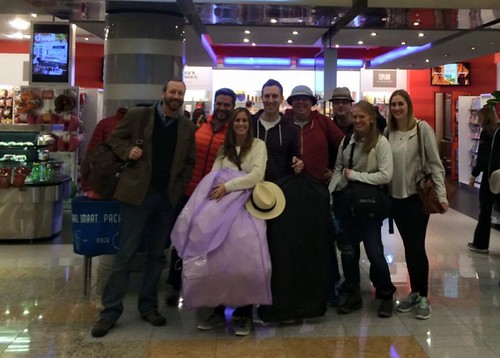 Perhaps it was that feeling of family that moved me to decide quickly when Emily and Justin's wedding invitation arrived, to just say yes.  I have a feeling my sense of adventure, love of traveling and overwhelming and constant sense of FOMO (that's Fear of Missing Out, Mom) also played a part, but without considering any of the specifics, I was in, and more or less assumed the details would work themselves out.

The details did work out (no thanks to me) and in February, alongside seven members of my work family, I flew halfway around the world - that's roughly 16 hours and 8419 miles - to spend 12 days in South Africa.

"Whoa!  What was that like?!" seemed to be the most popular question asked when I told others about my journey.

I'm not sure if the "that" referred to South Africa or traveling with coworkers, but my response was always the same: "It was awesome . . ., and a lot like going on a school field trip."

Like every successful field trip, ours had an instant and natural leader, Mo, who in addition to planning every. single. detail. of our trip, also had the distinct honor of officiating Justin and Emily's wedding.

Right out of the gate, he saw to it that the five of us traveling with him turned in our "permission slips," or cleared our simultaneous 11-day vacation with our managers.  Seeking permission for so many of us to be gone at the same time was somewhat awkward at first, especially since we were asking for vacation more than a year in advance.  We told them our plan and remarkably, and much to my concern that we could all easily be replaced, management quickly approved our days off.

With our "permission slips" signed, Mo proceeded with meticulous planning, which was almost immediately followed by asking everyone for money.

I'm not going to sugarcoat it, going to South Africa isn't cheap - at least in the way Mo planned it, which in my humble opinion, is the only way.  The flights are expensive, going on safari is expensive, golfing at Leopard Creek (aka the "Augusta National of South Africa") is expensive - but like every good class trip, completely worth every penny. 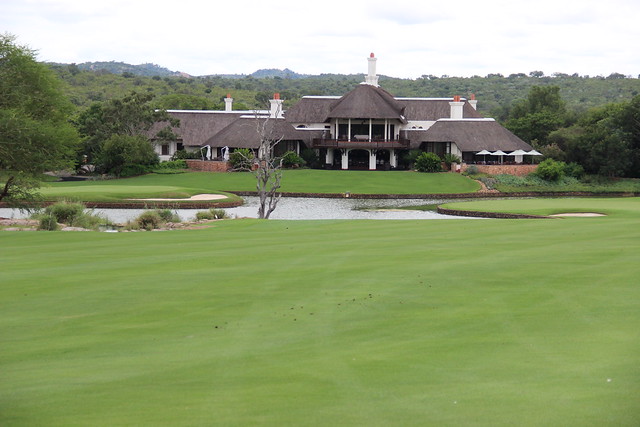 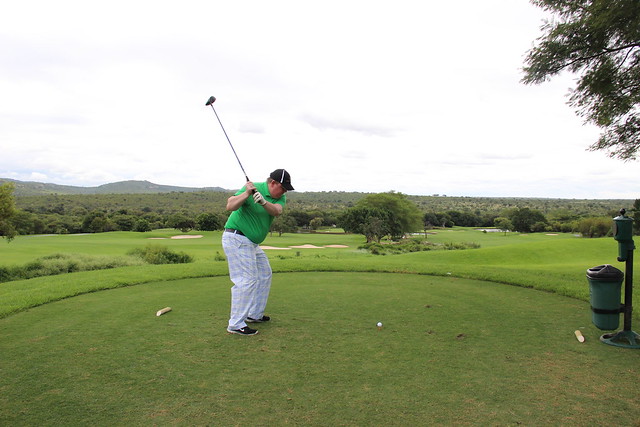 The American dollar is strong in South Africa, but in order for us to be able to afford to go, we saved, we skimped, and we did what all field-trippers would do - we fund-raised.  I cannot take credit for this purely genius GoFundMe page that raised more than $1000 in fun money and also raised a few eyebrows from people who thought it was inappropriate to ask for money from our friends to go on vacation.

To those people I say, if 90's R&B group TLC can raise money to make a new album, then why shouldn't we?!

For a year, everyone paid Chaperone Mo in installments, which meant I still don't know how much the trip really cost.   I do know it was paid for before we even left.  Plus, multiple payments meant multiple opportunities to be praised by Mo for turning our money in on time or publicly shamed for not turning it in at all.

As if collecting money from six clowns for an international trip wasn't punishment enough, Mo's decision to take charge of planning the trip meant that once we arrived, he also became solely responsible for telling us what to do, what to wear, how to act at nearly every hour of everyday.

While I'd like to think he enjoyed his role as our group leader - I mean, he carried an itinerary - I think he probably could've handled us asking questions like, "What's for dinner?" and "What time do we need to be ready in the morning?" a hundred less times than we did. 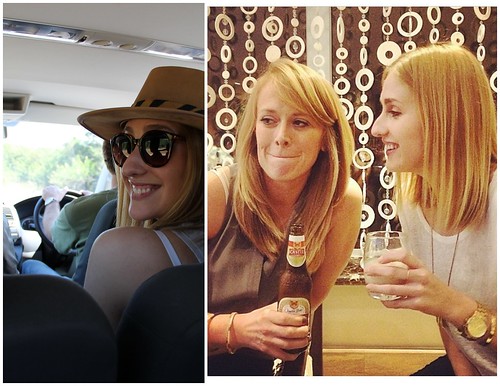 Mo also encouraged the buddy system, which meant, "Look after your roommate," and make sure he/she is where they need to be when they need to be there.  This strategy worked for the most part, especially because my buddy was Leigh, the only other female on the trip.  She ranks pretty high on the "awesome travel buddy" list.  She's laid back, up for anything, and best of all, she indulged my "school girls on a field trip" desire to run back to our room after our scheduled activities so we could gossip about the stupid boys we were traveling with.

You know how school kids love to "call seats," as if the back of the bus or the right side of a vehicle is some coveted ground where only they should be allowed to sit?

We did that.  Right side for life!

You know how adolescents always seem to find the smartest one in the group to tease relentlessly for seemingly everything he does?

We did that.  Sorry, Devon.  But you shined a safari floodlight on a complete stranger's neck for the entire night drive! 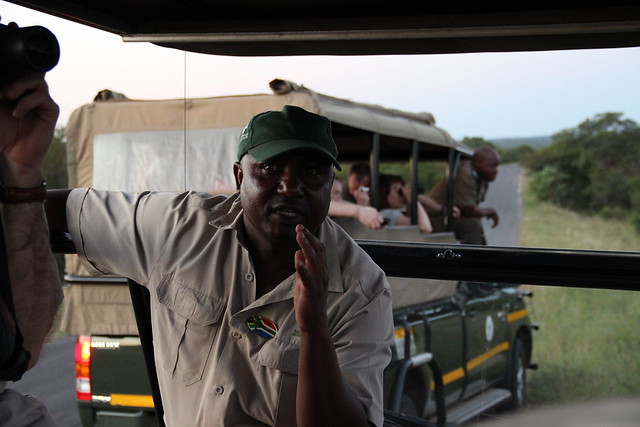 You know how when your most favorite teacher named Oupa, who had always been a wealth of information about Kruger National Park and animals, told you a joke but he did it with a straight face so you thought he was serious and you believed every word he said?

We did that.  And we shared what he told us with others, as if it was fact.  (FYI, newborn baby giraffe hearts don't just start beating when they hit the ground after falling from their mother.) 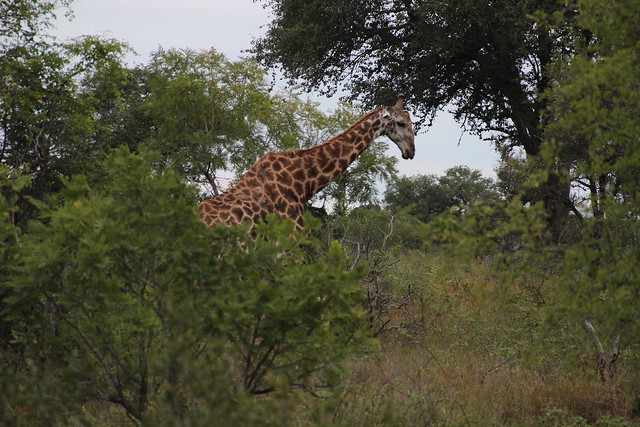 You know how when you were younger and someone would mention poop or sex and you'd completely lose your mind and giggle like an idiot?

We did that.  However I'm fairly certain if I was ever forced to identify safari animal dung, I could do it.   We also said things like, "Is that monkey mounting that other monkey?  Oh. My. Gahhhhhh.  Are those monkeys doing it?!!!  You guys, those monkeys are doing it!"

Then we would all laugh and take a thousand pictures like this one: 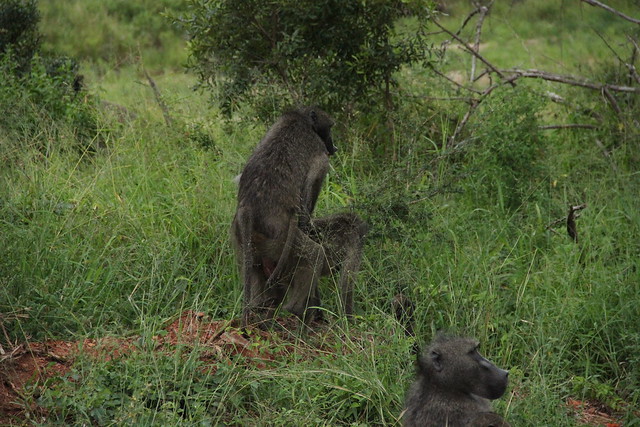 And you know how sometimes on school trips when you got forced into tour groups with people you didn't really know that well or maybe didn't like and you swore you'd separate the minute your group merged with another group but you never did because you found out you really liked your group the best?

One of the suckiest things about getting older (besides hangovers, responsibility, wrinkles and gray hair) is that I also feel myself becoming more jaded.  I suppose that also has something to do with also being a journalist, but anymore, I feel like it takes a lot to excite me, a lot to rile me up. 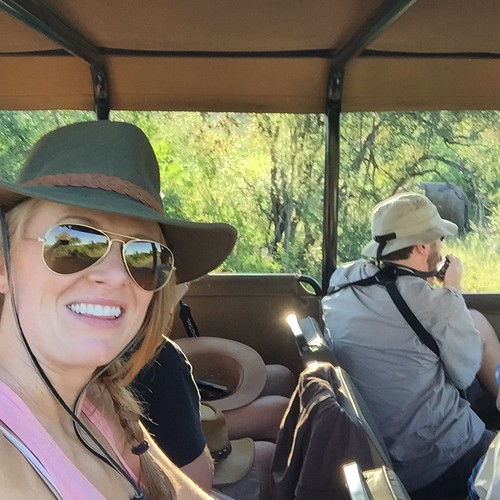 Yet, there were so many moments on this trip that I found myself rendered speechless by the beauty of what I was seeing around me, the opportunity I'd been given - by God for giving me such a great life, by Justin and Emily for inviting me to this wonderful place, by Mo for planning it all. 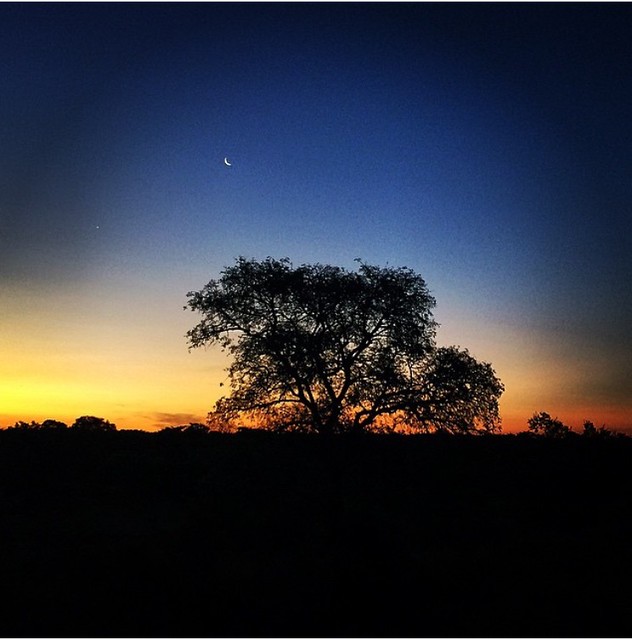 As I'm sure you can imagine, there wasn't much quiet time with this group, but I'm certain my travel mates felt it too, for there were moments when we'd all be silent together.  I guess it takes going to South Africa to impress six journalists enough for them to shut up - and not just because we didn't want rhinos or elephants to charge us. 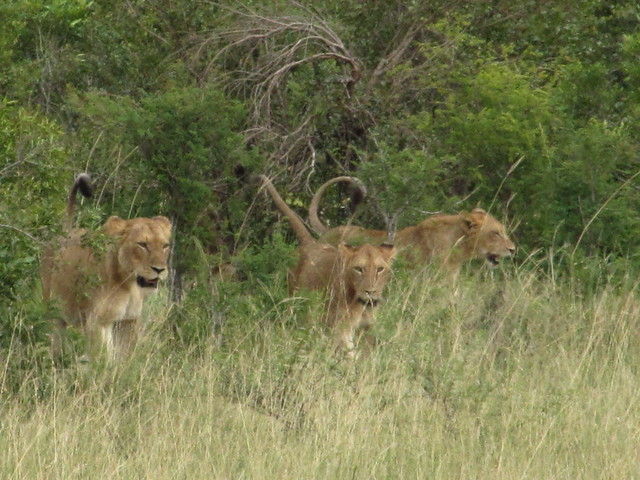 There were times toward the end of our safari experience, we got used to seeing impalas and zebras on our drives and began looking for more.  We got spoiled and wanted to see families of lions or National Geographic-style attacks, but mostly we were amazed, feeling the wonder and curiosity I thought only happened to school kids on a field trip. 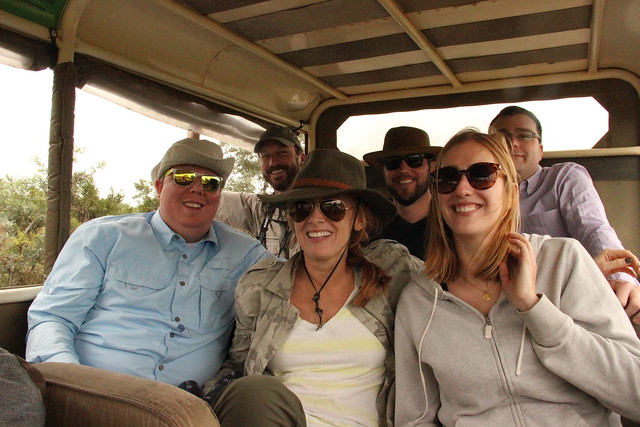 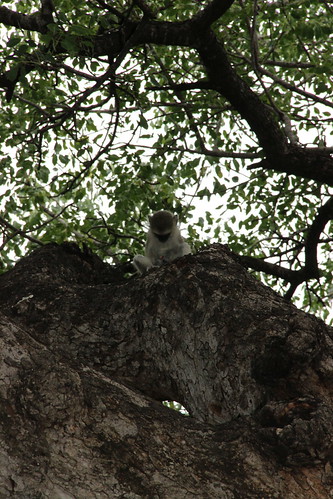 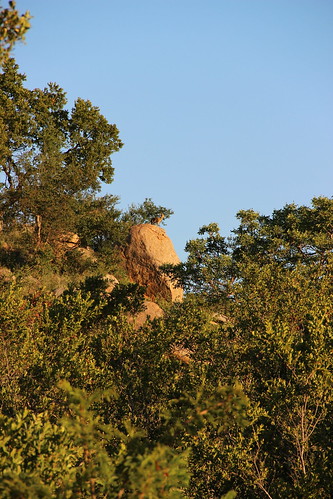 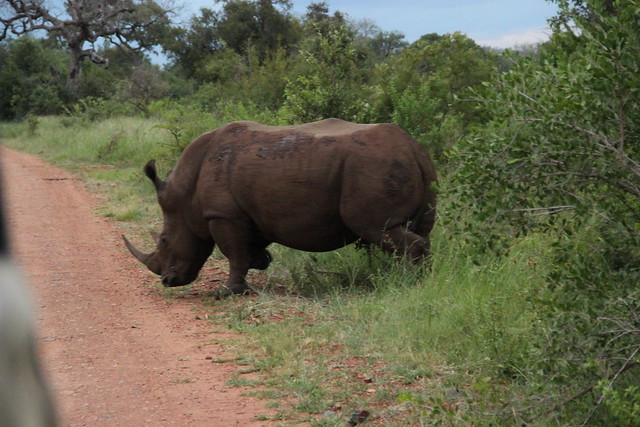 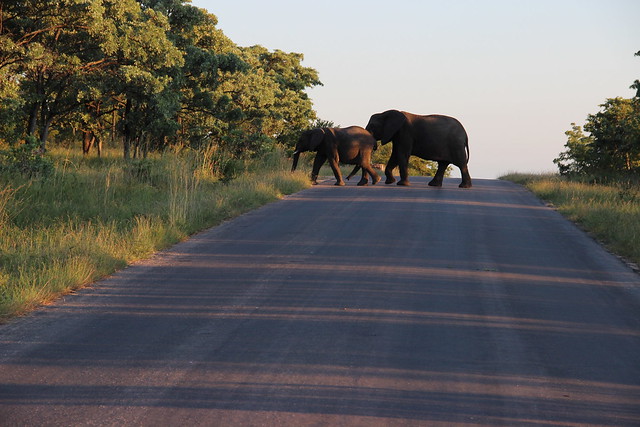 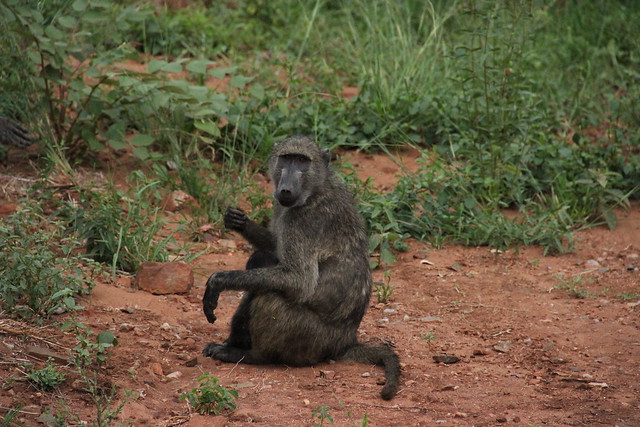 At night, back at the charming Buhala Lodge where we stayed, we'd drink good wine and delicious food under the stars, served to us by our favorite bartender Moses.  We'd talk about personal stuff like the last time we cried, then quickly go into lighter things like what our favorite part of the day was.  Then we'd spend the rest of the night making fun of each other.

Best. Field Trip. Ever.
Posted by Stephanie Gallman at 4:50 PM