accentuate the positives (of new orleans).

"How was New Orleans?!," I was asked by friends and coworkers last month after returning from a long weekend at Jazz Fest.

Normally such innocous pleasantries don't cause me anxiety (which is, in and of itself, remarkable because I'm anxious about nearly everything), yet unsure of how to honestly answer this question without immediately making things awkward, I dreaded people asking me about it.

First of all, do people really want to know about my vacation (or anyone's vacation, for that matter?), or are they are just being nice?  Secondly, if someone was sincerely interested, I imagine a simple, "It was great!" or "We had a blast!" is probably all they're looking for - spare the details and keep it positive.

Yet, I found myself conflicted and unable to hide how the trip really was for me, because while there were definitely some musical and culinary highlights, as well as some good laughs shared with friends, the best words I can use to describe my trip to New Orleans are "complicated" and "off."

Jacob and I were off, the music was off, I felt . . . just off.   And for everything to feel "off" in a town that is always "on," meant a lot of my super high expectations for the trip fell short.

I suppose I could've just omitted blogging or talking about New Orleans altogether - I mean who wants to read about a bad vacation?

I had to chuckle, though, when I looked at the more than 200 photographs I took while I was there - you certainly wouldn't know that anything was off.  Any evidence of the the not-so-great moments wasn't captured at all.  Instead, smiling faces and beautiful scenery - lots of proof that there were plenty of good times. 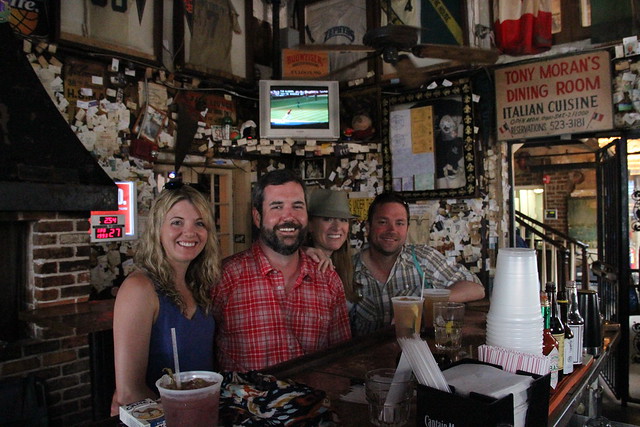 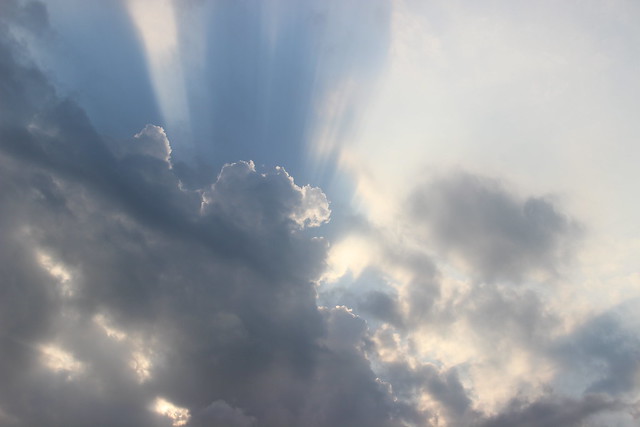 But I'm no bullshitter - so I felt the need to provide you with proper context.  These pictures tell the story of a trip that didn't exactly live up to my expectations, but it wasn't all bad.  Consider this me "accentuating the positives" of the trip, which included -

The kindness of strangers -

I was so fortunate to have the opportunity to interview Vance Vaucresson for a piece I wrote for CNN.  If there was such a thing as Mayor of Jazz Fest, Vance would win, hands down.  In the few hours we spent together, our conversation was interrupted repeatedly by festival goers coming to his booth to say hello.  He had so many stories about his life in New Orleans pre-and post-Katrina, I swear I had enough material to write five stories about him. 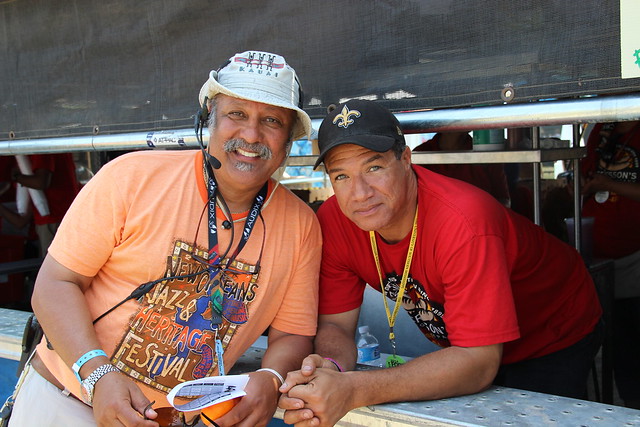 The first day of Jazz Fest, we befriended a group of people from Atlanta who invited us to set up our chairs next to them.  We all became fast friends and Jacob and I agreed that with all the negativity in the world, there's nothing quite like a music festival to restore your faith in humanity.  I realize how hippie and flaky that probably sounds, but in all seriousness, people at Jazz Fest are just really nice and friendly. 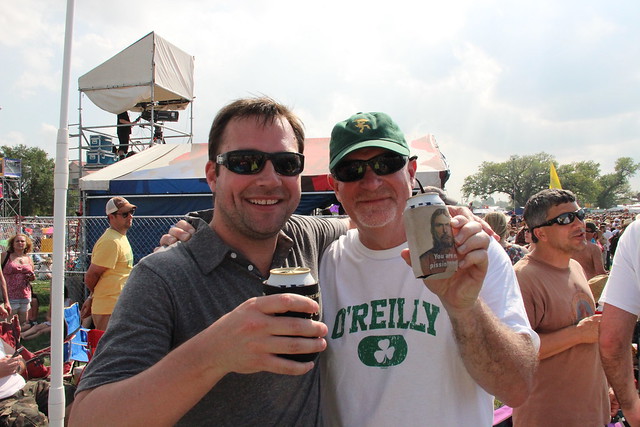 The first time I went to Jazz Fest in 2005, I was completely and pleasantly surprised at the super important role of food at the festival.  As in, it's as important as the music.  Most of the vendors have been serving gourmet New Orleans-style cuisine for decades.  No cotton candy and corn dogs at this festival - we're talking Shrimp and Grits, Crawfish Monica and so. many. Po boys.  We kept ourselves well fed, both at the fair grounds and everywhere else (Thank you, Cochon, Herbsaint and Atchafalaya.) 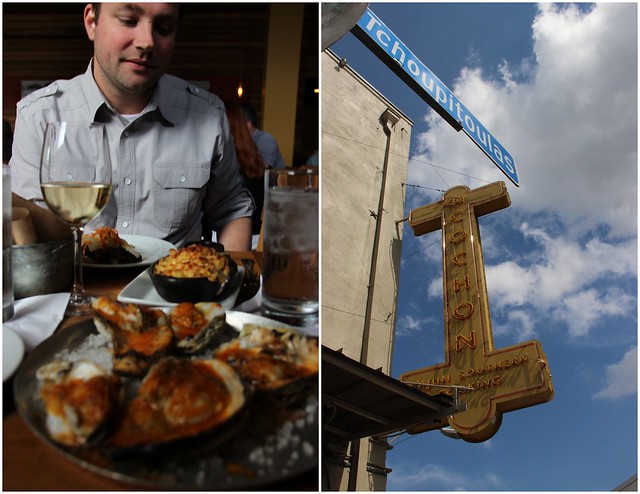 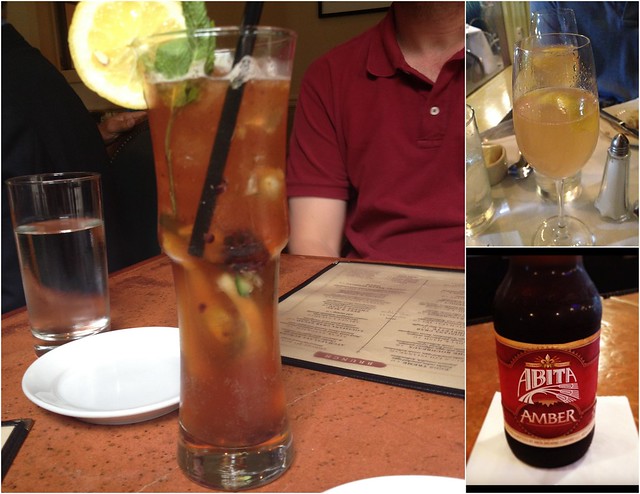 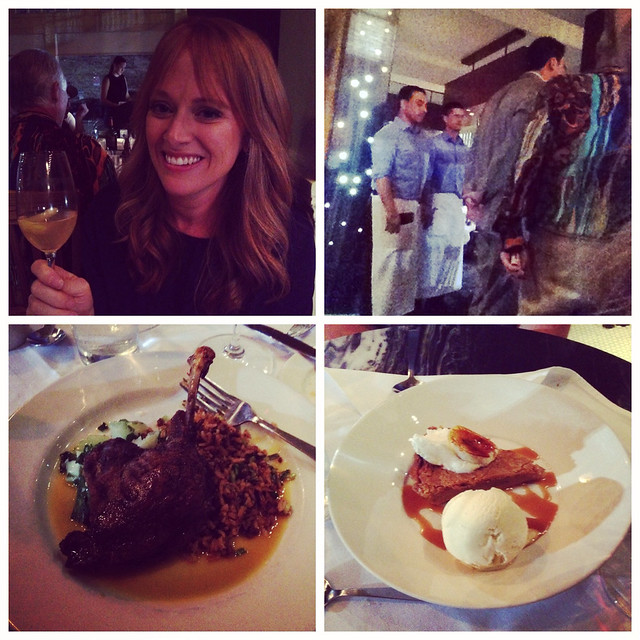 Music highlights for me included Jason Isbell and Jon Cleary performing "Stagger Lee" at a small club on Frenchman Street.   Galactic and Phish put on good performances, but honestly with so many wonderful musicians in the same city, I'd hoped for more surprise guests and collaboration.  Still, though, Jazz Fest is like pizza and even when it's bad, it's still pretty good. 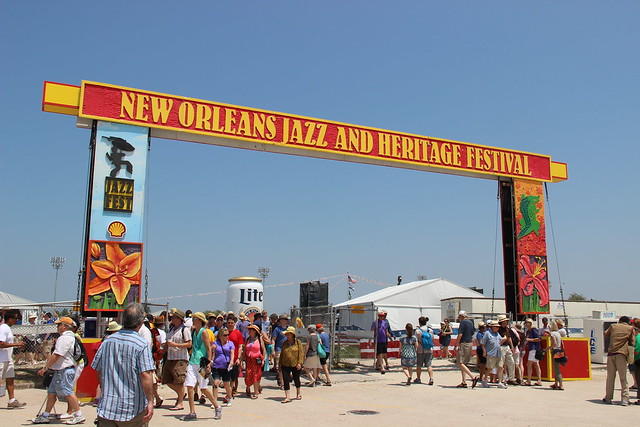 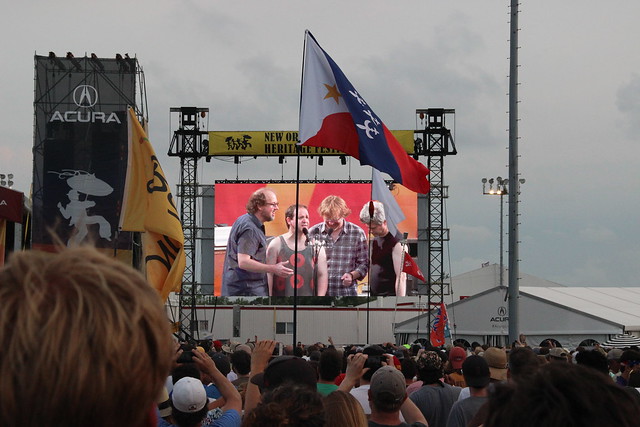 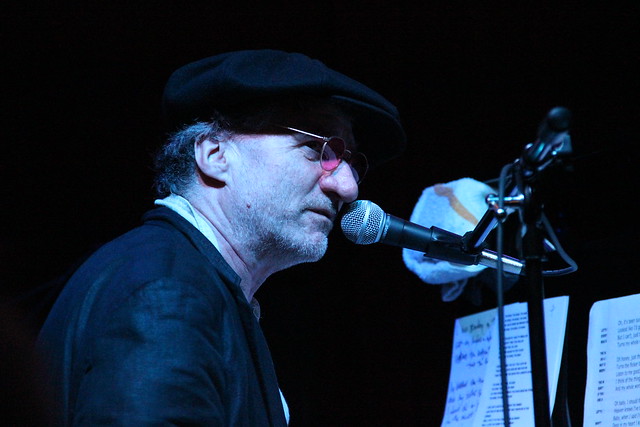 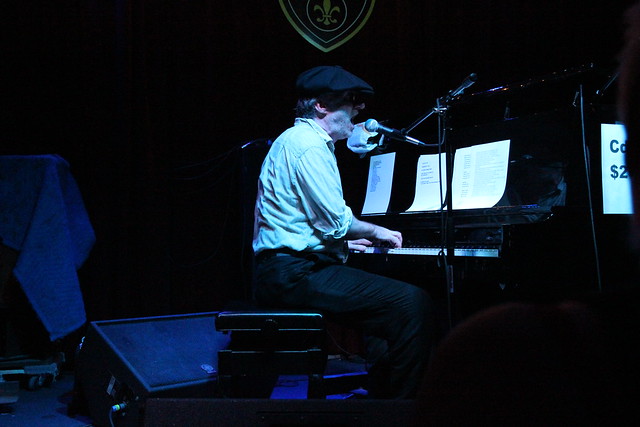 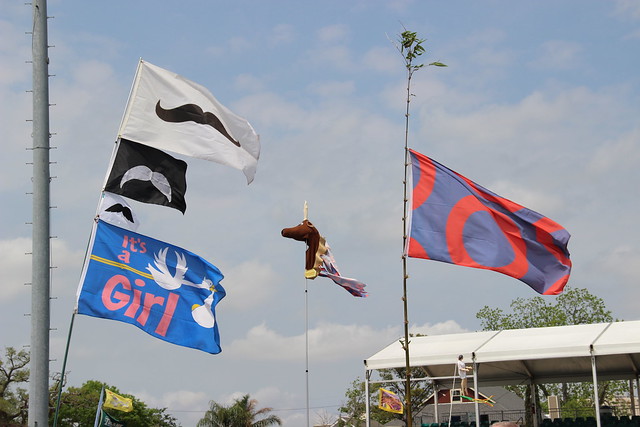 New Orleans is so rich in culture and history and once you get away from the French Quarter, the city is so beautiful.  The days we had to just wander around the city were my favorite. 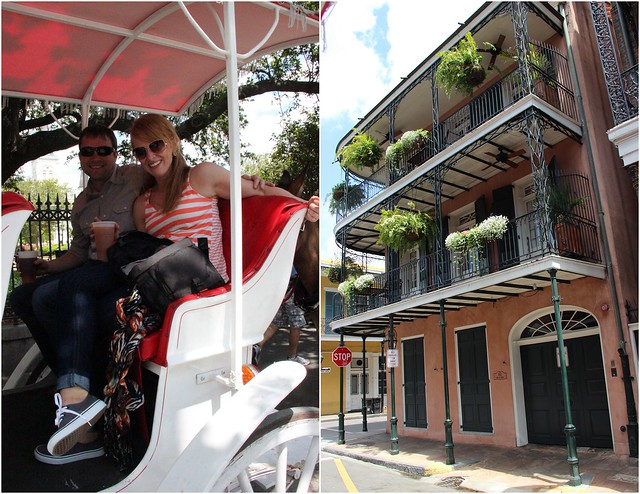 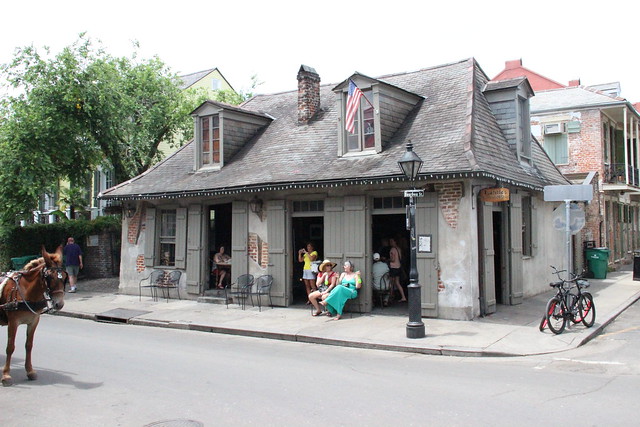 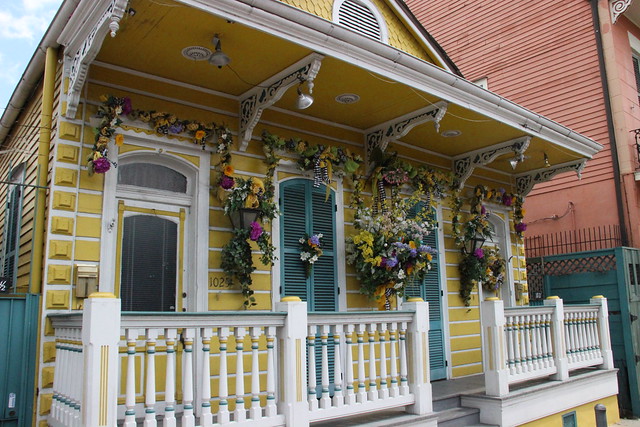 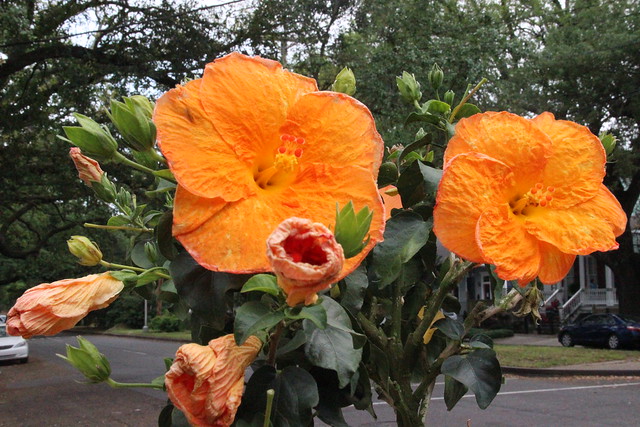 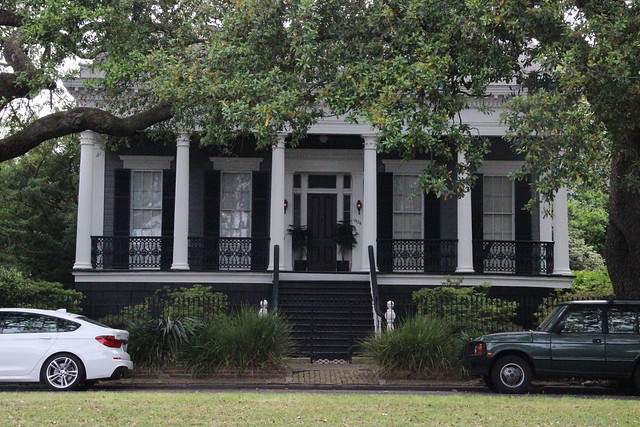 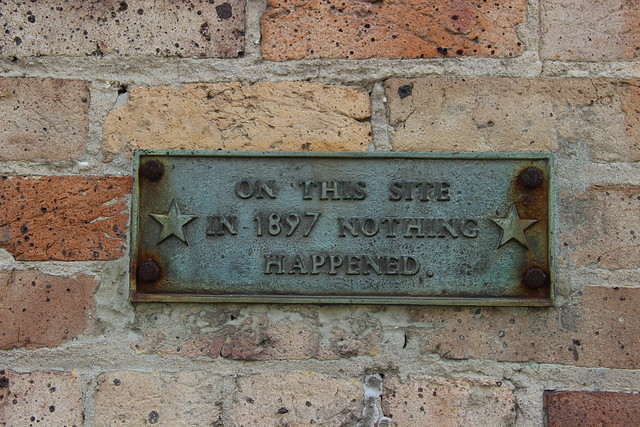 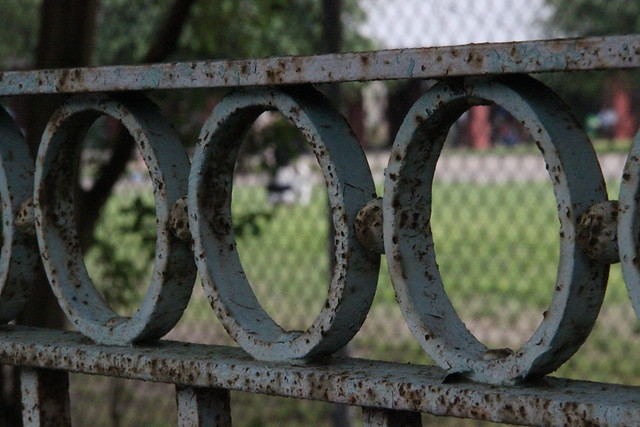 Social media, for better or for worse, is a lot of smoke in mirrors.  We put the most positive versions of ourselves out for the world to see.

Sure, I've been annoyed at what I consider a tendency of some to over.share.every.minute.detail.of.everyday with the world and others who disguise the tremendous dysfunction in their lives with glossy, smiley pictures of everything looking great.  But thankfully I learned long ago not to compare my insides to someone else's outsides.

I think that most of us treat Facebook and Twitter like wearing makeup - we're really looking really just looking for an opportunity to accentuate the positives in our lives, not mislead anyone into thinking everything is perfect.


I took fun pictures of New Orleans, but the trip wasn't without its challenges.

Thanks to a faulty zipper on my luggage, when I arrived back in Atlanta, I found several pieces of my clothes cruising solo on the carousel and my suitcase looked like this: 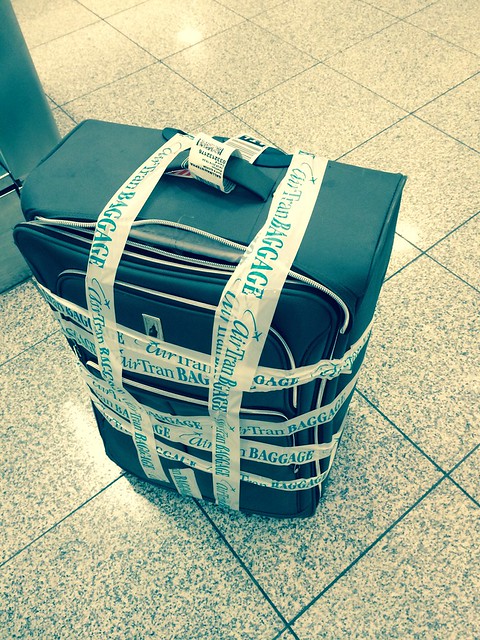 Looking and feeling like we had been to a war, Jacob and I looked at each other and then we looked at the suitcase, and then we burst out laughing.