what I learned from the Sports Illustrated Swimsuit edition.

I think I might've scared, or at least bewildered, every man in my office this week when I announced my excitement over the 50th Anniversary issue of the Sports Illustrated Swimsuit edition.

"I've been obsessed with it since I was a little girl!," I exclaimed to a handful of male colleagues, who responded with raised eyebrows, confused looks, and nervous laughter.

My admission and our subsequent conversation about the magazine sparked a flood of nostalgia with all of us and soon names like Stacey Williams and Marissa Muller were getting tossed around, followed by wistful sighs. It seems every man - gay or straight - has at least one, if not a plethora, of not-so-G-rated memories associated with the annual swimsuit edition.

Most were then understandably confused over my (a girl's?!) adoration for the magazine.

Yes, I realize that my fascination with beautiful models in bikinis, both as an adolescent and now heterosexual woman, is strange.  Creepy, even.  I think I can hear my parents and feminists everywhere cringing at the very thought.

Like a lot of my weird quirks - I don't know why or how I even started caring about this magazine or how this one issue emerged superior to all of the YM, Seventeen or Teen magazines I collected.

Perhaps it was my own young dreams of becoming a model myself?

Maybe. (I mean look at those serious pics?!), but those dreams were short-lived.  I reached the peak of my child modeling career at age 12 and then acne and hips came into my life.

Without a doubt, my obsession with this magazine and all of the others has contributed to my own body image issues and society's unattainable standards set for women.  And yes, that sucks.  But I can say with sincerity, that I actually learned a lot from the Sports Illustrated Swimsuit edition, and it wasn't all negative.

For instance, a lot of the exotic geography I know is due in part to the locations shot in the magazine.  Places like St. Kitts, the Windward Islands, Seychelles.  I don't even know how to pronounce "Seychelles," but I know it exists and I know it's gorgeous and I know I want to go there because Sports Illustrated showed me how amazing it is.  See?

Even Martha's Vineyard looked magical with Tyra Banks there.

I developed a respect for artistic photography.  Seriously, I did.  Stop laughing.  I know that claiming to look at the Sports Illustrated swimsuit edition for photography is like claiming to go to Hooters for the quality food, but the photographers associated with this issue have always taken risks - using light and nature and body placement in ways other magazines don't.

My love of the magazine led to my obsession with the HBO Documentary about the making of the Sports Illustrated swimsuit edition, where I learned that even for the most beautiful women in the world, photoshopping happens.  And the life of a model isn't all that it seems.  Sometimes models get up before the sunrise, they are forced to splash and jump around in the freezing ocean in the middle of the winter, and when they're making sexy faces at the camera, sometimes they're thinking about Oreos.  Kathy Ireland actually said that.

Perhaps the most shallow, though certainly the most monumental lesson that I learned from the Sports Illustrated Swimsuit edition has stayed with me into adulthood.  I learned that it is possible for redheads to be hot - like model hot. 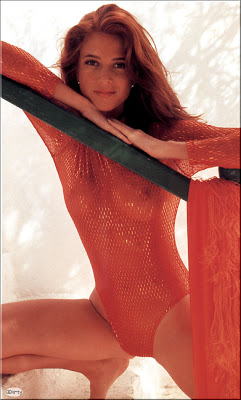 I have always had a complicated relationship with my hair color.  When I was young, it was more hate-hate than love-hate since being a redhead when you're 12 is more freakish and weird than unique and cool.  But seeing Angie Everhart opened my eyes to the possibility that redheads can be different and beautiful - and be in Sport Illustrated.

Maybe I should've given my modeling career a second thought?

I'm thankful that we have the constant capability of learning and changing how we feel about ourselves and the world even in the most unlikely scenarios - even in a magazine photo spread.

Thanks for being my teacher, Sports Illustrated Swimsuit edition.

Follow my blog with Bloglovin
Posted by Stephanie Gallman at 12:56 PM